The Centre's Approach to Southern States is Step-Motherly: V. Narayanasamy

Dismissing the possibility of snap polls, the Puducherry chief minister is confident that ahead of the 2019 Lok Sabha polls, a leadership would emerge to take on Modi with the coming together of secular parties. 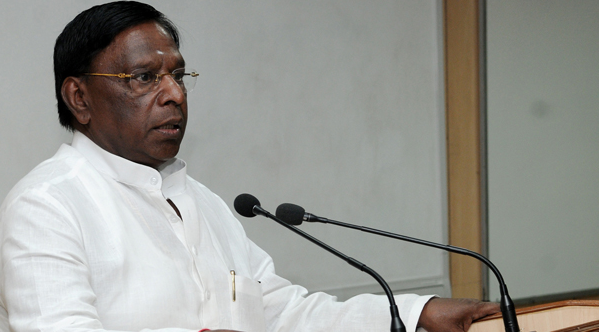 V Narayanasamy is one of the two chief ministers of the Grand Old Party at a time when Prime Minister Narendra Modi had famously predicted that the Congress would remain limited to the three Ps–Punjab, Puducherry and Parivar, an obvious reference to the Gandhi family.

With dramatic developments in post-poll Karnataka energising the opposition, especially the Congress, Narayanasamy seems unruffled by the Narendra Modi-led dispensation’s attempts to put down tiny Puducherry in different ways.

In an interview with The Wire, the 70-year-old Congress leader speaks at length on various issues, including the latest attempt by the Modi government against the Southern states through the ‘lopsided’ terms of reference of the 15th Finance Commission.

“The Prime Minister all the time talks of cooperative federalism, but it is like a dictatorship because the Central government wants to dictate to the states while controlling the entire financial power itself”, he alleges.

Narayanasamy, who was a Union minister, including minister of state in the PMO during the UPA-II regime, also gives vent to his anger and frustration on the way Kiran Bedi, the Lt Governor of the Union territory of Puducherry, “interferes” in the working of his government and “puts spokes” in development works, accusing her of trying to run a “parallel government”. He feels that his Delhi counterpart Arvind Kejriwal, who faces a similar problem is “more lucky”.

Dismissing the possibility of snap polls, the chief minister is confident that ahead of the 2019 Lok Sabha polls, a leadership would emerge to take on Modi with the coming together of secular parties. Edited excerpts:

SG: What are the grievances of the Southern states over the 15th Finance Commission’s terms of reference?

VN: Basically the terms of reference of the 15th Finance Commission, constituted by the government of India, (showed that the) approach is step-motherly against Tamil Nadu, Puducherry, Karnataka and even for that matter Andhra Pradesh. We have (taken family planning initiatives and achieved) population control. But 15th Finance Commission’s terms of reference has the (base) year as 1991, not 1971. Going by that (parameter), states which have achieved population control, like the Southern ones, will be affected in the transfer and allocation of funds. These states should have been rewarded. (But) Instead of rewarding, the government of India is going to reward states where population control is not there. 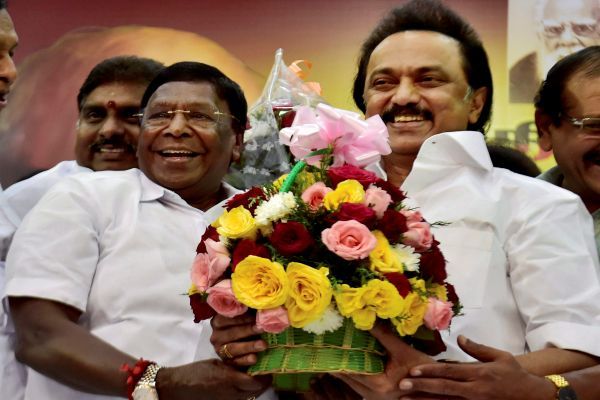 Second, as regards NEET (National Eligibility-cum-Entrance Test), states like Tamil Nadu and Puducherry have state boards which have their own syllabus. But NEET is conducted on the basis of the central board’s syllabus.  So, on the education side also, these states have been deprived of their rights.

Third, allocation of funds by the Centre is done under central schemes and centrally-sponsored schemes to States and Union territories. The government changes norms every time. Sometimes they say the ratio is 75:25, sometimes 60:40. Now, for the mid-day meal scheme, the norm has been made 50:50. By doing this, the states’ burden is increasing.

They (the Modi government) disbanded the Planning Commission for the simple reason that if it is there and if the states need additional funds, those will have to be routed through the commission. The Prime Minister has to go by the Planning Commission (recommendations). Prime Minister Narendra Modi wants to take financial control (to decide) over which state should get how much money. The Prime Minister all the time talks of cooperative federalism, but this is like a dictatorship, because the Central government wants to dictate to the states by vesting the entire financial powers with itself.

Another term of reference is regarding the decision of the Goods and Services Tax Act. A decision has been taken by the GST Council that states will be compensated for five years to the extent they are losing. The Bill has been passed by Parliament and approved by the Council. How can the 15th Finance Commission review this? It is not a superbody.

In fact, we tried our best –the governments of NCT of Delhi and Puducherry – for including these two states with legislature in the 15th Finance Commission, but they have not agreed.

Both the states wanted that we should be included in the 15th Finance Commission’s terms of reference so that we get our due share. Now, we are not under the finance commission, so we have to be at the mercy of the finance ministry and the home ministry. That is how the government of India wants to usurp the powers of the states, which is unacceptable.

Therefore, we met the President of India and registered our protest. The President has the power to revise the terms of reference, so we gave him a representation. Ultimately, I find that the government of India wants to interfere in the powers of the states.

Puducherry and Delhi look similar as regards the problems faced from Lt Governors. Do you think Arvind Kejriwal is luckier than you?

The current Lt Governor in Delhi (Anil Baijal) is not interfering in the administration unnecessarily. But, the Lt Governor of Puducherry, (Kiran Bedi) is not allowing our government to function smoothly and is putting spokes on every development activity, including the policies of the government.

The Puducherry government has more powers than the Delhi government because land and law and order, services and finance are under the control of the state government in Puducherry (unlike in Delhi).

The Lt Governor has to act on the aid and advice of the council of ministers. She has no independent powers. In fact, under Article 239 (A) and Article 240 of the Constitution, the President shall ensure regulation for peace, progress and good governance of the people of Puducherry when the Assembly is not existing, But when the Assembly comes into being, the legislature is supreme.

The issue of day-to-day interference by the Lt Governor in Puducherry is not in the Constitution (not according to Constitution), the Union Territory Act and business rules, but she wants to run a parallel government. Therefore, Kejriwal is lucky from the point of view of the Lt Governor compared with Puducherry.

I have brought this (interference from the Lt Governor) to the notice of the Home Minister and Prime Minister and have written several letters to the Lt Governor, too, reminding her that “you are violating the rules”, but no decision has been taken by the government because the BJP is ruling the government of India and, therefore, is not bothered about our government. They are not coming forward to enforce the rules and actual provisions of the Act. They are not resolving the issue and want it to escalate because I am a Congress chief minister.

In neighbouring Tamil Nadu, Modi is attempting BJP’s entry through the backdoor. How you see it? DMK leader M.K Stalin has alleged that the Centre is helping the state government to stay afloat? Besides how do you look at superstars Rajinikanth and Kamal Haasan entering politics?

It is clear that the BJP is ruling Tamil Nadu by proxy because the Tamil Nadu government has become subservient to the BJP.

In fact, I can give the example of the Cauvery water issue. On the Nirav Modi bank scam, attacks on Dalits and on Cauvery waters, the Congress party in Parliament wanted a no-confidence motion against the Prime Minister and the BJP government at the Centre. Several other opposition parties too wanted the motion.

But, in the name of Cauvery waters, the BJP instigated the AIADMK MPs to stall Parliament to avoid facing the no-confidence motion.

On the other side, Chandrababu Naidu’s Telugu Desam Party wanted a no-confidence motion on the issue of Special Category Status for Andhra Pradesh. They (the BJP) did not agree. They used AIADMK for the purpose of stalling the proceedings of the House. From this, it is very clear that AIADMK is acting as the ‘B team’ of BJP.

The AIADMK government lost majority and that is why they disqualified 17 people to save the government. The matter is before court.

(As regards Rajinikanth and Kamal Haasan) They have every right to start a party. I wish them well. There is a long process for any political leader to emerge. We will have to wait and see. Ultimately, the people are our masters, they have to decide who they consider as their leader.

The Prime Minister says that Congress is now limited to Punjab, Puducherry and Parivar. The BJP is also raising the ‘dynasty’ issue contending that the fight ahead is between “parivarvaadi” and “parishramvaadi” – between those for the palace and those for the toilers.

History will repeat itself. At one time, the BJP had two MPs in the Lok Sabha, today they are in power. Politics is never static. The situation will change. The BJP wanted to come to power in Karnataka through the backdoor as they did not have a majority.

Do you envisage early Lok Sabha polls along with MP, Chhattisgarh and Rajasthan? How do you see the picture after the polls?

I don’t think there will be early polls. Now this (Karnataka) is a lesson for all secular parties. Let all of them get together to defeat the communal forces.

It is too early to predict (outcome of the poll) and (depends on) how secular parties join together.

But there is also the question of leadership.

When the question is of secular parties joining together, the leadership will emerge. Congress is the only party which has presence all over the country, which has ruled the Centre and the states several times. All political parties know this.

So, leadership will not be an issue?

I think leadership will emerge by consensus. The Congress should talk to all like-minded parties and bring them together. It should take the lead. Be ready for 2019….Sonia Gandhi, Rahul Gandhi and Manmohan Singh will play a crucial role.