Being a Tamil in a Post-Jayalalithaa World

The political vacuum in Tamil Nadu comes at a time when the divergence between the fundamental interests of the state and India are beginning to accelerate owing to demographic trends. 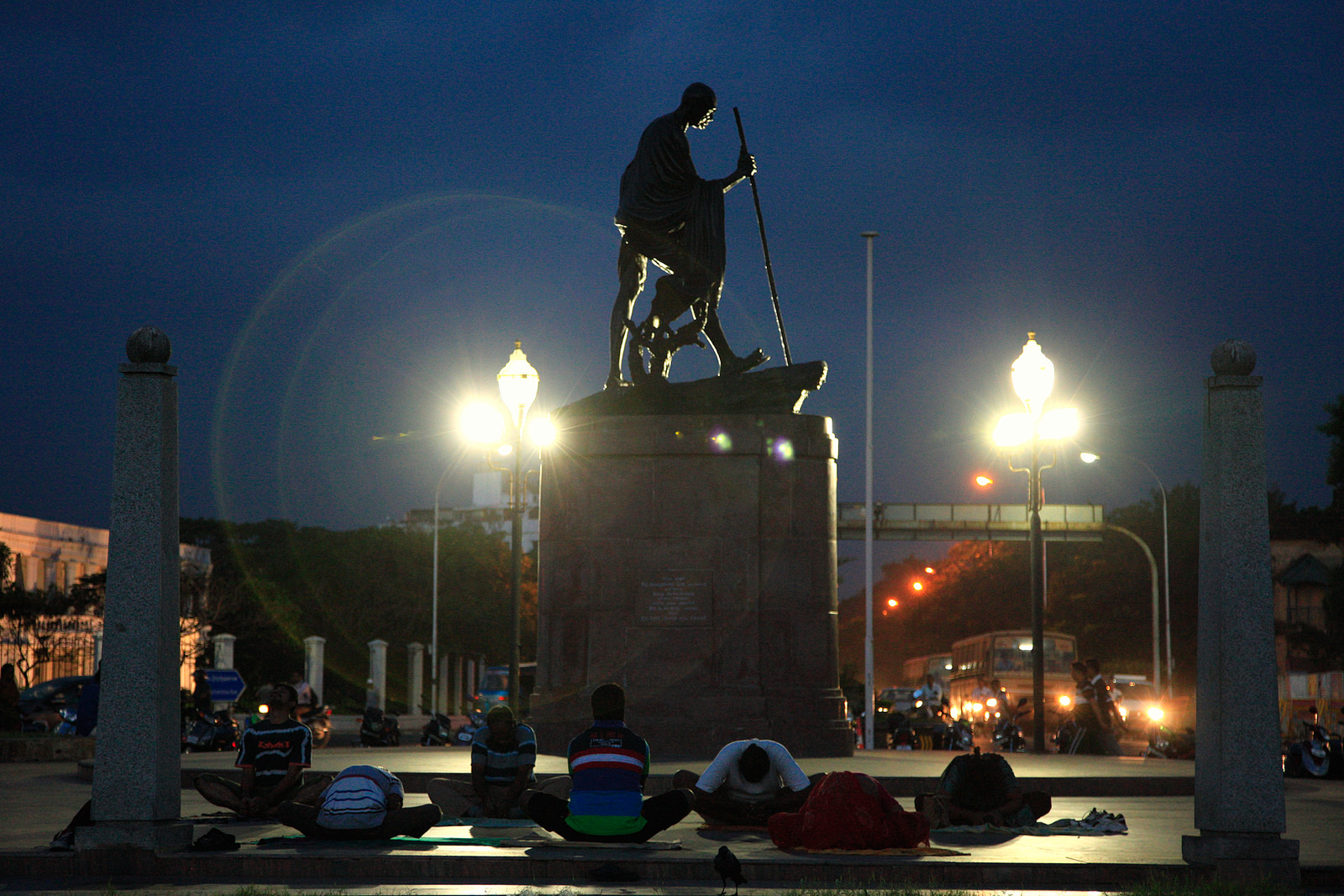 In September 2016, when chief minister J. Jayalalithaa was still in charge, Tamil Nadu was the only large state and AIADMK the only party in parliament to have opposed the GST on the grounds that it was an assault on states’ rights. Jayalalithaa was also the only chief minister to vociferously oppose the Fourteenth Finance Commission’s (FFC) formula and make it a poll issue. She won the elections. Tamil Nadu was one of the few states that opposed Ujwal DISCOM Assurance Yojana (UDAY), which Jayalalithaa described as an accounting trick that impeded states’ fiscal autonomy. Then there’s the National Food Security Act, which Tamil Nadu refused to roll out by calling it unjust.

In the time since, after Jayalalithaa fell ill and passed away, the Tamil Nadu government has either forgotten its opposition to or reversed its position on every one of these issues. Now, the AIADMK has gone silent on the GST. Even when faced with a deficit, the incumbent chief minister or finance minister have not raised the FFC’s formula as an issue in any serious way. The government has signed up for UDAY. Worse, the state that had one of the most generous and effective PDS systems has signed up for the inferior National Food Security Act.

Each of these decisions that the Tamil Nadu government has actively made or has passively acquiesced to gives up some of the state’s governing authority and fiscal space to Delhi. For all her faults, Jayalalithaa fought for states’ rights; she was consistent and forceful on the subject right from her days as a Rajya Sabha member in the 1980s.

The AIADMK party that she left behind, meanwhile, seems to have none of her passion for standing up to Delhi. Her reasons were often complicated: she tolerated absolutely no checks or balances and liked the spectacle of political grandstanding. But that’s the reason politicians exist in a democracy. In the months since her death, it has become apparent that the personal ambition of a politician isn’t as prohibitive to society when the likely alternative is abject incompetence and lack of principles.

M. Karunanidhi, a five-time former chief minister and one of the original stalwarts of states’ rights in India, too has suffered a health setback and hasn’t been seen in public for several months now. That’s a twin blow to the state that has had strong-willed, charismatic chief ministers who excelled in political slugfests when it came to dealing with Delhi. As if to confirm this worry about the loss of a champion in the Tamil corner, the Union minister for urban development M. Venkaiah Naidu reviewed projects from the state secretariat. Further, Naidu made a speech where he declared, “my cooperation depends on your operations, otherwise, there will be separation.” It is safe to assume no union minister would have even considered this comically inept attempt at grandstanding had Jayalalithaa or Karunanidhi been the chief minister.

To add insult to injury, the old language issue has been rekindled. It’s tiring that generation after generation the Tamils have to tell people and politicians from north India that Hindi isn’t India’s national language. Or that most Tamils don’t think it’s either necessary or useful to learn Hindi. Contrary to silly explanations that many are fond of giving, that learning Hindi improves one’s job prospects, the only job that Tamils have been denied because of a lack of fluency in Hindi is the job of prime minister of India.

Each of these issues, when taken in isolation, is a routine thorn in the flesh of a federal system. They can be reversed in a democratic setup by careful negotiation and policy shifts. But the political vacuum in Tamil Nadu comes at the most inopportune of times when the divergence between the fundamental interests of the state and India are beginning to accelerate owing demographic trends. This isn’t something that a different government in Delhi with a different policy prescription can solve easily; it’s a fundamentally zero sum game that Tamil Nadu and India are involved in.

India by virtue of being a democracy tries to aggressively re-distribute wealth to places that are more populous and are poorer. India, if the recent political discourse in central and northern parts of the country is any indicator, also incentivises populist politicians from more populous and culturally dominant regions to impose that culture/language on others as a political project. Thus, a high performing state that has achieved low fertility rate and happens to be culturally distinct, such as Tamil Nadu, ends up getting ‘punished’ in such a system. The FFC formula and rekindling language issues are exactly that.

The FFC, for instance, has already bruised Tamil Nadu quite severely for achieving high economic growth and a low population growth. The FFC has increased the weightage for population in the formula with which the Centre distributes its tax revenue among states. Thus states that have a higher fertility rate get rewarded at the expense of wealthier states that also have low fertility rates. Tamil Nadu was the most affected state in terms of loss of revenue calculated using this formula. The loss in revenue was estimated at  close to Rs 6,000 crore for 2016-17.

The other significant area where the rest of India is in direct conflict with Tamil Nadu is delimitation. Under Article 82, the electoral map of India is/was to be redrawn after every Census. In 1976 it was amended to freeze Lok Sabha constituencies – so that states that implement family planning policies well weren’t punished for their success. It’s been frozen till 2024; but one can be sure that when it ends, states in north India will want to have greater representation in the Lok Sabha given their populations have exploded in the past 40 years compared to Tamil Nadu’s.

The average Tamil woman now bears 1.7 children while her counterpart in Madhya Pradesh bears 3.2. So either India has to agree with north India’s democratic request of making the representation in Lok Sabha true to demographic reality or punish states with low TFR for their success. Tamil Nadu has achieved the maximum increase in relative representation per citizen in the past 40 years and thus has the most to lose: it has gained seven MPs in relative terms. This likely loss of representation per citizen is also a loss of ability to influence future outcomes, which will end up pushing Tamil Nadu down a spiral of having ever decreasing influence in decisions that Delhi makes.

The argument that those wedded to the idea of a nation state being sacrosanct put forward is: this happens in most large countries with a federal system. They cite the example of how in the US,  New York and California subsidise many of the states in Appalachia or the Deep South. But the fundamental difference between California and Tamil Nadu is that California gains population from the states it’s subsidising and therefore those states aren’t gaining political representation at the expense of California. In India, birth rate is still the primary driver of population growth; not migration. Thus UP/MP/Bihar/Rajasthan, states that have fertility rates well above replacement, aren’t losing population to Tamil Nadu like parts of the US are to CA/NY.

States in north and central India are growing their populations at a rapid pace still while Tamil Nadu has had a below replacement fertility rate for over a generation. Further, the American system has two senators per state in their powerful senate. The Rajya Sabha doesn’t have the power of veto to the extent that the American senate has, either. So the argument of citing other federal systems doesn’t hold as much water.

Fifty years ago, Tamil Nadu was no different from the rest of India. As of 2016, its indices in health, education and other social development metrics are comparable to OECD nations; the median values for rest of India in all these parameters skew towards the global south. So, in some ways, being part of India has worked for the state. But moving up and staying at the top require entirely different strategies in sport and in business. Does that apply to constituent parts of a nation state? That’s the question a Tamil is grappling with. After all, two of the most successful countries in the world right now, Norway and Sweden, were formed by dissolving their union in 1905.