When the bench asked ECI to clarify its stand, its lawyer said the poll panel is supporting the cause to the extent of decriminalisation of politics. 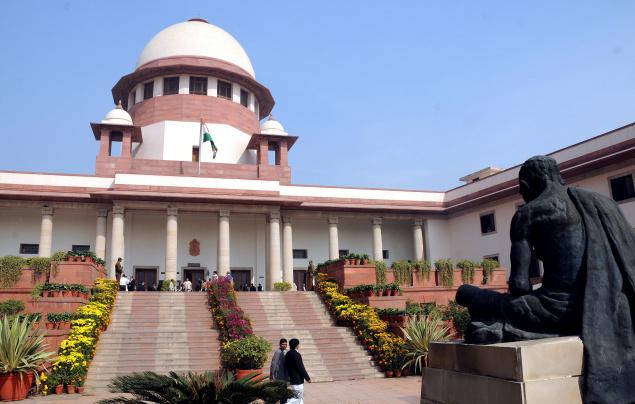 New Delhi: The Election Commission on Wednesday faced the flak of the Supreme Court for not taking a clear stand on a plea seeking barring of convicted politicians for life, as the top court made it clear that the poll panel cannot remain silent on the matter. A bench comprising Justices Ranjan Gogoi and Navin Sinha came down heavily on the poll panel and also asked whether it was “constrained” to give its views in the matter. “Is silence an option for you (ECI)? You must say either ‘yes’ or ‘no’ on whether you are supporting the petitioner. You are the ECI and here is a citizen of India who has come here to seek life-time debarment of convicted persons. Can you say I will be silent? No, you cannot,” the bench said.

“If you (ECI) feel constrained by the legislature, then let us know. If you are even constrained to the extent of giving your view, feel free and say so clearly,” it said.

Referring to the ECI’s reply, the apex court said it was clear that the poll panel has supported the cause espoused by petitioner Ashwini Kumar Upadhyay seeking a life ban for convicted politicians.

When the bench asked ECI to clarify its stand, its lawyer said the poll panel is supporting the cause to the extent of decriminalisation of politics.

The bench shot back, saying “Are you (ECI) supporting life-time debarment?”

The counsel submitted that one of the paragraphs of the ECI’s counter affidavit said the poll panel supports the cause and it should not be “read in isolation”.

“Paragraph eight of your counter-affidavit is very clear that you are supporting it. You are saying we have to read between the lines which we think we should not. We do not think why we should find out any other meaning of what is there in this paragraph,” the bench said and fixed the matter for further hearing on July 19.

It also asked the ECI about what it had communicated to the Centre on the issue.

When the ECI’s counsel said it has not said anything about it in the communication addressed to the Centre, the bench said “you cannot be silent”.

However, the counsel said the ECI was not the “correct authority to comment on it” and they would file an additional affidavit in the apex court on the matter.

“It is submitted that accompanying PIL, to the extent of relief claimed under prayers, are not adversarial and the answering respondent (Election Commission of India) supports the cause espoused by the petitioner,” the ECI had said in its affidavit filed in the court.

During the arguments, Upadhyay, himself a lawyer who argued on behalf of one of the intervenors, told the bench that ECI’s affidavit was clear that they were supporting the cause espoused by him.

When he claimed before the court that “30 per cent of the lawmakers are actually lawbreakers”, the bench said, “It is a matter of statistics and we are not going into it”.

The Centre, in its affidavit, said the prayer sought by the petitioner seeking life-time bar on convicted lawmakers was not maintainable and the plea should be dismissed.

The ECI affidavit said it was in favour of setting up special courts to decide the criminal cases related to people’s representatives, public servants and members of judiciary, in accordance with the spirit of the Constitution.

The affidavit was filed in response to a PIL which is also seeking setting up special courts for trial of criminal cases against people from the legislature, executive and judiciary.

The poll panel had said the issues raised by the petitioner were “not adversarial”.

It said it has been championing the cause of decriminalisation of politics within the constitutional and statutory framework, with the aid of Article 324 which relates to the functions and powers of the poll body.

It has also issued necessary instructions in furtherance of the mandate to conduct free and fair elections and to “decriminalise democracy”, the poll panel had said.

On March 3, the apex court had granted the “last opportunity” to the government and the ECI to spell out their stand on a plea for barring convicts from contesting polls for life and stopping them from entering the judiciary and the executive.

The petition has also sought a direction to the Centre and ECI to fix minimum educational qualification and a maximum age limit for persons contesting elections.