After receiving complaints from industry associations, the DoT has warned that unnecessary online blackouts cause economic damage and harm to the Digital India programme. 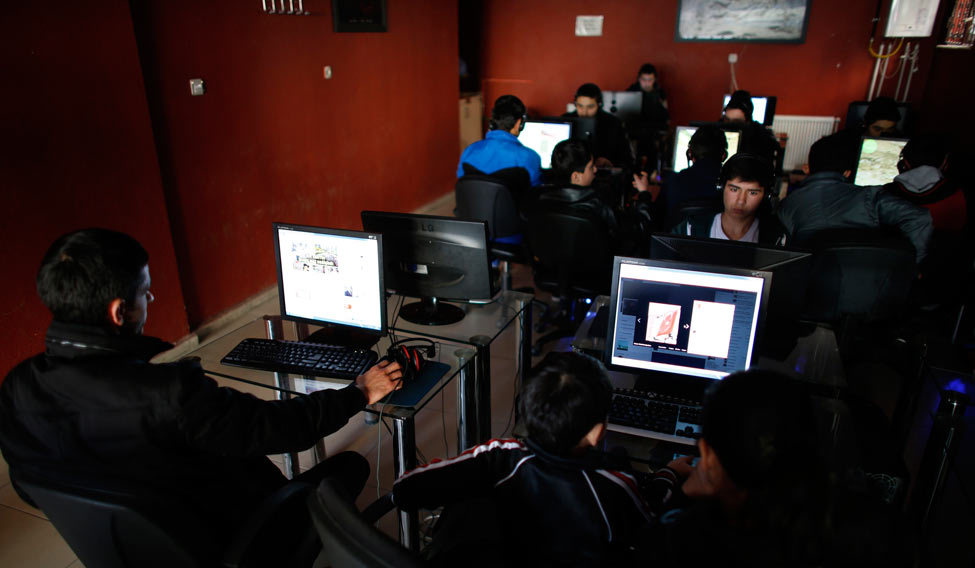 New Delhi: The Ministry of Communications and Information Technology has warned state governments across the country to not issue ‘internet shutdown’ orders for situations in which they aren’t warranted.

In a recent letter to states, the Department of Telecommunications (DoT) has noted that it has received complaints from industry associations that there have been shutdowns ordered even where has been no emergency or threat to public safety.

In India, state-ordered online blackouts can range from everything to suspension of mobile connectivity to stopping high-speed broadband services. Between 2012 and 2016, the Jammu and Kashmir region, one of the states most affected by unnecessary shutdowns, lost 18 days of mobile Internet access, according to an analysis by The Wire.

Research also shows they cause damage to India’s economy and are also considered by civil society groups as a violation of human rights.

Under current regulations, states are allowed to issue directions for “temporary suspension of telecom services” under two broad conditions that are laid out in the colonial-era Telegraph Act.

One, if it is done during a “public emergency”, or two if it is carried out in “interest of public safety”.

Despite clearly identified rules, there is growing evidence that some states are banning internet connectivity for problems that don’t satisfy either criteria. Earlier this year, for instance, the Rajasthan government suspended internet services across the state for two days in order to prevent cheating in the examinations held for recruiting local constables into the police force.

Also read: The Worst Aspect of India’s Internet Shutdowns Is the Official Secrecy About It

According to Right to Information replies obtained by the Internet Freedom Foundation (IFF), a New Delhi-based organisation that fights for digital rights, the Narendra Modi government is well aware of this problem.

In an advisory sent out by the Centre to multiple state governments in September 2018, the DoT acknowledges that many Internet shutdowns are being ordered even in situations where “public emergency or public safety” are not factors.

“It has come to the notice of the Department of Telecommunications that frequent suspension of Internet services are being ordered by State Governments in circumstances where Public Emergency or Public Safety are not impacted,” one letter, sent to the Jammu and Kashmir state government, says.

“I would like to apprise you that the Temporary Suspension Public Emergency or Public Safety) Rules, 2017, empowers the State Governments to issue the directions for temporary suspension of the telecom services only on the occurrence of public emergency or in the interest of public safety as per the provisions of Section 5(2) of Indian Telegraph Act, 1885.”

More importantly, the DoT also admits that internet shutdowns are not only causing damage to business activity – one estimate earlier this year said the Indian economy as a whole may have lost $3 billion between 2012 and 2017 because of such blackouts – but also hampering the government’s Digital India programme.

“As you are aware, the Government has embarked upon a program to deliver services to citizens through mobiles and Internet apart from promoting a cashless economy. In the absence of Internet connectivity, access to various citizen services is hampered,” the letter notes, adding a plea at the end to “sensitise officials/agencies” against actions that would lead to the unnecessary shutdown of internet services. 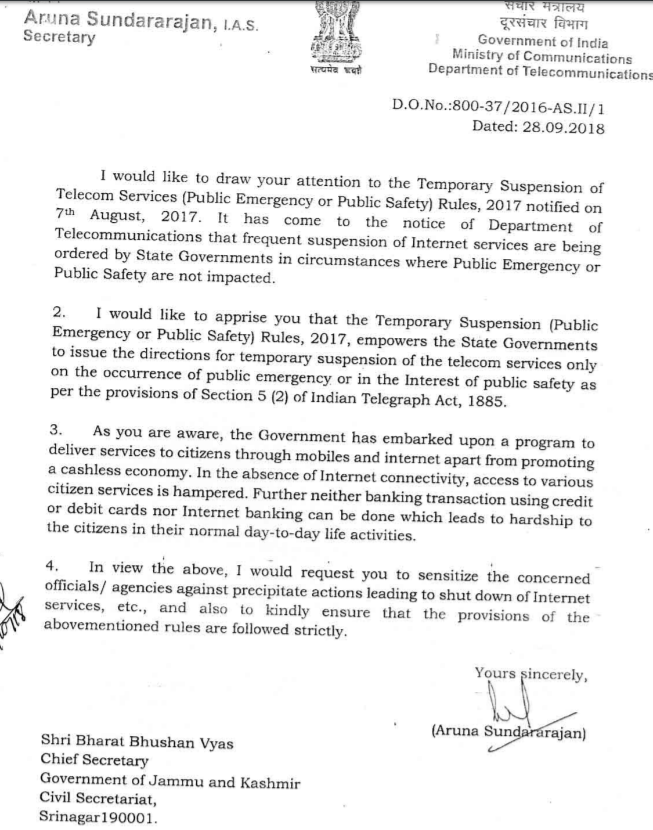 A copy of the DoT letter sent to Jammu and Kashmir government. Credit: Internet Freedom Foundation.

As the IFF has noted, before 2017, internet blackouts didn’t have a specific legal mechanism and instead were implemented Section 144 of the Code of Criminal Procedure, a method that opened the door for gross overreach.

However, with the formulation of the new telecom suspension rules in August 2017, the government may have expected a change.

However, on the ground, nothing is different. In fact, there’s some evidence the new law has possibly lead to an even greater number of blackout orders, as officials now incorrectly use both Section 144 and the Temporary Suspension of Telecom Services Rules, 2017 to restrict digital connectivity.

“This RTI is a part of our ongoing effort for reforms to the legal rules which permit orders for internet blackouts. The Department of Telecom’s letter is a positive step in the right direction but much more needs to be done. This includes a a centralised, transparent system of data gathering of internet suspensions and also requested for an open public consultation on the legal rules which as per us are not only unconstitutional but also operationally problematic,” said Apar Gupta, executive director, Internet Freedom Foundation.

The DoT’s letter seems to be in part sparked by concerns raised by the Apex Advisory Council for Telecom in India, an industry body made up of telecom operators like Bharti Airtel and Reliance Jio.

This prompted the DoT to investigate and fire off warning letters to different states.

In Rajasthan and other regions like Jammu and Kashmir, Gujarat and Uttar Pradesh, local governments pay little attention to the rules and procedures that accompany the suspension of telecom services.

For instance, the regulations dictate that every time an order is issued, a committee has to meet within five days and deem whether the shutdown was in accordance with Section 5 of the Telegraph Act.

However, an RTI filed earlier this year by the Software Freedom Law Centre, a New Delhi-based think-tank, found that the Rajasthan state government had set up only 11 review committees for 40 internet shutdowns that had been ordered between July 2017 and May 2018.