Hindutva groups plan to enter the mosque on June 4, though permission for any march or procession has been denied by the authorities. 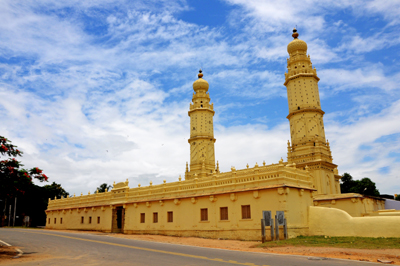 New Delhi: With Hindutva groups threatening to enter a mosque in Srirangapatna town of Karnataka’s Mandya district and perform puja there on June 4, the authorities have decided to impose Section 144 from the evening of June 3 until June 5.

According to The News Minute, Shwetha Ravindra, the tehsildar of Srirangapatna, has imposed prohibitory orders in the town that would prevent any procession, protest or yatra from taking place. Section 144 of the Code of Criminal Procedure (CrPC) prevents the gathering of four or more people, among other restrictions.

Hindutva groups have claimed that the Jamia masjid, located in the Srirangapatna fort, was built after a Hanuman temple was demolished. According to the Archaeological Survey of India, Persian inscriptions on the mosque say Tipu Sultan was the builder of this mosque, called Masjid-e-Ala, in 1782 AD.

According to reports, the ‘Srirangapatna Chalo’ march – called by Hindutva groups – has been denied permission. Yet, groups like the Vishva Hindu Parishad and the Bajrang Dal are adamant that they will proceed with their plan to enter the mosque and perform puja. Pramod Muthalik, who is the head of the notorious Sri Rama Sene, has also supported the ‘Srirangapatna Chalo’ call.

Some Hindu activists have submitted a memorandum asking the district administration to conduct a survey, similar to the one conducted at the Gyanvapi mosque in Varanasi, according to The News Minute.

The Places of Worship Act, 1991 mandates that a mosque, temple, church or any place of public worship in existence on August 15, 1947 will retain the same religious character that it had on that day and cannot be changed by the courts or the government.

The law says legal proceedings with respect to the conversion of the religious nature of any place of worship existing on August 15, 1947, pending before any court, shall abate but no fresh suit or legal proceedings shall be started.

The Supreme Court, handing the Ayodhya title case to the Hindu litigants, had upheld the validity of the 1991 law, saying:

“In preserving the character of places of public worship, Parliament has mandated in no uncertain terms that history and its wrongs shall not be used as instruments to oppress the present and the future.”

Therefore, constitutional experts suggest that even if evidence emerges that a place of worship was built after an existing one was demolished, its character cannot be changed from what it was on August 15, 1947.