Software Glitches Leave Many Mothers in the Lurch in Rajasthan

A replaced scheme is underway even as official data show 7,89,478 pending cases under Shubhlaxmi Yojana for monetary benefits for giving birth to a girl child. Mehazabeen even submitted an affidavit signed by her ward’s councillor that she gave birth to a girl, not a boy. Credit: Shruti Jain

Jaipur: The Bharatiya Janata Party government’s Digital India push seems to be running only skin-deep when it comes to delivery of public services. Take the case of Mehazabeen in Rajasthan who, despite possessing all the possible unique identification documents – Aadhaar, Bhamashah, birth certificate and bank account – required to seek monetary benefits from the state government’s Shubhlaxmi Yojana (SLY), hasn’t been able to prove that she gave birth to a baby girl at Zanana hospital in Jaipur on August 5, 2015.

This is what happened. While feeding Mehazabeen’s delivery data in OJAS, the online payment software of the Rajasthan government, the gender of her child was mistakenly entered as ‘boy’ by the hospital. When she complained of not receiving the money in 2017, the gender was changed but since the first instalment of the scheme was closed in 2016 itself, she couldn’t receive the aid.

“She repeatedly comes here with a lot of expectations but goes away disappointed each time. We tried to pay her the second instalment but since she didn’t receive the first, the second one couldn’t be processed in the software,” Ashok Dadriya, data operator at Zanana hospital told The Wire. 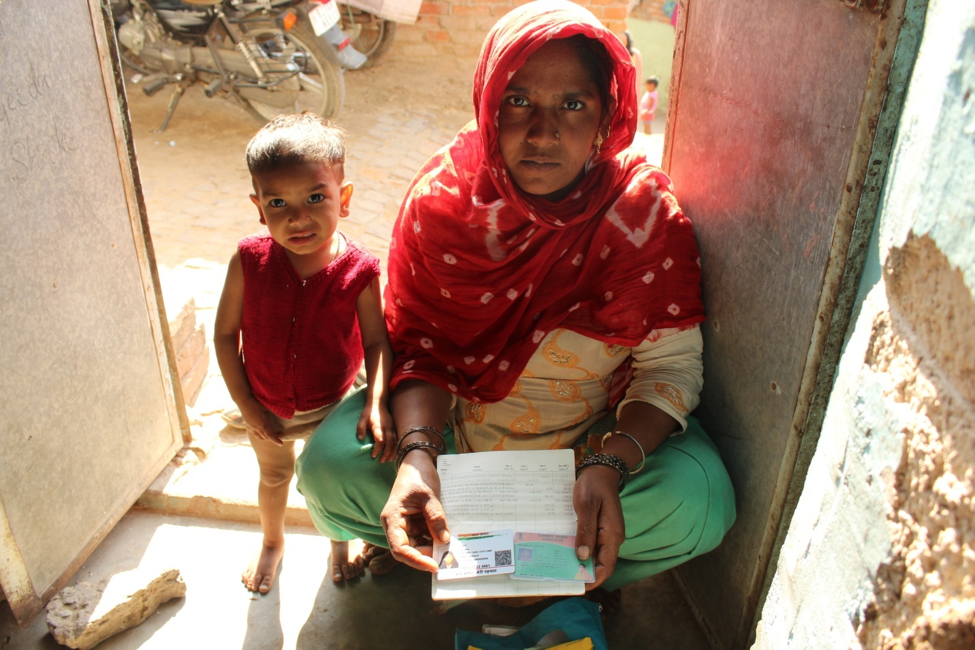 Farzana has a somewhat similar story. She received the first instalment of the SLY in 2015. However, when she went to get the second instalment, she was asked to produce a Bhamashah card ID.

“There was no problem in getting the first instalment in 2015, but when I went to the hospital a year later for the second one, I was told that no money will be given until I get the Bhamashah card,” Farzana told The Wire.

When she secured the Bhamashah a year later, she was told that the second instalment had already closed.

As per data of Rajasthan’s department of medical, health and family welfare, 15,54,374 beneficiaries were paid the first instalment (now closed) of the SLY till 2016-17 and 7,64,896 people have been given the second instalment, showing a gap of 7,89,478 within the official data.

With lakhs of cases still pending, the Rajasthan government has decided to do away with the second instalment of the SLY from February 1, 2018 – a scheme that was operational from April 2013 to April 2016 and gave financial assistance worth Rs 7,300 in three instalments to mothers on the birth of a girl child.

The first instalment is given at the time of birth only if the delivery takes place at a government or accredited private hospital. The second instalment is given when the girl turns one and is fully vaccinated, and third one when she turns five and is admitted in a school.

The department, however, blames the beneficiaries for not seeking the payment.

Speaking to The Wire, Tarun Choudhary, project director, maternal health, said, “The Shubhlaxmi scheme was started in 2013. If the people hadn’t come till 2018 to receive the payment, how long can we keep it? We’d put up the file for closure from April 2018, but the order is from February 1.”

Issues in the PCTS software

So, does the problem lie with software? Pregnancy, child tracking & health services management system (PCTS) is an online software used by the department of medical, health and family welfare in Rajasthan to track deliveries and immunisation at government institutions by means of a unique identification number called PCTS ID.

Apart from tracking antenatal care (ANC) check-ups and child immunisation, this ID is must for payment under the three schemes in Rajasthan – Janani Suraksha Yojana (on eligible institutional deliveries, a bank account holding mother is given a financial assistance of Rs 1,000 in urban areas and Rs 1,400 in rural), Shubhlaxmi Yojana and Mukhyamantri Rajshree Yojana (on eligible institutional deliveries of a baby girl, a Bhamashah card and bank account-holding mother is given Rs 50,000 in six instalments under multiple conditions).

Without Aadhaar, Bhamashah and a bank account, beneficiaries cannot seek the payment. However, many of those who have provided their documents are struggling with the frivolous grounds that the software lays to make them eligible beneficiaries.

For one, PCTS doesn’t accept delivery dates if the difference between the ANC registration date and the delivery date is less than five months.

“Usually, women shift to their maternal houses in other towns/villages toward the end of their delivery and get a new registration there. In such cases, the registration date and delivery date rarely show a difference of five months,” said Dadriya.

The registration date of an ID can’t be altered later as it gets blocked as soon as the Tetanus Toxid (TT) vaccination [given during pregnancy] details are fed in it.

“If the delivery date is missing from the PCTS ID of a woman, she cannot get the payment of any scheme meant to be given on the birth of a child,” said Yogesh, a data operator.

However, the department denies any connection between the ANC and delivery dates in the software.

“The software requires a gap of minimum 154 days between the last menstrual period (LMP) and the delivery date. There is no connection between ANC and delivery date,” said Choudhary.

The situation on the ground, however, differs. Pooja from Amber was registered during her eighth month of pregnancy (October 10, 2017) and delivered a boy on (November 1, 2017), but every time the hospital feeds her delivery date in the software, it shows an error ‘Delivery date cannot be less than ANC date.’

Error displayed by the software when the gap between ANC date and delivery date is less than five months. Credit: Shruti Jain

Since the PCTS ID for a particular woman remains the same, she is required to be re-registered in case of successive deliveries. However, the software requires the difference between the re-registration date of a pregnant woman and her current delivery date to be more than one day.

“Several women are re-registered by the institution where the woman delivers on the day of admission itself because of which the dates of re-registration and delivery are the same and, therefore. not accepted by the software,” data operator Dadriya said.

Error displayed by the software when the re-registered date and delivery date is same. Credit: Shruti Jain

For instance, Mamta from Bharatpur was admitted in Zanana hospital on April 4, 2016 and delivered a girl the same day. When the hospital re-registered her to fill in the delivery details for the online payment, the software didn’t accept the date and displayed an error, ‘the difference between registration date and last delivery date/abortion date should be greater than one day.’

“Our daughter is about two years old now but we haven’t received any money yet. We’ve travelled to Jaipur so many times to complain about it. Is there any scope now?” Mamta said.

The Zanana hospital has written several complaints to the chief medical and health officer about problems in processing payment to the beneficiaries but hasn’t received any response. A total of 32,042 cases whose payment is due are pending in Zanana alone.

Offiicals, however, deny this. “No such case is ever reported to us. This is not possible. I don’t understand who is giving you wrong information,” said Choudhary.

Software shows some payments successful even if they aren’t Some of the beneficiaries also claimed that there were several cases where the software showed successful transaction even when the payment had not reached their accounts.

For example, OJAS displays a successful payment of Rs 1,400 under Janani Suraksha Yojana (JSY) to one Monu Kanwar. However, she claims that no money has been transferred to her account.

“Her husband came to the hospital a week ago and showed us the bank passbook. Even the bank has confirmed that no payment has been received, but since the software shows it as ‘successful’, we can’t help him unless there are written orders,” Dadriya told The Wire.

In 2016, delivery details in 2,07,420 PCTS IDs were missing (not entered) as per data provided by the state department of medical, health and family welfare to The Wire.

One of the major reasons attributed to ‘missing delivery detail’ is duplication of IDs.

“Since, a ‘unique’ 16 digit PCTS ID can be created from a mobile number, most of the institutions where a pregnant woman goes for check-up make a new ID to fill details of ANC, without caring to search for an existing one,” said Yogesh.

“If Aadhaar, Bhamashah and bank account details are not mentioned in a woman’s PCTS ID then the software will not show any error if a new ID of the same woman is formed,” said Dharmendra Choudhary, District Nursing Officer in Jaipur. Even as payments were pending for lakhs of beneficiaries, on June 1, 2016, the Rajasthan government replaced Shubhlaxmi Yojana with Mukhyamantri Rajshree Yojana to give financial assistance of Rs. 50,000 on the birth of a girl. However, not much has changed on the ground when it comes to software. 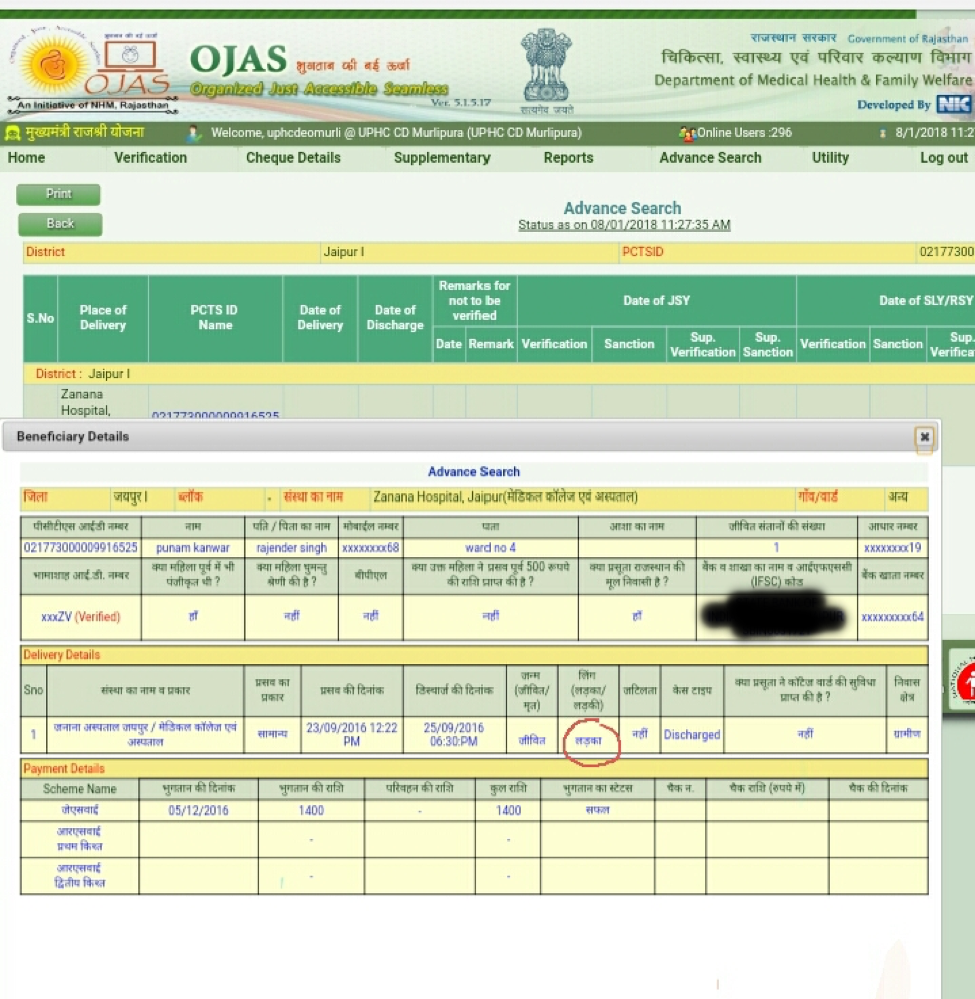 Poonam Kanwar’s daughter is now more than a year old but in the online software record she is still a boy.

“I’ve requested the hospital staff to make corrections in the child’s gender so that Poonam can avail the benefit of Rajshree Yojana, but no one listens. When people don’t get money, they blame ASHAs for not guiding them properly, not the online system,” Prem, an ASHA worker in Murlipura told The Wire.