No country that runs a government-driven system for technical and vocational education and training has been successful in doing so. 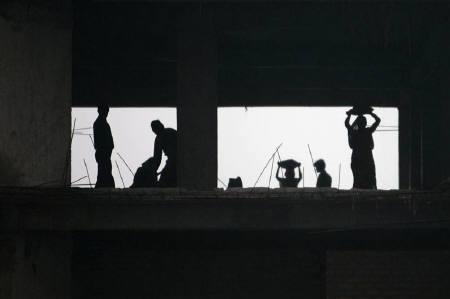 Construction workers are silhouetted as they work at a high rise building in Kolkata January 25, 2008. gathered in the... REUTERS/Parth Sanyal/Files

The 2017 Budget reinforced the idea that the government seems to believe that India’s skill development challenge can essentially be met by government efforts. Less than 5% of India’s workforce of 500 million has received any form of formal vocational training. Moreover, half of our workforce in 2010 was either illiterate or had primary/less than primary education. Hence, apart from education for all, skill development has also become a huge challenge.

Given these twin challenges, and given that we are now adding some five to seven million youth to the labour force annually – not 12 million as is commonly believed – who have higher levels of education than those currently in the labour force, it is critical that government’s own education efforts must ensure that all children are completing eight years of schooling and that actual learning in school is more. In addition, given that the governments – Union and state – have limited financial resources, the government should not be increasing financial allocation to education and skill development simultaneously. In fact, the Union Budget of 2017-18 is characterised by almost no efforts to increase allocation to education, which is deeply unfortunate.

However, the government has sharply increased allocation to skill development efforts. The Ministry of Skill Development and Entrepreneurship’s actual expenditure in 2016-17 stood at Rs 2,173 crore (revised estimates). This amount was increased in the 2017-18 Budget to Rs 3,016 crore.

The skill development programmes of other union ministries have also benefitted. The Budget proposed to increase the allocations for Deendayal Antyodaya Yojana-National Rural Livelihood Mission for the promotion of skill development and livelihood opportunities for people in rural areas to Rs 4,500 crore in 2017-18. Besides imparting new skills to the people in the rural areas, mason training will be provided to five lakh people by 2022, with an immediate target of training at least 20,000 people by the end of FY 2017-18.

Pradhan Mantri Kaushal Kendras have already been promoted in over 60 districts, the Budget now proposes to extend these kendras to more than 600 districts across the country. The government also aims to establish a 100 India International Skills Centres across the country. These Centres would offer advanced training and courses in foreign languages, which are supposed to “help those of our youth who seek job opportunities outside the country”.

In 2017-18, the Budget also proposes to launch the Skill Acquisition and Knowledge Awareness for Livelihood Promotion programme (SANKALP) at a cost of Rs 4,000 crores, which aims to provide market relevant training to 3.5 crore youth.

The next phase of ‘skill strengthening for industrial value enhancement’ will also be launched in 2017-18 at a cost of Rs 2,200 crores, a programme that will focus on improving the quality and market relevance of vocational training provided in the Industrial Training Institutes and strengthen the apprenticeship programmes through an industry cluster approach.

Clearly, the government’s own skills programmes will grow as a result. However, this ignores the overwhelming evidence from around the world that no country that runs a government-driven system for technical and vocational education and training (TVET) has been successful in doing so. Government-driven systems are supply-driven, without regard to skill demand. Government-driven systems also tend to be financed by governments, rather than those who will benefit most from the skill development – the employers and trainees. A recent World Bank study of the employment status of five government financed programmes states that only 27% of those who were a part of it received employment.

But government-driven systems are rarely able to respond to the fast-changing technologies commensurate with market demand. This is not to say that government financing is not needed. It is needed so that the needs of the unorganised sector for skill development are met, as are the needs of the less privileged sections of youth. For the unorganised sectors, its role should be to ensure recognition of prior learning for those in the workforce, who over the years have acquired vocational skills on the job, but have no certificate to prove it.

The government’s financing role and regulatory role should be limited to these tasks. If the government focuses on financing and providing skills to both the organised as well as the unorganised sectors along with performing a regulatory function, there will likely be a lack of efficiency, effectiveness and quality of training. However, the Union Budget is still reflective of a half-century old philosophy of manpower planning – and financing such planning – with little regard to whether any of these trained youth get employment.

Santosh Mehrotra is a professor of economics at Jawaharlal Nehru University and the editor of India’s Skills Challenge: Reforming Vocational Education and Training to Harness the Demographic Dividend, Oxford University Press, 2014.