The judgment remains unconvincing, both by the Supreme Court’s own standards of ensuring probity in public life and the requirements of institutional integrity. 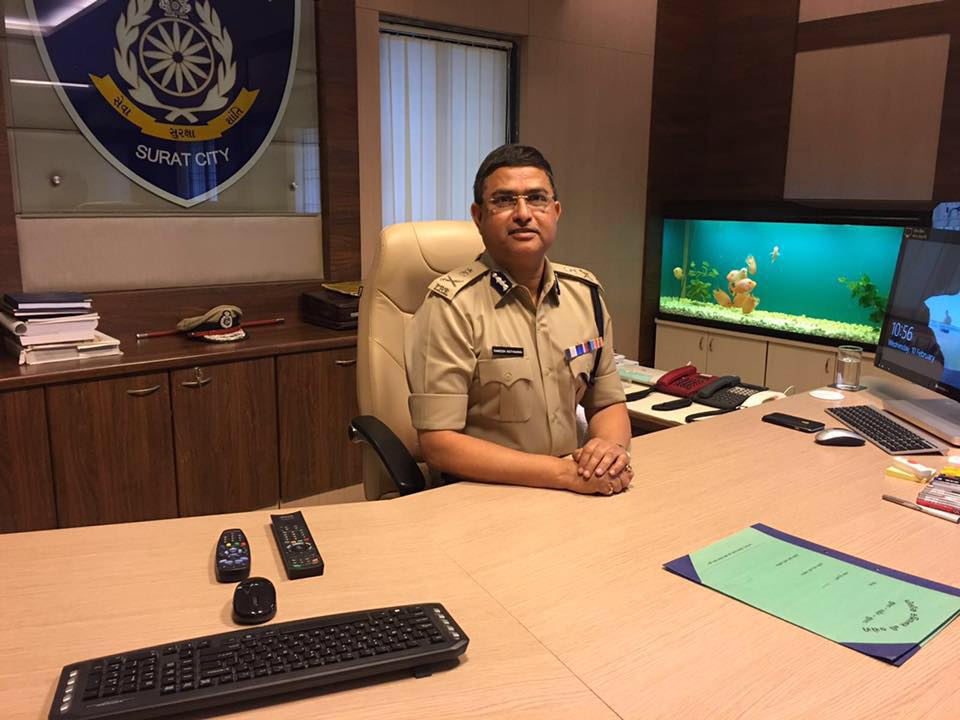 New Delhi: The Supreme Court’s judgment upholding the official selection committee’s choice of Rakesh Asthana as special director of the Central Bureau of Investigation hinges on a key assumption that appears particularly unconvincing.

The NGO, Common Cause, had gone to court challenging Asthana’s appointment on the grounds that his name had figured in a 2011 diary seized from Sterling Biotech – a company being probed by the CBI for money laundering – as the alleged recipient of payments worth Rs 3.8 crore. The diary in turn became the basis for the CBI to file an FIR in August 2017 against the firm’s promoters and “other unknown public servants and private persons.” Asthana was not named in the FIR but was presumably the subject of an ongoing investigation by his own agency.

During the course of hearings before the court, it emerged that the CBI director had also raised the same concerns with the selection committee, and had even submitted a secret note detailing links between Rakesh Asthana and Sterling and its subsidiaries.

Curiously, the CBI director’s note was disregarded by the selection committee mainly on the astonishing ground that the “entries … relate to one Rakesh Asthana … and there is no finding in these papers that the person mentioned therein is the same person under consideration for appointment.”

Drawing on the official minutes of the selection committee meeting of October 21, 2017, the Supreme Court bench of Justice R.K. Agrawal and Justice Abhay Manohar Sapre, has gone along with this idea that there may actually be two Rakesh Asthanas out there and that the one mentioned in the CBI director’s note may not be the same person whose appointment was being challenged. The judgment notes, in paragraph 16:

“(i) The Director, CBI had furnished a secret/confidential letter dated 21.10.2017 enclosing an unsigned note on M/s Sterling Biotech Ltd. and related entities and that the entries in the note referred, inter alia, to one Shri Rakesh Asthana.

(ii) The committee had considered the note and the matter was also discussed with the director, CBI.

(iii) The committee found that there are no findings in the papers that the person mentioned therein is the same person under consideration for appointment and there is nothing about the veracity of the contents of the document.” (emphasis added)

In paragraph 18 of its judgment, the bench held as follows:

“We cannot question the decision taken by the selection committee which is unanimous and before taking the decision, the director, CBI, had participated in the discussions and it is based on relevant materials and considerations. Further, even in the FIR filed by the CBI, the name of Shri Rakesh Asthana has not been mentioned at all. Thus, lodging of FIR will not come in the way of considering Shri Rakesh Asthana for the post of special director, after taking into consideration his service record and work and experience.”

It is clear from the above that the court, like the selection committee, had doubts over whether the Rakesh Asthana mentioned in the seized diaries was the same Rakesh Asthana being recommended for the job of CBI special director. The bench gave the benefit of doubt to Asthana the candidate, though it does not categorically assert that the two Asthanas are different.

What is surprising is that both the selection committee and the bench did not think it necessary to erase the doubt with facts before reaching a final decision. Instead, the committee as well as the bench simply brushed aside all objections on the ground that a doubt cannot be a hindrance to Asthana’s selection.

A question of fact, unlike that of law, can be easily answered by checking. If the selection committee had doubts about the identity of the Rakesh Asthana who is mentioned in the Sterling diaries, it could have asked the CBI itself to provide a categorical answer. After all, the CBI is probing the diaries, and the FIR has been registered by it.

If the Rakesh Asthana mentioned in the diary is different from the one considered by the selection committee, the CBI director would not have submitted the unsigned note, expressing his doubts, for the consideration of the committee. Assuming that the director submitted the note as an exercise in abundant caution, nothing prevented the selection committee from directly checking with Asthana himself; his denial, if any, could have been recorded in the minutes.

But the selection committee let the doubt linger on even after the appointment. And the benefit of doubt went to the appointee, as if the doubt was so complicated that it could not have been resolved promptly, before the committee concluded its deliberations. Assuming that the committee felt it would have meant some delay, it could have opted for a brief adjournment – to let the CBI director investigate this aspect of the matter and firmly establish the identity of the Asthana mentioned in the diary.

One can understand that the selection committee was not diligent enough to undertake this exercise before it recommended Asthana. But what about the Supreme court bench, when it was confronted with this doubt and treated it as if it did not matter? How could the bench assume that a doubt on facts – which is easily verifiable – will be cleared if the authorities concerned make no effort to verify it?

According to Prashant Bhushan, who represented Common Cause in court, it now emerges that the Central Vigilance Commission finally wrote to the CBI on November 9, 2017 – nearly three weeks after selecting Asthana – seeking a report on the “authorship” and provenance of the note that the CBI director had handed over to the selection committee on October 21, 2017. The CVC letter also asks “whether any verification has been carried out on the documents referred in the note by the CBI” and requests copies of those documents as well. 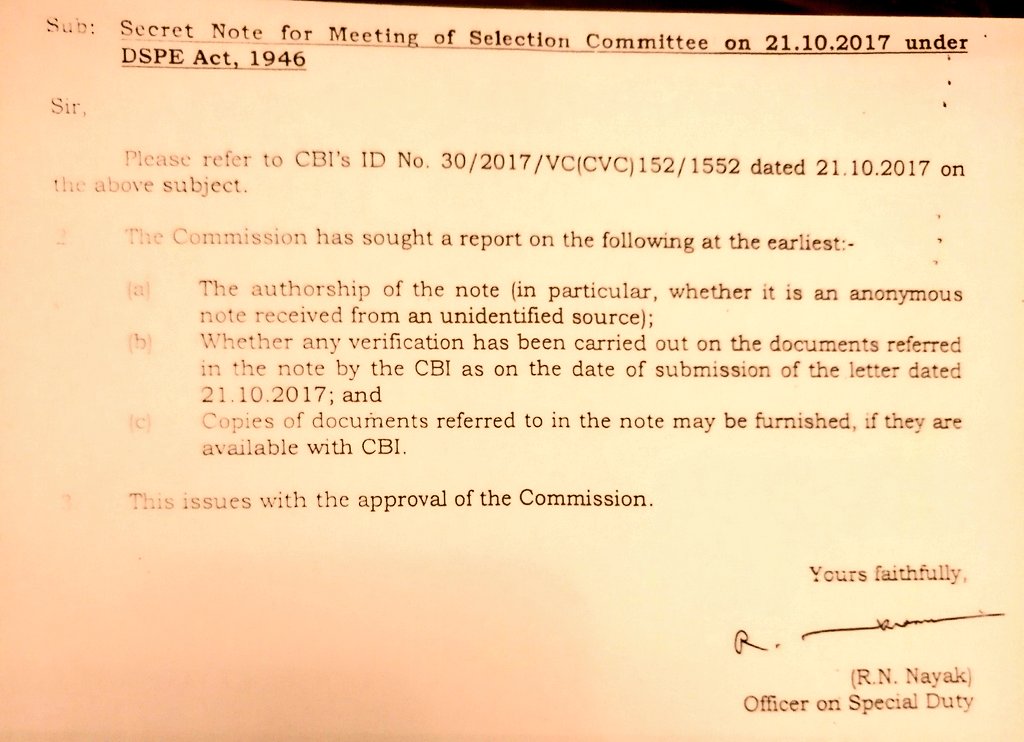 Letter sent by by the CVC to the CBI, November 9, 2017. Credit: Prashant Bhushan’s tweet.

What will the CVC do now if it emerges that the details in the note the CBI director handed over to the selection committee were indeed robust and “verified”? If chief vigilance commissioner Chowdary, under whose authority the apparent request for information has been sent to the CBI, is seeking these details now, this suggests he still harbours a doubt about the identity of the ‘Rakesh Asthana’ mentioned in the Sterling diaries. Why then did he push through the “unanimous” selection of Asthana on October 21?

Chowdary’s own appointment as chief vigilance commissioner, incidentally, has also been challenged in the Supreme Court, with Prashant Bhushan questioning his eligibility for the key watchdog position given his failure – as member, investigations, in the income tax department – to pursue to the finish information of alleged payoffs to politicians contained in the Birla-Sahara diaries .

Given the doubts, the Supreme Court could have at least asked the selection committee – comprising of the chief vigilance commissioner, the two vigilance commissioners, the Union home secretary and the secretary of the Department of Personnel and Training – to reconsider the matter after it receives a categorical finding by the CBI director as to the identity of the ‘Rakesh Asthana’ mentioned in the seized diary.

Tuesday’s judgment will, therefore, remain unconvincing, both by the Supreme Court’s own standards of ensuring probity in public life and the requirements of institutional integrity.