Guwahati: In an unprecedented development, Assam’s Information Commission has concluded that a former chief secretary and other officials hid files about the involvement of two IPS officers in a chit fund scam. The scam siphoned hundreds of crores from poor investors.

The Saradha Chit Fund Scam grabbed the attention of media in Assam because of the involvement of government officials and allegations that a powerful lobby was shielding IPS officers from being interrogated on their involvement in the scam.

Besides the enquiry by the state Directorate of Vigilance and Anti-Corruption, the CBI and the Enforcement Directorate also launched their own investigations to nab the kingpins and recover investments.

The commission’s order came after a chain of events starting more than two years ago, when activist Dulal Bora filed an RTI application before the office of the chief secretary, V.K. Pipersenia, seeking a report by the Directorate of Vigilance and Anti-Corruption on the involvement of two senior IPS officers. 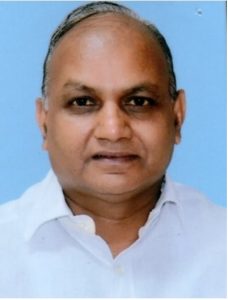 Pipersenia had recently been appointed the chairman of three public-sector undertakings on power generation and distribution for a period of two years. Last year, his tenure was extended by the BJP-led state government, against the protest of the opposition.

The RTI application was transferred from the chief secretary’s office to the home department, which lost no time in asking the political department (in the same ministry) for a reply to the petitioner. More than nine months passed before the additional secretary of the political department replied, saying that the file was unavailable since it had been forwarded to a “superior authority”. He didn’t identify who it referred to.

Failing to receive a reply, Bora then filed a complaint at the Information Commission, which directed the chief secretary’s office and the political department to reply to the RTI request. The chief secretary’s office replied that the order had been “misplaced”. The commission then observed that the political department did not make any effort to retrieve the file from the “superior authority.”

It is not known if the political department, which is under chief minister Sarbananda Sonowal, has arrived at a decision on the suggestion of the chief secretary. The commission’s order, however, noted that the enquiry by the Vigilance Directorate has been kept in “abeyance” by the previous Congress government through an official communiqué on February 20, 2016.

The reply from the chief secretary’s office to the commission that the file was found after the chamber was cleaned, coupled with the reluctance of the political department to arrive at a decision on the case, has raised eyebrows among bureaucrats in Guwahati.

The home and political department had refused to provide information on the case when this correspondent had filed an RTI application last year.

One of the two IPS officers named in the report has since retired. The other is an additional director general of police, who was back in the news last year after a woman sub-inspector accused him of demanding money from her.

“It was not at all intentional”

Former chief secretary Pipersenia told The Wire that the file got misplaced in his secretariat chamber. “That’s all. It was not as if any enquiry was stopped or anything of that sort. These thin files got mixed up with some papers. It was not intentional which I have recorded in the file. However, if you see, no damage has been caused to anybody. I did not stall the enquiry,” he said.

He explained that he had carried out the orders of former chief minister Tarun Gogoi, who wanted the complaint to be closed. He added that he returned the file to the home and political department soon after it was retrieved which happened on the last day ahead of his retirement on February 28, 2018. 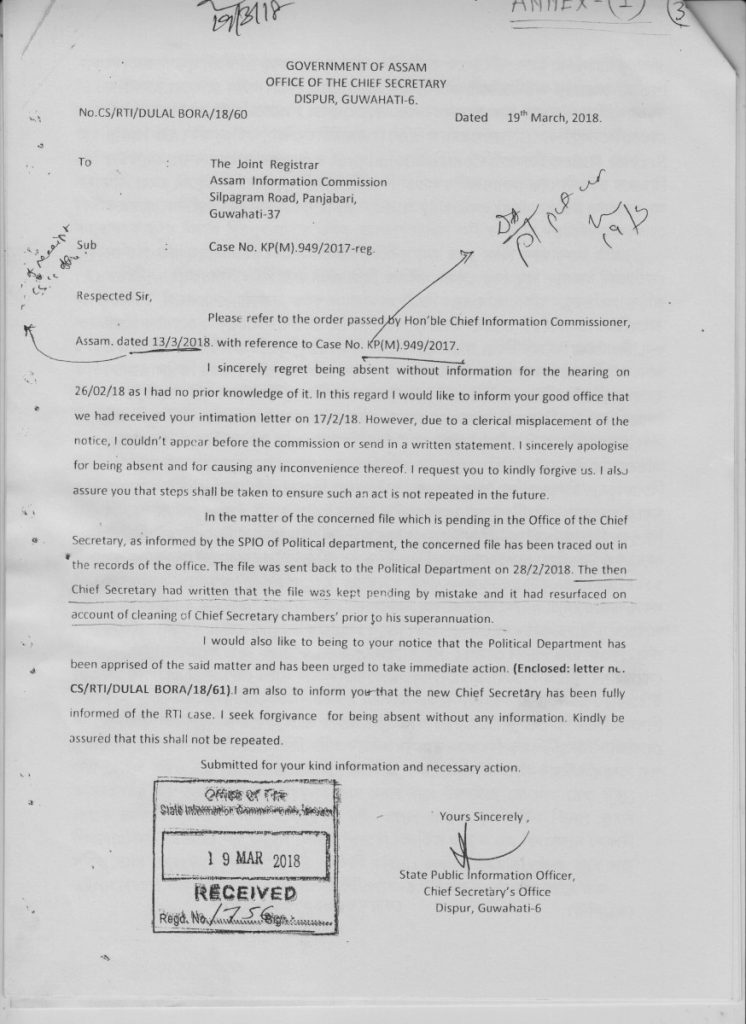 Reply from the chief secretary’s office to Assam Inforamtion Commission.

The Assam Information Commission was in no doubt that deliberate attempts were being made to hold back the file and avoid disclosing information on the RTI application. It does not believe that either Pipersenia or officials of the home and political department were “unaware” of a file having “substantial public importance.”

“The chain of misplacement, disappearance and manipulation/ tampering of records and obfuscation of the actual position in the matter by both the parties… appear to be not only a subversion of the implementation of the RTI Act 2005 but also an obstruction to the lawful discharge of public duty by the Commission,” said the eight-page order.

The bluff was called when the official submitted a reply to the commission two months later where the receipt date was mentioned as “13 Mar”. To cap it all, as the commission’s order pointed out, the letters “MAR were written by hand” on the seal of the chief secretary’s office.

The commission’s order, among other recommendations, also directed the incumbent chief secretary Alok Kumar to begin a probe into the non-availability of the file for almost two years.

Rajeev Bhattacharyya is a Guwahati-based senior journalist and author of Rendezvous With Rebels: Journey to Meet India’s Most Wanted Men and Lens and the Guerrilla: Insurgency in India’s Northeast.