"The delimitation exercise is the manifestation of the RSS’s sectarian design. We as Kashmiris feel that everything around us is being snatched from us." 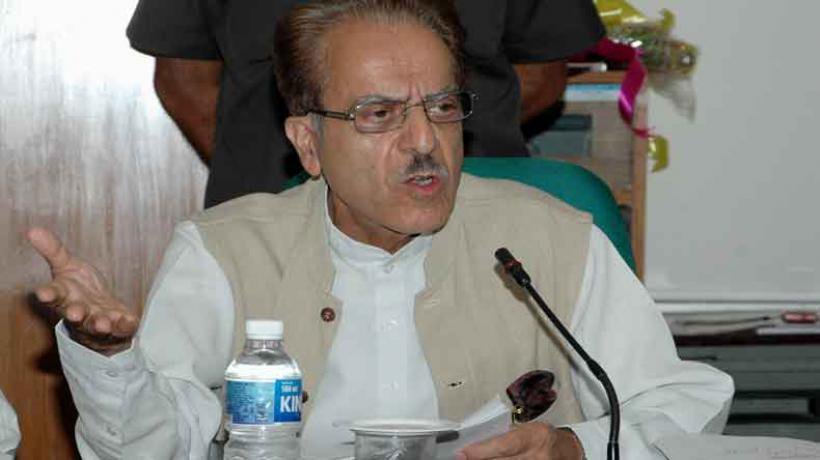 New Delhi: In its recent meeting on December 20, the Delimitation Commission proposed six additional assembly seats for Jammu and one for Kashmir. In its bid to redraw the electoral map of J&K, the commission met with the associate members – three MPs from the National Conference and two from the Bharatiya Janata Party. The recommendations of these associate members are, however, not binding on the commission.

On December 21, former Union minister and Congress leader Saifuddin Soz spoke to The Wire about the legislative changes in the political and demographic character of Kashmir in view of the recent Delimitation Commission proposal and the regulations and orders that have been protested by Kashmiris since August 5, 2019.

The interview has been edited lightly for style and clarity.

What transition has the BJP made in its approach towards Kashmir?

The BJP has invested large amounts of money to buy off political affiliates and workers in Kashmir, to establish puppets and purchase turncoats whom it can bank on. In Sumbal, Karnah, Keran, Tulail, Gurez and Kupwara’s interiors, BJP has tried its best to purchase locals into joining its party. Just like we saw many sudden inductions by the BJP before DDC elections. These local Kashmiris who joined the BJP as vote cutters, were purchased only to establish their ground in the Valley.

Everyone, including the NC, PDP, People’s Conference is aware of this design – when the BJP-RSS combination fails to muster electoral victory, they use their money to poach panchayat heads and party workers. And reading down [Article] 370 was their first step towards their goal of installing a Hindu chief minister in Jammu and Kashmir, which they now want to achieve electorally through delimitation.

Also read: Why J&K’s Proposed Delimitation Is Being Viewed as Unfair to Kashmir

Nobody is saying Kashmir is against Hindus or a Hindu chief minister; if people elect an impeccable candidate, it’s the people’s mandate, but achieving a Hindu chief minister by engineering a religious majority in the garb of delimitation will never be accepted by the people of Jammu and Kashmir. They are under the assumption that during Mufti Mohammed Sayeed’s time, just because they were in alliance they gained ground in Kashmir. It is BJP’s foolish assumption.

On the basis of population, Kashmir deserves more seats, however the delimitation commission has proposed more seats for Jammu as per geography. What do you make of this?

In delimitation, one can make out how strategical the increase in seats is. The majority of seats have been increased in Hindu-majority areas. This shows how the BJP’s efforts are by all intents and purposes aimed at establishing ground for the communal ideology they espouse and are working towards a Hindu chief minister for J&K. What else could bring Devender Rana to the BJP from NC? He must’ve been shown the same dream.

Once General Sundarji said, ‘These blind men of Hindustan.’ I use the same phrase for the BJP and RSS, they are blind men and don’t know the interests of a vibrant democracy like India. Throughout its history, India has accommodated several dissenting and different political voices to coexist. These communal forces are just in the political game for their petty gains, with Modi and Amit Shah as the face of it all, they are dividing the country. The communal parlance of the BJP should not be the language of India, they can never benefit the country. I really respect [M.K.] Stalin and Mamata Banerjee for the kind of democratic politics they are undertaking to counter such communal forces in their states. Today it is the government itself which harming India’s democracy.

The BJP has undertaken a number of actions in Kashmir, from UT-isation to the domicile law to now delimitation. Do you see them trying to Hinduise Kashmir?

How much pain can one bear? Betrayal after betrayal, Kashmir will fight back, hartals happen here, people are disappointed, they are deeply angered. Let me tell you, Kashmir hasn’t aged a day after August 5, 2019. We have not and we will never accept the unconstitutional reading down of Article 370. They sidelined the Kashmiri political mainstream and made us look like fools in front of our own people. The accession also only came into being after it was recognised by the JK constituent assembly on the foundation of Article 370.

And this constant narrative of normalisation? What is this? Rubbing salt on our wounds, our loss every day? Nothing is normal in Kashmir and these hartals are an expression of the same. Using the delimitation commission as well, they’re trying to render the Kashmiri Muslims irrelevant. This is how they’re using institutions to disempower us more than the previous times. The delimitation commission is visibly on the right side of the BJP government since its decision to unbalance electoral equity and make it Jammu versus Kashmir is evident in its first proposal itself. This is a robbery of our rights as Kashmiris.

Post the August 5 move, there is a perception that the BJP disenfranchising Kashmiri Muslims. Do you agree with that?

In Jammu and Kashmir, the overwhelming majority is miffed with the revocation of 370. Log naraz hain, we will never accept the revocation. We will fight and we will win back 370 democratically. Article 370 is not a favour to us, it is our right, it was a precondition to the recognition of J&K’s accession to India.

You think one morning you will wake up and erode our rights and you will face no resistance no backlash? Not one Kashmiri is going to accept the revocation, not now, not ever. Maharaja Hari Singh ceded power to the dominion of India only regarding defence, external affairs and communications. Article 370 was the translation of Jammu and Kashmir’s accession to India, the revocation of which will harm all our people equally. Since then, they are using all tactics to scare us, jail us and prevent resistance from taking shape, but I trust the courts, I trust democracy, we will win back 370.

Mainstream leaders since August 5, 2019 have expressed apprehensions that various step since then have been aimed at changing the demographic structure of the region. How do you feel about this?

The delimitation exercise is the manifestation of the RSS’s sectarian design. We as Kashmiris feel that everything around us is being snatched from us. When talks of our non-agricultural land being given to outsiders and their industries was in light, the anger was swelling in Kashmir. Our land is ours. We don’t want outsiders setting up industries here, our children should be helped in setting up industries. Here, people don’t even want to sell it to outsiders. We will never give our land to outsiders.

Even their move to rid us of our assembly was in the same light. We have been made to live at the mercy of the law they create. We want our own elected assembly to decide our future. People of Kashmir will never want to give up their rights. The state of Jammu and Kashmir belongs to the people of Jammu and Kashmir, irrespective of religious beliefs. We shall not allow outside investment. No one could convince Maharaja Hari Singh to give up guarantees and rights of the Kashmiri people, why should we give up our rights then.

By allotting more seats to Hindu-majority Jammu, is the BJP sending a political message to Hindutva forces across India about their alleged feat in Kashmir?

The delimitation exercise is the manifestation of RSS’s sectarian design and a clear display of how they look at every society with a communal lens. People of Kashmir will never want to give up their rights. RSS or its affiliates can never build India. It is deeply discriminatory and sectarian.

Sardar Patel, whom the BJP holds so dear, once decided to ban the RSS and root out forces of hate and violence. I am saying this for the right wing to hear it and understand it, that we value democracy, Kashmiris are not communal like them. As a society we equally respect all religions and are bound by the concept of Kashmiriyat, their ideas will never grow here. The entire process of delimitation and BJP’s trajectory in J&K is a conspiracy hatched by the RSS to change the demography of the state and ultimately install a Hindu chief minister in J&K.