Saharanpur: Eight Men Assaulted by UP Cops in Viral Video Cleared of All Charges

The police said they are still verifying the authenticity of video and there has been no statement from the National Human Rights Commission on the incident. 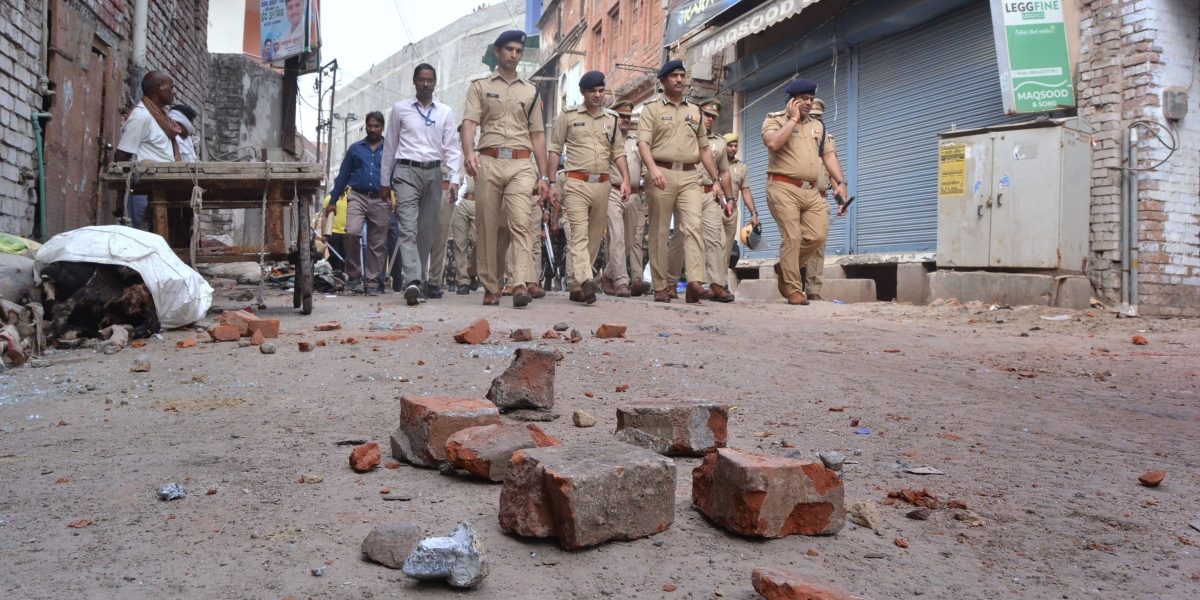 Police conduct flag march in a Kanpur locality, a day after clashes broke out in Kanpur, June 4, 2022. Photo: PTI/File

New Delhi: The eight Muslim men who were seen on video being brutally assaulted by uniformed police while in custody after protests broke out in Uttar Pradesh’s Saharanpur last month have been cleared of all charges.

The protests against the controversial remarks on Prophet Muhammad by now-suspended BJP spokesperson Nupur Sharma and expelled party leader Naveen Jindal took a violent turn and led to more than 80 FIRs (first information reports) in connection with the case.

The release orders from a magistrate court came nearly a month after the arrests were made. The orders were issued in accordance with Section 169 of the Code of Criminal Procedure which pertains to the lack of evidence. The men walked out of jail on July 3, Sunday.

As per the NDTV report, their release means their names will no longer figure in the FIR which was filed against 85 persons over the protests against the BJP leaders’ remarks on the Prophet.

Among the arrested men, now discharged, is Mohammed Ali, who had his arm fractured in the assault, the report said.

Mohammad Arif, whose brother, Mohammad Asif, has also been arrested, confirmed that his brother had returned home.

Speaking to The Wire, he said, “This was all about crushing the poor. We got into debt trying to free my brother. How will a family survive? What will they eat when their breadwinner is jailed and the other one is spending every penny on freeing him?”

Advocate Salim Khan, a member of a team of lawyers representing the accused pro-bono confirmed the order to The Wire and shared the list of those who have been released. He stated that it had been over 20 days since those who were innocent were incarcerated.

After the arrests, show cause notices were issued to the families of several accused of the violence. Asif’s family was also sent one such show-cause notice.

On June 12, a viral video showed two policemen hitting the men with lathis in what appeared to be a police station. The victims were seen begging and trying to block the blows.

BJP MLA Shalabh Mani Tripathi – who is a former journalist and used to be the media advisor to chief minister Yogi Adityanath – shared the video on Twitter with the caption ‘return gift for rioters’.

The video and the tweet appear to have been deleted.

However, Aam Aadmi Party MLA Somnath Bharti had shared a screenshot of that tweet.

.@Uppolice this is the tweet of BJP MLA .@shalabhmani which after I quoted has been deleted. Though the tweet he has deleted but the mentality which he possesses is to be tackled legally. Before he deleted the tweet had gone viral and retweeted and liked by thousands. https://t.co/QeTgvJwlpT pic.twitter.com/I5yvo1MPgI

The news outlet reported that the police questioned the authenticity of the video and ordered an inquiry into it. “That inquiry is still underway,” superintendent of police (city) Rajesh Kumar told NDTV.

The UP authorities also razed some of the protesters’ houses, accusing them of “masterminding” the violence.

The National Human Rights Commission – a constitutional body mandated to investigate human rights abuses by the authorities, especially custodial torture – has yet to comment on the incident, which sent shockwaves throughout India. A complaint was filed with the NHRC but its status is not known.