Will India Roll Out Ingenious Measures to Bypass Sanctions Imposed on Russia?

Over 60% of material employed by India’s armed forces is of Russian/Soviet origin, all of which need continual maintenance backup by its original equipment manufacturers. Without this, all of it may come to a grinding halt.

New Delhi: With the US-led sanctions on Russia, India is compelled to invoke a raft of sanctions-busting measures to continue its reliance on Russian support in the defence sector. If not invoked, these sanctions would jeopardise India’s military operability by blocking access to critical platforms and components for in-service equipment.

Over 60% of material employed by India’s armed forces is of Russian/Soviet origin, all of which need continual maintenance backup by its original equipment manufacturers (OEMs). Without this, a large proportion of it would, before long, grind to a halt. At least 113 Russian armament OEMs, including all their design bureaus and related entities at home and in nearby countries like Belize, Estonia, Kazakhstan, Latvia and Slovakia, stand sanctioned for an unknown period. A handful of Russia-related defence entities in Singapore, Spain and the UK too faced embargoes.

Consequently, India’s three services had recently conducted detailed audits of their Russian equipment to evaluate the glitches these sanctions would eventually engender. But senior officers, who declined to be named, said no “clear road map” had emerged.

“The all-embracing conviction in all three services is that the sanctions-generated crisis would blow over soon and things thereafter would return to normal,” said a one-star Indian Navy (IN) officer insisting on anonymity. The collective outlook, he added, in all service headquarters was that the “self-correcting” mechanism in such matters would ultimately prevail and all would be well.

But some service officers disagreed.

Brigadier Rahul Bhonsle (retired) of the Security Risks consultancy Group in New Delhi said the challenge posed by the punitive sanctions was of “crisis proportions” and that some jugaad or innovative bypass was urgently needed to mitigate the choking off of backup support for the bulk of Russian equipment operated by India’s armed forces.

Bhonsle added that though all three services could operationally survive the embargoes for the next six to eight months through existing inventories, the government would need to swiftly undertake contingency planning to obviate warranted future hitches.

In the interim, he suggested that India encompass military commerce with Russia via an Inter-Governmental Agreement to exploit the bilateral rupee-rouble route which had prevailed for decades between the two sides under the Soviet Union, till its disintegration in 1991.

Previously, this course comprised a barter arrangement through which India supplied Moscow tea, sugar, toothpaste, footwear, socks and other consumables then in short supply in the Soviet Union. In exchange, India received combat and transport aircraft, helicopters, tanks, submarines and warships, amongst other diverse military hardware and ordnance.

According to Bhonsle, this “feasible” possibility entailed India making payments for Russian defence equipment in rupees, using banks with no exposure whatsoever to either the US, European or other global financial platforms. 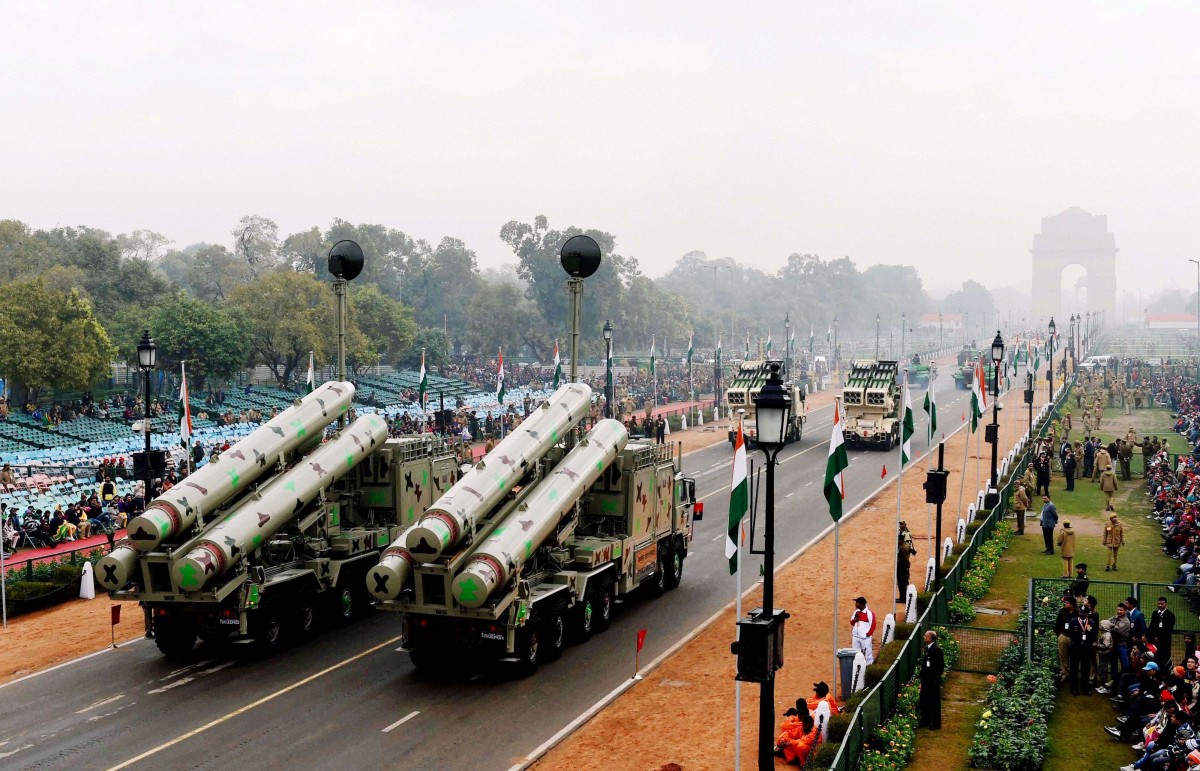 This sanction-busting channel was similar to the practice India had exercised to buy oil from Iran from 2012 onwards after it was sanctioned by the US for pursuing a rogue nuclear weapons programme. These sanctions, which endure, were reinforced by Washington in late 2018 and expanded over the next two years to include Tehran’s entire financial sector. However, under pressure from the US India had stopped buying Iranian oil in May 2019.

But till then, India’s efficacious jugaad led to it depositing, in rupees, the value of the oil it had purchased from Tehran into multiple escrow accounts in the state-owned UCO Bank, to reduce the risk of several Iranian accounts in the bank being subjected to secondary US sanctions, and thereby frozen.

Iran, for its part, agreed to expend this money to import food and assorted essential goods like pharmaceuticals, medical, industrial and engineering equipment all of which were in short supply, due to sanctions. It also used its rupee cache to defer all costs, including rentals, salaries and other administrative expenses incurred by its missions across India.

Bhonsle further added that an alternate sanctions-by-passing possibility was utilising Russia’s Sistema Peredachi Finansovykh Soobscheniy (SPFS) or System for Transfer of Financial Message, which has over 400 domestic financial institutions, mostly banks, as part of its network.

According to Bhonsle, one of these SPFS-associated Russian banks could, hypothetically open a rupee/rouble ‘vostro’ account, conceivably with UCO Bank, which, in turn, would become its agent in India, providing it corresponding financial services as an intermediary. These services in consonance with all ‘vostro’ accounts, would include deposits, withdrawals and, more importantly, money wire transfers of rouble equivalent amounts to the Russia-based SPFS bank.

Russia’s SPFS emerged in 2014 as Moscow’s homegrown, albeit smaller equivalent of SWIFT or Society for Worldwide Interbank Financial Telecommunication money transfer gateway which Russia can no longer avail of following sanctions. Earlier, SWIFT had provided Moscow a secure single-channel inter-bank and corporate-to-bank connectivity linking some 11,000 banks and related organisations in over 200 countries, but no longer.

Alongside, Brigadier Bhonsle argued that India’s domestic Central Bank Digital Currency (CBDC), which is an electronic record or digital token issued by the Reserve Bank, could be pressed into service as a way of circumventing sanctions and making payments to Russia for urgently-needed military goods.

He cited yet another avenue, but one which involved China’s Cross-Border Interbank Payment System (CIPS), which counted several foreign banks as shareholders and offered clearing and settlement services for its participants in Renminbi payments. In all likelihood, this route would definitely be proscribed for India, considering its 23-month long continuing faceoff with the People’s Liberation Army along their mutually disputed frontier in Eastern Ladakh.

And, if all of the above failed to materialise, or were eventually foiled by sanctions, the former Indian Army (IA) officer recommended that India try and “persuade” trusted ally Russia to agree to deferred payments for supplying its defence kit. Such a mutually beneficial approach, though tenuous given the uncertainty over the duration of the sanctions, implied Russia extending a “soft loan” to Delhi that could eventually be re-paid once the embargoes were lifted.

Meanwhile, of the three Indian services, the Indian Navy (IN) and the Indian Air Force (IAF) remained unduly dependent on Moscow, not only for new platforms and equipment but also to ensure a steady supply of spares and sub-assemblies to keep the bulk of their active equipment serviceable.

A majority of the IN’s assets, including its sole aircraft carrier and its embarked fighter complement, frigates, destroyers, missile boats, diverse helicopters and over 80% of its armaments, missiles and guns had been supplied by Russia.

The sanctions also threatened the installation of the Aviation Facility Complex or AFC on INS Vikrant, the navy’s locally designed 40,000-tonne carrier and the crown jewel of Indian naval shipbuilding which was scheduled for commissioning on India’s 75th independence day anniversary in August.

The AFC, which had been partially installed, following repeated delays, is being supplied by Russia’s Nevskoye Design Bureau, which has also been sanctioned. Additionally, the construction of the IN’s four Admiral Grigorovich Project 1135.6M frigates and the leasing of a nuclear-powered submarine too are endangered.

Furthermore, a majority of the Navy’s platforms were powered by gas turbines supplied by Ukraine’s Zorya-Mashproekt research and production complex located at Mykolaiv, 65km from the Black Sea, which too is presently under fierce attack by the advancing Russian army. Hence, Ukraine’s ability to either provide power packs for the under-construction stealth frigates or spares for the inordinately large numbers already in service remains highly uncertain.

The IAF, for its part, operates some 410-odd combat aircraft types, 140 or so transports and mid-air-refuelers and over 230 rotary-wing platforms from Russia, all of which for previous years had endured low serviceability, due to a spares shortage and indifferent after sales support from their OEMs.

Senior IAF officers warned that it would only get worse under sanctions. Moreover, Ukraine supplied the IAF critical R-27 air-to-air missiles for its multi-role Sukhoi Su-30MKI fighters and was also involved in upgrading its fleet of some 60-odd twin-engine An-32 Cline transporters, all of which were now imperilled.

The IAF was also awaiting delivery of its second of five Almaz-Antey S-400 Triumf self-propelled surface-to-air missile systems it had acquired in 2018. It had received one such system late last year, while another, a training regiment, was scheduled for imminent arrival having been partially paid for before Russia was sanctioned.

Military sources said that technically Moscow could deliver this missile system to the IAF, like earlier aboard an Ilyushin Il-76 and via sea, as none of the countries en route had issued Notice to Air Missions or NOTAM’s disallowing use of their airspace to Russian aircraft or to its sea-borne platforms, in consonance with sanctions.

Alternately, India too could dispatch one of its transport aircraft – or a cargo ship – or both, to Russia to take delivery of the S-400 system and ferry it back. But diplomats and security officials in Delhi warned that resorting to either of these possibilities would certainly invite “severe opprobrium” upon India, which was recently upbraided by US President Joe Biden for displaying “shakiness” in opposing Russia’s invasion of Ukraine.

Conversely, the IA’s dependence on Russia was limited to spares for its 3,000-odd T-72M and T-90S main battle tank variants, around 2,000-odd infantry combat vehicles and an assortment of specialised ammunition and missiles systems. However, it too awaited advance delivery of some 20,000 Ak-203 Kalashnikov assault rifles which were part of a contract the two sides had signed last December to indigenously licence-build some 601,427 of these rifles, the status of which now remains nebulous.

Accordingly, short-term sanction-busting options will remain just that: little more than temporary jugaad or makeshift processes for a gargantuan conundrum, which so far has confounded resolution for India’s military.