Rs 119.70 crore was owed to Air India by the Prime Minister’s Office for the use of chartered flights by Prime Minister Narendra Modi. 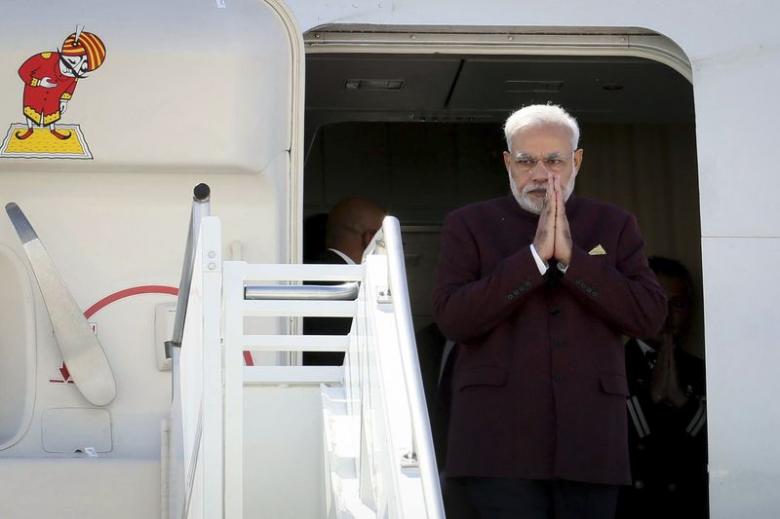 Prime Minster Narendra Modi walks out of the airplane as he arrives at JFK airport in New York September 26, 2014, a day before his appearance at the United Nations General Assembly. REUTERS/Mohammed Jaffer-SnapsIndia

New Delhi: After much delay, a bill of Rs 119.70 crore raised by Air India for eight chartered flights undertaken by Prime Minister Narendra Modi has finally been paid. This has now been revealed by the Prime Minister’s Office (PMO) on its official website.

This bill has been paid nearly a year after the last bill of Rs 147.90 crore, which covered four flights each undertaken in 2013-14 and 2014-15 by former Prime Minister Manmohan Singh and his successor Modi, was cleared.

According to RTI activist, Commodore (Retd.) Lokesh K. Batra, who had filed RTI applications, it was on January 30 that Air-India finally received the sum of Rs 119.70 crore as payment for eight chartered flights taken by the prime ministers.

Batra had filed the RTI application on August 14, 2015, asking for details of expenses incurred on air travel during foreign visits made by Prime Minister Modi and former prime ministers. Additionally, he had sought the details for the filing of ‘flight returns’, the raising of bills or invoices, clearing of bills on completion of the visit and the copy of bills.

Batra had stated that the case involved substantive public interest as the bailout amount – which reportedly was in thousands of crores – being given to Air India was drawn out of the government exchequer and was the money of the taxpayers.

In his petition, Batra had also reflected on how such delays were impacting the balance sheets and operations of Air India stating that, “the airline reported an operating loss of Rs 2,636.10 crore in 2014-15 and lags behind in the targeted financial parameters laid down in the turnaround plan drawn up in 2012 when it got a bailout package of Rs 30,000 crore.”

He had also noted that there was a need to bring reforms to achieve more transparency in settling bills from the prime minister’s foreign visits as large amounts of tax-payers money was involved in it.

In its order in the matter though, Chief Information Commissioner R.K. Mathur had earlier in January 2017 ruled that the procedure involved in calculating the cost of foreign travel by the prime minister need not be disclosed due to “important security concerns.”

However, the commission agreed that “the appellant’s motive is to improve the governance and transparency in settling the bills of the PM’s foreign/domestic visits as public money is involved. The loss of public money can add to the burden of tax-payers.”

It had also observed that “the appellant has repeatedly stressed on timely payment of bills and the institution of suitable internal guidelines to facilitate payments. He has stated that this is in public interest. The respondents have taken note of this”.

Batra said on September 12, 2016, the PMO website had uploaded information that eight bills had been paid but later changed their status saying they were still “under process”.

He hoped that finally the public authorities will “institute suitable norms and guidelines to facilitate expeditious clearance of chartered flights bills as the issue is directly concerned to tax-payers money.”