Opposition members staged a walkout after their demand to send the Bill to a select committee was defeated.

New Delhi: The Union government succeeded to get the Right to Information (Amendment) Bill passed in the Rajya Sabha on Thursday with the support of Biju Janata Dal (BJD), Telangana Rashtra Samithi (TRS) and the YSR Congress. All the three parties were opposed to the RTI Bill because of which the Bill could not be tabled On Wednesday.

The passage of the controversial Bill in the upper house came as a blow to the opposition, which was hoping to send the seven Bills passed in the Lok Sabha during this session to legislative scrutiny. It expected to do so as the BJP-led National Democractic Alliance is marginally short of a simple majority in the upper house.

However, to stall the Bills, all the opposition parties had to stand united, and that didn’t happen.

Before the RTI Bill was taken up for consideration in the upper house, the government managed to bring on board parties which have often been labelled as fence-sitters. According to NDTV, Prime Minister Narendra Modi personally spoke to Odisha chief minister Naveen Patnaik for his party’s support for the Bill in the Rajya Sabha.

Once the passage of the Bill was guaranteed, the Congress staged a walkout before voting. The grand-old party, along with some other regional parties, wanted the Bill to be referred to a select committee. The Bill was easily passed in the Lok Sabha on July 25.

The BJD, which claims to have been following an equidistant policy vis-a-vis national parties, has of late been seen as tilting considerably towards the BJP’s side. Last month, it supported the BJP’s candidate, the former Odisha-cadre IAS officer Ashwini Vashnav, in the Rajya Sabha elections.

Despite siding with the opposition until Wednesday, the party appeared to have shifted its stand on Thursday. “We will question the government about our concerns and if we get a satisfactory response, we will think about it,” the BJD’s Prasanna Acharya was quoted as saying to the NDTV, when asked about his party’s decision on the Bill.

Similarly, YSR Congress leader and Andhra Pradesh chief minister Y.S. Jaganmohan Reddy has been warming up to the Centre and probably used his party’s support for the RTI Bill as a bargaining chip to raise his demand for a special category status for his state. “We will support the RTI (Amendment) Bill… It is not correct to demand that all bills be sent to the Standing Committee or Select Committee,” Vijaysai Reddy of YSR Congress told NDTV this morning.

The TRS’s support for the Bill came as a greater surprise, as among the three parties, its opposition to the Bill was the most vocal. “We are strongly opposed to the Bill. It not only dilutes the law, but downgrades the office of the Information Commissioners and their chief both at the state and the Centre,” Keshav Rao, senior leader of the TRS, had told NDTV a day ago.

Sources claimed that K. Chandrasekhar Rao’s party changed its stand after Union home minister Amit Shah reached out to him on Thursday morning. 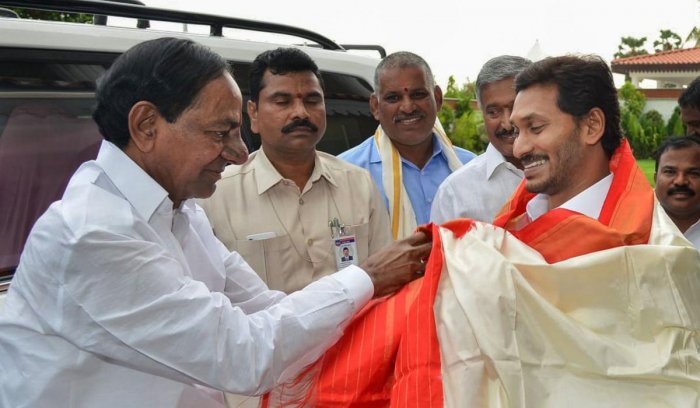 The support of K. Chandrasekhar Rao’s TRS, and Y.S. Jaganmohan Reddy’s YSR Congress party, along with that of the BJD was crucial for the Bill’s passage. Photo: PTI

The NDA was struggling to get the Bill passed in Rajya Sabha as it was six short of the majority mark. With 15 votes coming in from BJD, TRS and YSR Congress, the Bill passed comfortably.

Reduced to a minority, a few opposition leaders felt that the hasty passing of the law only shows trivial functioning of the parliament. “Parliament has to scrutinise. It needs time for scrutiny. This is not a T-20 match,” Trinamool Congress member Derek O’Brien said.

Another member said passing a Bill should not be like “making dosa”.

The RTI Bill has been a matter of controversy, with many RTI activists saying that the amendments can likely dilute provisions of the original law and lend the government both direct and indirect advantages to withhold information of public interest.

Sonia Gandhi had said that the amendments will subvert the historic RTI Act, which was “prepared after wide-spread consultations and passed unanimously by parliament”.

Congress leader Jairam Ramesh said the Bill is “designed to kill RTI”. He said PM Modi was taking “revenge” on the Act as RTI applications had revealed “embarrassing” details about his education qualifications, and on key claims made by his government, such as returning black money stashed abroad and weeding out bogus ration cards.

He also referred to Swati Chaturvedi’s report in The Wire on Raghuram Rajan giving the Prime Minister’s Office a list of high-profile NPA defaulters during his speech.

The amendments will allow the government to decide tenure, salary, and perks of the Information Commissioners at the Centre and the states. The government can now also and terms and conditions of their service.

Opposition parties, which have termed the amendment the “RTI Elimination Bill”, argue that authorising the government to take a call on the employment and pay of RTI authorities will take away their independence.

The government, on the other hand, argues that it is only strengthening the RTI law and fears regarding it are misplaced.

The government plans to extend the tenure of the monsoon session. In the days to come, it is highly likely that the remaining 15 pending Bills will also go through without much difficulty.