Police Double Standards, JNU and a Most Dubious Press Conference

By now we should be used to the novel ways in which the state machinery presided over by the Modi-Shah government has propped itself up with no concern for matters like the truth or the integrity of institutions. 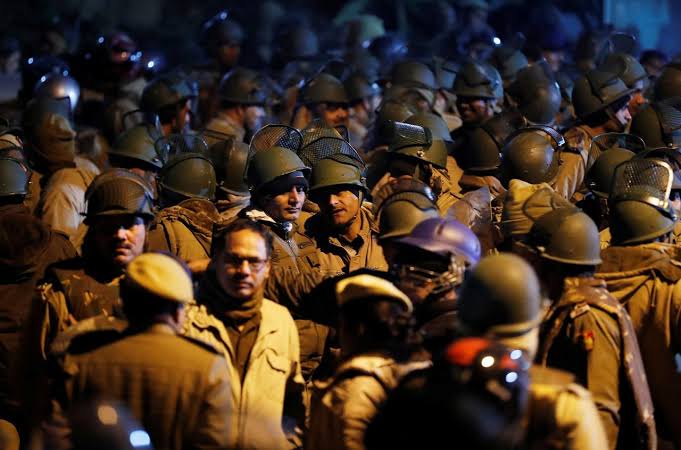 In normal circumstances, the fact that the Delhi police summoned a press conference to name Aishe Ghosh as a prime suspect in instigating violence on the Jawaharlal Nehru University campus last week would seem utterly bizarre. Badly beaten up by masked men who invaded the campus, Ghosh, who is the JNUSU president, received 16 stitches on her head in addition to fracturing her left arm.

But then, the times we are living through are far from normal. Rather than address critical questions arising from last Sunday’s planned outburst of violence that left 36 injured, the Delhi police tried to present a sequence of events for the events that evening, which looks more like an alibi for the force’s incompetence than a true account of what happened.

Within hours of the press conference, ABVP took out a protest march on campus, denouncing “Red Terror”. JNU Vice Chancellor M. Jagadesh Kumar, who was missing from his own campus during the crucial days of violence, suddenly began appearing on TV channels. He talked about the vandalisation of server rooms on campus but had nothing to say about injured students.

Minutes after the Delhi police named Left students as suspects, Union minister Prakash Javadekar said: “Today’s police press conference established that for the last five days, the chorus that was created deliberately to blame ABVP, BJP and others, wasn’t true. It is the Left organisations that pre-planned violence, disabled CCTVs and destroyed servers.”

But then soon, India Today‘s revelation left the government and police with red faces. Barely an hour after the police’s press conference, a sting operation was telecast in which two first-year BA (French) students, declaring themselves to be ABVP members, “confessed” to their participation in the violence. The students also acknowledged the police were present on campus, as was a policeman – who, in fact, had egged the mob on.

“The second student said he gave the other student his “helmet as it is a must for safety when you break glass,” according to the report. The mob consisted of 20 ABVP activists from JNU, the student said. The sting showed another JNU student, a member of AISA, who is a PhD student, admitting to her role in disrupting the server room on the campus.

The customary police sleight of hand is clearly in play in this case, just as it was also in play during other recent incidents of violence, particularly in Uttar Pradesh. The whole purpose of Friday’s press conference seemed to be to point fingers at Left student organisations. To set the tone and tenor of the investigation, which in coming days, is likely to weigh against the Left students. As Delhi Police asked mediapersons to focus on the “sequence” of events, thoughts turned to Union home minister Amit Shah’s by now well-known one liner: “Aap chronology samajh lijiye (understand the chronology): first CAA and then NRC.”

Drawing attention to the Citizenship (Amendment) Act and the National Register of Citizens as conjoined policies, Shah said people must understand that the introduction of the CAA will be followed by NRC – the very position his party is now claiming it never took.

Following in the home minister’s footsteps, DCP Tirkey focussed on the sequence of events on JNU campus. Keeping mum about the masked men beating up students with sledgehammers and rods, Tirkey instead accused Left students of destroying the servers at the university. Refusing to talk about the large-scale violence on the JNU campus on January 5, he instead shifted the focus to January 3 and January 4, when the Left students allegedly destroyed the servers in question. Is there any equivalence between pulling out server cables and thrashing students and faculty?

Last month’s aggressive and violent police action against Jamia students and the passive inaction in JNU, underlines the double standards of the police. An internal investigation earlier this month revealed that at least three bullets were fired by Delhi Police personnel during protests against the CAA last month. The revelations contradicted the official version that the police did not fire a single bullet.  In stark contrast to their conduct in Jamia Milia Islamia, Aligarh Muslim University and Uttar Pradesh, the police in JNU stood by and watched the mob beat up students and faculty.

Even before the investigations have concluded, Friday’s premature press conference raised more questions that it answered. Questions raising doubts about the intent of the police and the direction of its investigations. How did the masked men escape despite the police presence outside the university gates? Why were the lights switched off? Who switched them off? What were the police doing in the hours the mob was running amok terrorising people? Why did the police not furnish photos of the masked men wielding rods and sledgehammers at the press conference or initiate any other tangible moves to track those people down?

We have moved into an era where property is constantly elevated above human life, particularly dissident human life. We have repeatedly heard UP chief minister Adityanath vouch that he will take “badla” against CAA-NRC protesters for destroying public property.

It is, of course, another matter that recently law enforcers have themselves been guilty of destroying property in Aligarh Muslim University and Jamia Milia University. And that the foundations of the contemporary Hindu Right’s corrosive effect on Indian life were built by destroying the Babri Masjid.

By now, we should be used to the novel ways in which the state machinery presided over by the Modi-Shah government has propped itself up with no concern for matters like the truth or the integrity of institutions. Everything can be sacrificed, sold, bartered, disposed off, in the service of their desire for power. The police are a crucial component of this armoury that does little else apart from implementing the wishes of their masters, no matter what the nature of their demands.