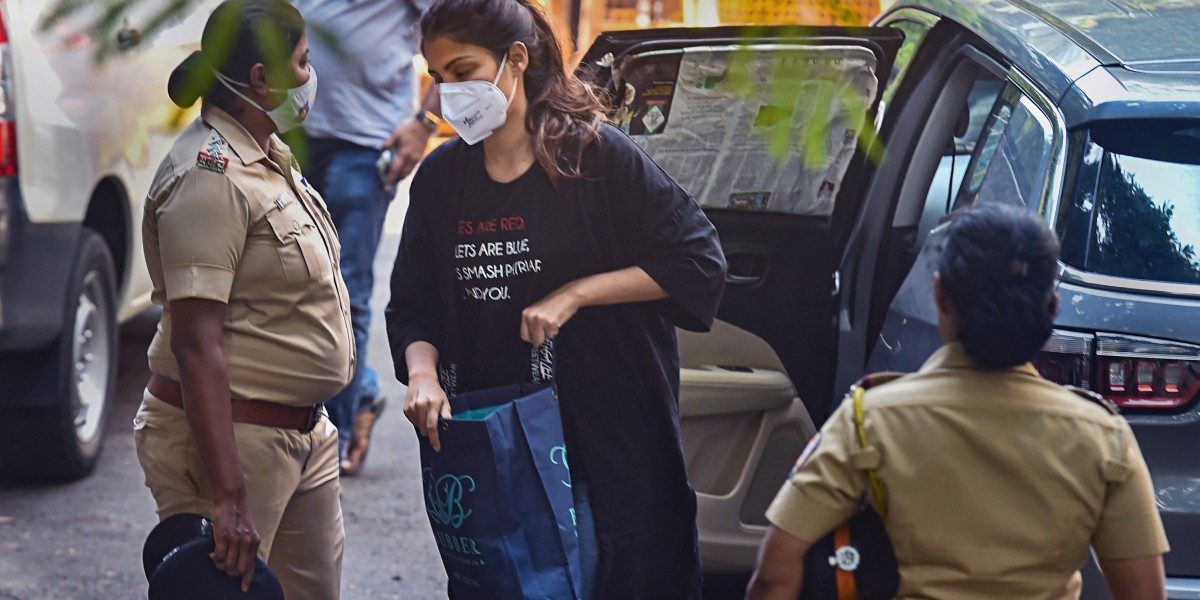 Rhea Chakraborty arrives at the NCB office in Mumbai on September 8. Photo: PTI

New Delhi: Actor Rhea Chakraborty was arrested by the Narcotics Control Bureau, after appearing for questioning in the drugs case linked to the death of actor Sushant Singh Rajput for the third consecutive day on Tuesday.

She will be produced before a magistrate through video conferencing by 7.30 pm, ANI has reported.

K.P.S. Malhotra, deputy director of the Narcotics Control Bureau, confirmed her arrest at 4 pm. The NCB did not seek further custody of Rhea, but opposed her bail, Indian Express quoted NCB deputy DG Mutha Ashok Jain as having said. She has been remanded in judicial custody till September 21.

The NCB is headed by Rakesh Asthana, against whom the CBI, under the directorship of Alok Verma, had decided to file an FIR for taking bribes.

Chakraborty’s appearances at the questionings had led to scenes of pitched media attention, which many likened to a witch-hunt. Photographs of journalists shoving mics at her and hounding her on day one of the interrogation have gone viral on social media.

Among the first to react to the news of her arrest was Bihar DGP Gupteshwar Pandey, whose curious attention to the case has been explored in a piece by Umesh Kumar Ray on The Wire.

Chakraborty’s lawyer Satish Maneshinde, according to a tweet by journalist Rajdeep Sardesai, has called her arrest a “travesty of justice”.

1st reaction from @Tweet2Rhea lawyer: Travesty of Justice. 3 Central Agencies hounding single Woman , just because she was in love with a Drug Addict who was suffering from Mental Health issues for several years under care of 5 Leading Psychiatrists and then committed suicide.

Several others have called the arrest the mark of a section of media ‘winning’ in imposing the foregone conclusion of a trial that has been playing out on primetime for a month now.

So they couldn’t find any evidence of Murder (Obviously because it was Suicide), or Money Laundering (There wasn’t any Money), so to satisfy the lynch mob, arrested Rhea Chakraborty in a Drug Consumption and Procurement Case (That she used to Procure for Sushant Singh Rajput)

How this regime uses investigating agencies and harasses opposition leaders before important elections is well known. But they could do the same with a young, fledgling actress in Mumbai is quite remarkable. Machiavelli may not have thought of this!

Truly convinced today that there’s nothing more dangerous in the word than stupidity. pic.twitter.com/BfQPPP8n3D

Oh good, we finally know why marijuana is still criminalised in a country with a cultural history of ganja, so the Union home ministry’s agencies can arrest random girls who have been accused of murder, conspiracy and god knows what else by Chief Justice Goswami

Surreal times. India faces threat of war and economic collapse. But the news is obsessing over a few grams of marijuana. Mass scale smoking up.

The current NCB probe began after the ED shared with it a report, after it cloned two mobile phones belonging to the actor, and arrived at the conclusion that her private conversations suggested procurement, transaction and consumption of banned drugs, PTI has reported.

On Tuesday, Chakraborty reached the Narcotics Control Bureau (NCB) office located at Ballard Estate in south Mumbai, around 10.30 am in a car escorted by a Mumbai Police vehicle.

Earlier, she was questioned by the NCB for about eight hours on Monday and six hours on Sunday.

The agency earlier said it was getting “her cooperation” in the drugs case probe linked to case of death of Rajput (34), who passed away at his apartment in suburban Bandra on June 14.

After the questioning session on Monday, NCB Deputy Director General (south-west region) Mutha Ashok Jain told reporters that the agency was doing a “professionally thorough and systematic job” and it will inform the court about its “findings in detail” in this case.

Rhea Chakraborty was earlier questioned by the Enforcement Directorate (ED) and the Central Bureau of Investigation (CBI) that are also probing Rajput’s death.

In her interviews given to multiple TV news channels, the actor had said she has never consumed drugs herself.

A total of nine people have been arrested till now by the NCB with seven directly linked to this probe, while two were arrested when the investigation was launched under criminal sections of the Narcotic Drugs and Psychotropic Substances (NDPS) Act.

If you know someone – friend or family member – at risk of suicide, please reach out to them. The Suicide Prevention India Foundation maintains a list of telephone numbers (www.spif.in/seek-help/) they can call to speak in confidence. You could also refer or accompany them to the nearest hospital.

Note: This is a developing story.