'Revdi Culture' or Govt's Basic Responsibility? What Prioritising Welfare Is Really About

States like Delhi (despite its unique multi-party governance architecture), West Bengal, Kerala (or even Goa and Sikkim) perform better compared to UP when it comes to being measured for securing access to basic social, economic services.

In a veiled attack against BJP’s political opponents, accusing them of promising ‘freebies’ (revdi) in exchange for electoral votes, Prime Minister Narendra Modi on Saturday cautioned people, especially the youth, against this “revdi culture”, saying it is “very dangerous” for the country, its development and its well-being.

Speaking in Kaitheri, Jalaun district after inaugurating the Bundelkhand Expressway in the state of Uttar Pradesh, which performs the lowest in most key social-economic development indicators, and has one of the poorest state-level fiscal performances, Modi said:

In a response that teared into the prime minister’s statement, AAP leader and Delhi chief minister Arvind Kejriwal said:

“There are allegations being made against me that Kejriwal is distributing free revdis, he’s distributing freebies. I’m being abused and made fun of. I want to ask the people of the country, what am I doing wrong? I’m giving free and quality education to the children of poor and middle-class households in Delhi. I want to ask people, am I distributing free revdis or setting the foundation of the country?… If anybody has an accident in Delhi, under the Farishtay scheme, if somebody takes them to hospital, their treatment is done free of cost… We have saved the lives of over 13 lakh people. Ask them if Kejriwal is giving free revdis or doing noble work.”

Kejriwal said giving free and quality services to the public was not free revdi. In fact, he said, free revdi included giving undue benefits to certain corporates and ministers. He also talked about AAP’s free electricity scheme and its critics:

“People say why does Kejriwal give free electricity? I want to ask them – how much free electricity do your ministers get? When you and your ministers get 4,000-5,000 units of electricity free, then it’s fine. But if I give the poor 200-300 units of free electricity, you have a lot of problem. Despite making so many things free, the Delhi budget is running in profit today. I’m not saying this, just a few days back the CAG report has come. They have said that since 2015, since the Kejriwal government has come, Delhi’s budget has been running in profit; before that it was running at a loss.”

The comparison between Delhi’s improved fiscal performance and its link with better social-economic performance (in terms of access to basic education, healthcare and employment based guarantee safety nets) has been well established.

In Delhi’s AAP governance model, targeted social investments in basic healthcare, education, nutrition and access to drinking water, while meeting standards of quality and affordability, has helped act as a positive multiplier effect on improving the overall human capital development levels of the state’s population. Let’s look at education as an example.

Under AAP, the government announced a 106% increase in government allocation on education in its very first budget. The increase in funds have allowed government schools across Delhi to construct over 8,000 new classrooms, and more than 12,000 classrooms have been upgraded with new amenities (for laboratories, conference facilities etc).

Efforts have been taken to improve the in-class performance of teachers and staff, including an exercise of sending more than 200 teachers to receive pedagogical training at the National Institute of Education in Singapore. Similarly, in healthcare too, AAP’s experiment with establishment of mohalla clinics appears to have worked for the benefit of those finding it difficult to get affordable treatment that doesn’t require hospitalisation in an otherwise heavily privatised (deeply exploitative) medical landscape across Delhi. There are currently over 300 Mohalla clinics where more than 212 lab tests, diagnostics and generic medicines are provided free of cost.

The improved quality of government schooling (and primary healthcare access) in and across Delhi created a positive effect for the AAP as a ‘viable alternative’, and the opposition party came to power in Punjab too more recently.

If AAP did well in Delhi on creating easier access to basic education and healthcare, equally well-established is the fact on how UP’s own ‘double engine sarkar’ (Yogi-Modi combine), with its poor fiscal position and high debt ratio, has failed to improve the state’s socio-economic performance (in areas of education, healthcare and job creation).

I previously analysed these links with data-backed insights, arguing how and why the ‘welfare-driven’ model of governance followed by the AAP in Delhi, showcasing that high government spending on developing social and economic capabilities amongst state-populations, also reflected in the state-wide governance models of TMC in West Bengal and the Left Democratic Front (LDF) in Kerala provided an alternative ‘regional’ opposition to BJP’s governance model (which reduced its spending on social welfare as seen in UP).

Our Centre for New Economics Studies (CNES’) Access (In)Equality Index (AEI) in 2021 observed how states like Delhi (despite its unique multi-party governance architecture), West Bengal, Kerala (or even Goa and Sikkim) perform better compared to UP when it comes to being measured for securing access to basic social, economic services.

For context, in the methodological design of the Access (In)Equality Index (AEI), we measured overall access, using a geometric mean in order to ensure partial compensability, i.e. poor performance in one sub-index is not fully compensated by good performance in another. It also balances the uneven performance in the dimensions and encourages improvements in the weaker dimensions. Other prominent indices like the Human Development Index and Sustainable Society Index use the geometric mean for aggregation as well. 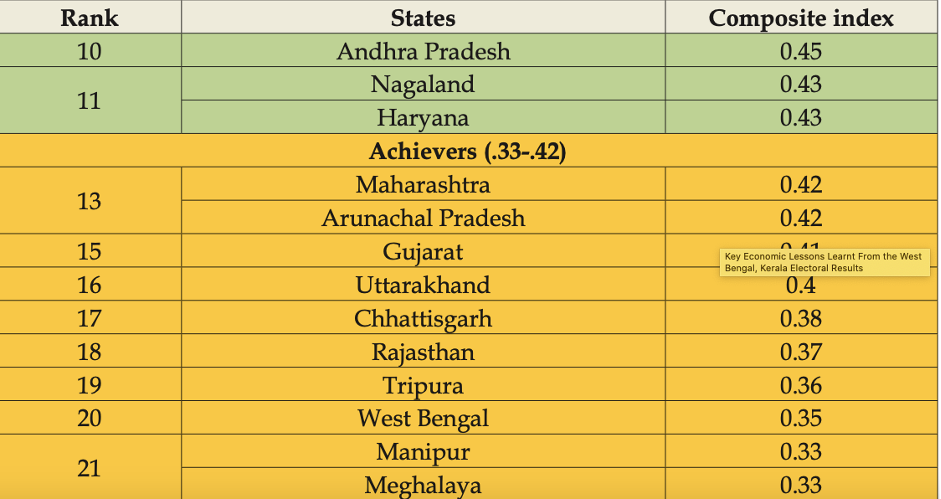 Based on the score range of 0.67-0.23, states are grouped into three categories – ‘Aspirants’ (below 0.33), ‘Achievers’ (0.42-0.33) and ‘Front Runners’ (above 0.42). Bihar, Uttar Pradesh, Jharkhand, Assam, Odisha and Madhya Pradesh fall under ‘Aspirants’, requiring sustained efforts to improve ‘access’ to basic socio-economic opportunities (across all identified pillars).

States like Maharashtra, Arunachal Pradesh, Gujarat, Uttarakhand, Chhattisgarh, Rajasthan, Tripura, West Bengal, Manipur and Meghalaya are categorised as ‘Achievers’. These states have good provisions of access to (socio-economic) opportunities and must sustain their efforts to advance to the next category. Lastly, states such as Goa, Sikkim, Tamil Nadu, Kerala, Himachal Pradesh, Telangana, Punjab, Mizoram and Karnataka are observed as ‘Front Runners’ in ensuring better access to basic socio-economic opportunities for their respective state-populations.

Delhi here was ranked as a Front Runner too with an index score of 0.49 while UP was second lowest (as a ‘Aspirant) scoring 0.28 (More details accessible from here).

Taking note of these facts, while acknowledging the fallacies in prime minister’s own remarks, and despite the electoral win for the Yogi-led BJP government, the grassroots reality of Uttar Pradesh’s poor socio-economic position cannot be ignored. The angst expressed by the youth in the recent protests against BJP’s Agnipath scheme both, in and across UP, was simply a case in point reflecting how issues of unemployment, poor job creation remains a core concern in the state and some of the other states too where BJP is in power.