The Delhi Police released a list of 122 arrested people after the joint farmers’ front alleged that over 100 people who went missing were kept in illegal detention. 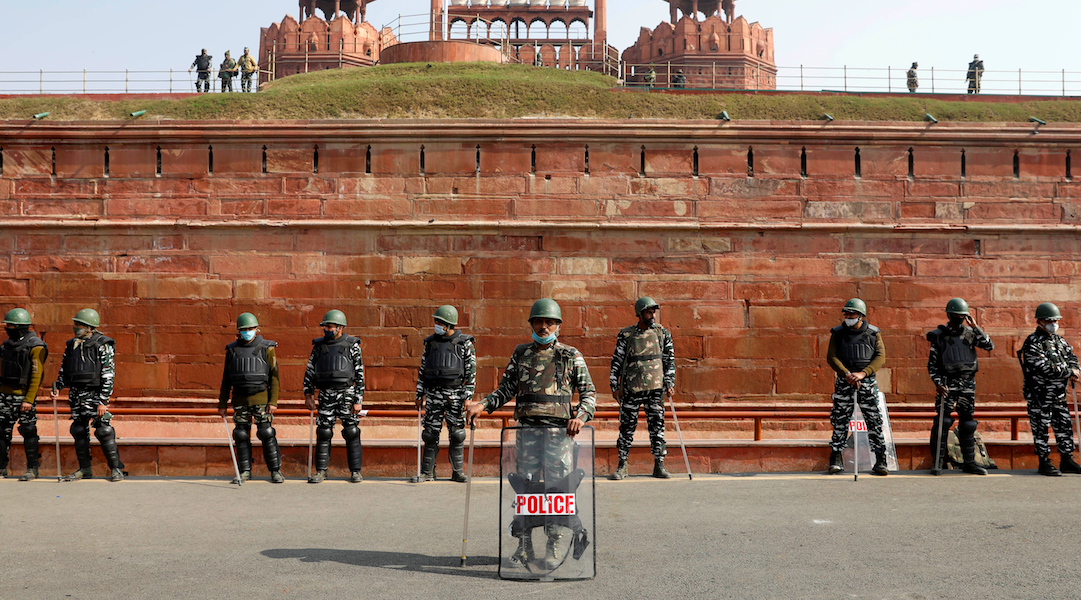 Policemen stand guard in front of the historic Red Fort after clashes between police and farmers, in the old quarters of Delhi, India, January 27, 2021. Photo: Reuters/Adnan Abidi

Mohali: A day after the Delhi Police released a list of 122 people arrested under multiple charges including attempt to murder and criminal conspiracy, due to their participation in the Republic Day tractor rally, the joint farmers’ front – Samyukta Kisan Morcha – has said that the Delhi government has provided it with another list of 115 arrested people.

According to SKM, roughly 29 people who were arrested from various places in New Delhi are still missing. The SKM is yet to compare the two lists and arrive at a definitive total of the people arrested.

“We have been informed that people who were following the set route have also been detained and their whereabouts have not been given to their families yet. But we assure you that we will provide all legal assistance to each and every person,” a member of the SKM said while addressing the press conference.

On February 1, the Delhi Police released a list of 122 people arrested from different parts of the city after the joint farmers’ front alleged that over 100 people who went missing were kept in illegal detention.


For a week, at least 12 families from village Tatrianwale in Moga were in the dark about members who did not return from the Republic Day tractor rally as planned.

Similarly, at least seven people from Bhatinda district’s Talwandi Sabo were arrested in Delhi. Neither were family members informed and nor their home police stations, the senior superintendent of Bathinda Police, Balwinder Singh told The Wire. “Ideally, the home police station should be informed but we didn’t know,” he said.

In the list released by Delhi Police on February 1, the names of those who were said to be missing from Tatrianwale in Moga are included.

The Punjab Human Rights Commission, along with a committee of lawyers formed by the joint farmers’ front, has announced that they will be providing free legal aid to those arrested. In addition, the Punjab government under Congress leader Captain Amarinder Singh has said that they will provide legal assistance too. The Delhi Gurudwara Committee under Manjinder Sirsa has also provided legal support. The Shiromani Akali Dal has floated a helpline number and legal assistance service as well.

In addition, to nab the youngsters who hoisted the flag atop one of the poles at Red Fort, the Delhi Police raided the home of Amarinderpal Singh at Jalandhar’s Basti Bawa Khel area on January 30.

Speaking to The Wire the DCP of Jalandhar Police, Gurmeet Singh said that to trace Navpreet Singh – one of the young men present with Jugraj Singh who hoisted the Nishan Sahib at the Red Fort – the Delhi Police raided Navpreet’s relative, Amarinderpal Singh’s home.

When asked if the Delhi Police followed due diligence and informed the local police before conducting the raid, Singh said, “Yes, we were given proper information.” According to a news report in Tribune, senior Punjab Police officials had said that there was no official communication from the central agencies about the raids.

However, both DCP Jalandhar and Additional DGP (law and order) Punjab Police told The Wire that they were informed.