The FIR, filed after a complaint by Asaduddin Owaisi, says Sharma allegedly used "abusive, false and hurtful" words against the Prophet Muhammad and the Islam religion. 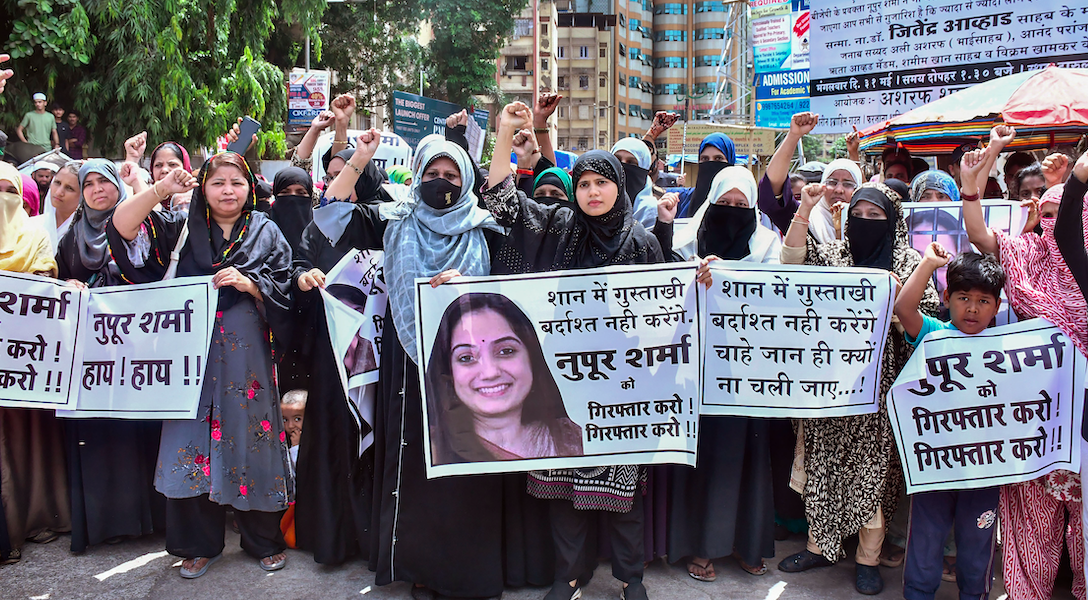 A protest against Nupur Sharma over her alleged remarks on Prophet Mohammad, in Thane, Tuesday, May 31, 2022. Photo: PTI

The All India Majlis-e-Ittehadul Muslimeen chief tweeted a copy of the FIR against BJP’s Nupur Sharma on Twitter. The FIR accuses Sharma of using “abusive, false and hurtful” words against the Prophet Muhammad and the Islam religion.

She is charged under section 504 (intentional insult with intent to provoke breach of the peace) of the IPC.

The FIR mentions that these remarks came during a debate on the Times Now channel.

FIR has been registered against BJP spokesperson who insulted Prophet Mohammed PBUH in Hyderabad under Cyber Crime PS pic.twitter.com/ZjAaBKJmPm

Owaisi noted that an FIR was registered against former BJP leader Qavi Abbasi of the Inquilab Party for allegedly threatening Sharma in the light of her comments.

Thane police in Maharashtra on Monday, May 30, had booked Sharma under sections 298 (uttering, words, etc., with deliberate intent to wound the religious feelings of any person), 294 (obscene acts and songs), 153A (promoting enmity between different groups on grounds of religion, race, place of birth, residence, language, etc) and 505B (statements conducing to public mischief) of the Indian Penal Code.

Sharma has been booked “for hurting religious sentiments and other offences based on a complaint,” Senior Inspector Ashok Kadlag of Mumbra police station said.

In the aftermath of the remarks airing on TV, Sharma had appeared to place “responsibility” on Mohammed Zubair of the fact-checking website AltNews, who had tweeted the clip.

.@CPDelhi please note wholly & solely @zoo_bear is responsible who instead of ‘fact-checking’ peddled a fake-narrative to vitiate the atmosphere, cause communal disharmony & cause communal & targeted hatred against me & my family

AltNews has said that the clip was unedited and that Sharma’s claim is false, offering a longer video where she can purportedly be heard making the same comments.

The claim that @zoo_bear put out an edited video is completely false, and it is a lie propagated by @NupurSharmaBJP. Zubair put an unedited clip of the relevant part of the video where Nupur Sharma uses derogatory/insulting language on live TV. 1/n pic.twitter.com/5EA00g9lz9