Red Herrings in the Debate on Kashmir

Resorting to secularism and federalism as the basis of a rejection of the constitution of India for Kashmir alone is not credible. 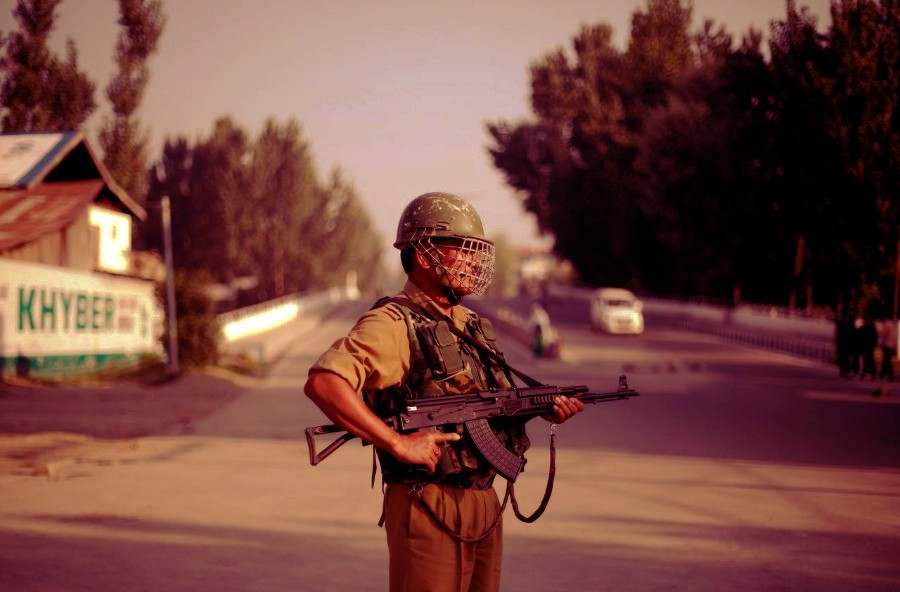 An Indian security personnel stands guard on a deserted road during restrictions after scrapping of the special constitutional status for Kashmir by the Indian government, in Srinagar, August 23, 2019. Photo: Reuters/Adnan Abidi

The touchstone of democracy is democracy and nothing else, not even nationalism and secularism – both of which have been evoked to justify alternative stances in the debate that has followed the revocation of Articles 370 and 35A which once defined Kashmir’s relationship with India.

However important nationalism and secularism may be, they are trumped by the commitment to democracy that a democracy must exhibit at every turn.

The constitutional validity of the reading down of Article 370 has since been challenged in the Supreme Court. Some of the most respected and independent legal minds in the country have observed that the government’s procedure is constitutionally valid; we may presume that this argument is correct.

However, while legality is a necessary condition it cannot be deemed sufficient in a democracy. The fact is that the act of revocation was unilateral. Walter Bagehot described democracy as “government by discussion” and this is by now a widely recognised aspect of democratic governance.

By this criterion, the method of revocation fails to earn our respect. We can guess how it is viewed in the Kashmir Valley. Not only was the legislation rushed through parliament, but it was done without any discussion with the Kashmiris.

Indian democracy has blotted its copybook by having changed the status of one of it states not just unilaterally, but in an environment that may be called a siege. Everyday life has been shut down, schools closed and communication channels blocked by government, but above all there was preventive detention.

These are the methods of an authoritarian regime.

Among those arrested is the entire Kashmiri leadership. Of course, the government of India would be entirely within its rights to suppress any violent agitation that may have followed the announcement, and a section of the Kashmiri population has demonstrated that it does not respect democratic processes, but preventive detention is another matter. Also that Article 370 had been hollowed out by successive presidential orders by then is irrelevant to the argument being made. Not only have the means adopted been undemocratic in form but it has caused great suffering in the valley.

It is not just a matter of some inconvenience caused by curfew and shortages of essentials for a few days. The completely unanticipated news could only have come across as a shock due to a sense of having been abandoned.

Also read: Ground Report: Agony and Casualties in the Valley in the Immediate Aftermath of Shutdown

The reason given for the removal of Article 35A was that it would help the Kashmiris by bringing about vikas or economic development. This is a moot point. For close to five years now we have been facing a lull in investment in the country as a whole and it is not certain that entrepreneurs are raring to go to Kashmir to set up shop.

How long the tension will last would be a major factor weighing in with them and we are going to have to wait and watch. But even if the move is going to raise the state’s GDP that may yet not be enough for Kashmiris to accept that the privileges they had come to take for granted have been taken away. It is not known widely enough in the country that Kashmir has superior social indicators and lower poverty than the rest of the country, even though unemployment is high. Kashmiri women walk past concertina wire laid across a road during restrictions after the scrapping of the special constitutional status for Kashmir by the Indian government, in Srinagar, August 20, 2019. Photo: Reuters/Adnan Abidi

Does the feature of the revocation of Articles 370 and 35A not meeting the democratic criterion of governance by discussion render them democratic in content?

Further, would they be rendered acceptable as part of an institutional architecture that we would treat as democratic by reference to some other ideal such as secularism and federalism?

To see that this cannot be so, we need only to take a look at the content of these articles. Article 370 provided that the constitution of India does not extend to Kashmir, while Article 35A granted the state the right to maintain practices impinging upon the rights of women, prevent ‘outsiders’ from buying land and determine citizenship according to criteria of its own. This arrangement is not democratic.

Let us look at the two articles in turn. A constitution is part and parcel of a democracy specifying the principles by which it will be governed. To allow any one a member of a union of states to circumvent these principles is to express lack of commitment to these principles, in this case of the Indian Union to the constitution of India.

India has a thoroughly democratic constitution arrived at after due deliberation. It would be difficult to find anything in it that is of cultural or religious provenance in it. It contains only abstract principles. Why should any constituent member of the Indian Union feel that their identity is in some way threatened by adhering to it? Resorting to secularism and federalism as the basis of a rejection of the constitution of India for Kashmir alone is not credible.

What about Article 35A? It should not be too difficult to see that its contents go against the grain of democracy. It would be abhorrent that women are denied equal rights in any part of the Indian Union. The provision denying ‘outsiders’ the right to purchase land may be less so but it can hardly pass muster in a union of states. The argument that such a provision also exists in states other than Kashmir only strengthens the case for discontinuing it there. It is intuitive that when diverse people come together to form a union they do so in a spirit of mutual acceptance.

In the final analysis, procedural validity is not enough to justify the extension to Kashmir of the constitution of India, even when it may have been preceded by discussion. We have to contend with consent – in this case that of the people of Kashmir.

Even the untenability from a democratic point of view of Articles 370 and Article 35A does not by itself morally entitle the Indian Union to hold Kashmir without its consent. This was seen early by Jawaharlal Nehru when soon after the accession of the state to India he promised a referendum to settle the matter. Nehru was here conveying the understanding that something more than mere legality was needed to cement a political union. It was after all the case of a feudal entity acceding to a democracy, and India had no choice but to take the democratic route in the matter. For reasons not fully known, but among them surely the fact that Pakistan never withdrew from the regions of Kashmir it had illegally occupied, the referendum did not happen.

But we should not hold our own democratic conscience hostage to the actions of a militarised state with neither legal nor moral equity in Kashmir. In the context, only a referendum on what the future relationship between Kashmir and India should be would be conscionable, not to mention ensure peace in the long run.

It does come with the possibility that a part of the state may choose to remain separate from India, but this must be faced. Of course, a referendum can come only after a guarantee has been provided to Pandits,  Buddhists and Muslims that their religious rights would be respected and personal security assured, whatever the outcome.

This is going to be a challenge and may well require international mediation. False prestige should not be allowed to come in the way of our seeking a just and honourable solution.