Debate: Five Aadhaar Myths that Don't Stand Up to Scrutiny 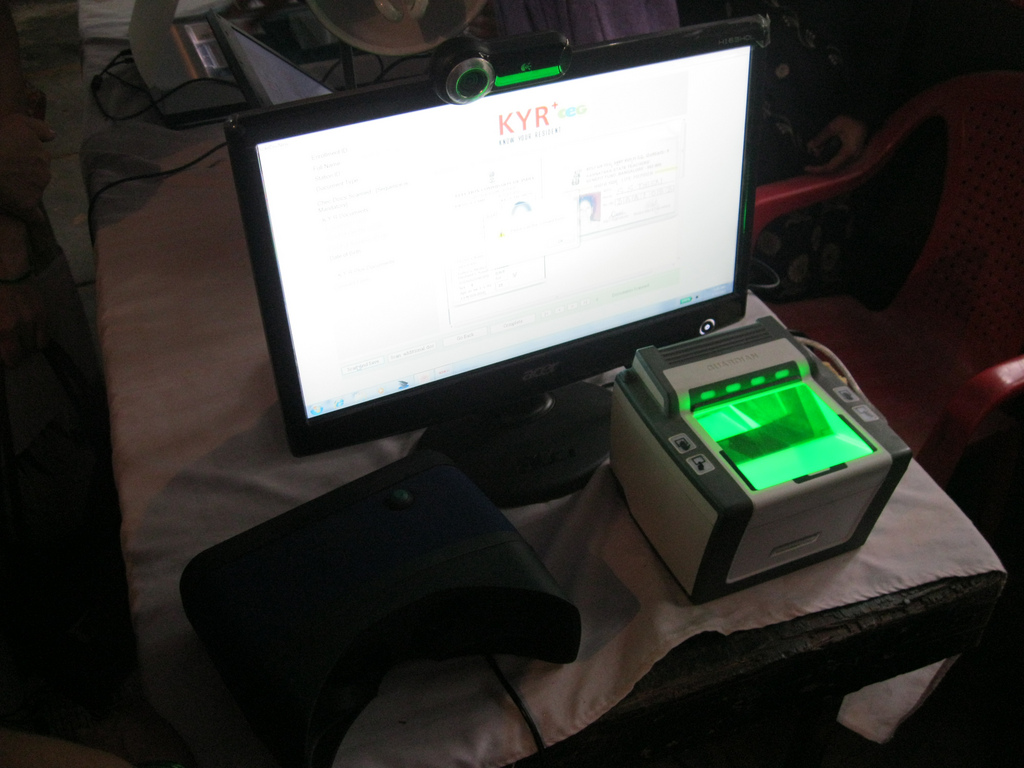 Stand up and get your fingerprints analysed! Credit: julian correa, CC BY 2.0/Flickr

A recent article, ‘Identification simplified, myths busted’, by Piyush Peshwani and Bhuwan Joshi (hereafter, Peshwani & Joshi) makes some questionable claims about the UID project. Peshwani & Joshi’s strategy appears to be to ignore those questions to which they do not have an answer (e.g., that Aadhaar is mostly redundant as far as NREGA, PDS, etc., are concerned). For others, they cherry-pick ‘facts’ without acknowledging the debates surrounding those facts. Here is a selection.

Peshwani & Joshi: “For many, Aadhaar is perhaps the first document of their existence – a robust proof of their identity and address that can be verified online. No more closed doors for them!”

Peshwani & Joshi: “The Demographic Data Standards and Verification Procedures committee prescribes a list of valid 18 proof of identity and 33 valid proof of address documents for getting an Aadhaar.”

As far as closed doors are concerned, Aadhaar does not guarantee any benefits: work through NREGA, widow or old-age pensions or PDS rations. There are separate eligibility conditions for those programmes which continue to apply.

Peshwani & Joshi: “Does it justify the cost? Yes, absolutely, according to the World Bank, which said the initiative is estimated to be saving the Indian government about $1 billion annually by thwarting corruption, even as it underlined that digital technologies promote inclusion, efficiency and innovation.”

Fact: Savings due to the use of Aadhaar have been disputed. The government has claimed it has saved Rs. 14,672 crore on LPG subsidies due to Aadhaar while they are likely lower – by a factor of 100 (see Business Standard or Wall Street Journal).

Peshwani & Joshi: “Even before the World Bank’s endorsement of Aadhaar, the Delhi-based National Institute of Public Finance and Policy (NIPFP) conducted a detailed cost-analysis study on Aadhaar in 2012… the study found that the Aadhaar project would yield an internal rate of return in real terms of 52.85% to the government.”

Fact: The NIPFP cost-benefit was based on unrealistic assumptions – e.g., estimates of leakages that Aadhaar could plug were available for only two out of seven schemes; for the rest, they assumed leakage rates which are termed ‘conservative’, but are actually not.

In their response, the NIPFP team admitted that “a full-fledged cost benefit analysis of Aadhaar is difficult” because “many gains from Aadhaar are difficult to quantify because they are intangible” and, “even if in specific schemes there may be tangible benefits, the information available on those schemes does not permit a precise quantification of those benefits.”

They went on to say that “The study has steered away from relying exclusively on analyses of isolated and small sample sets”. What evidence did the NIPFP study rely on? “For ASHAs, Janani Suraksha Yojana and scholarships, no analysis, large or small has been used. For the Indira Awaas Yojana, the three analyses relied on exclusively are a Times of India news report, a press release based on a discussion in Parliament and a “Scheme Brief” by the Institute for Financial Management and Research (IFMR). Interestingly, the corruption estimate in the IFMR brief cross-refers to the Times of India article (apart from a CAG report)!” (Khera, 2013)

Peshwani & Joshi: “Aadhaar means no fake, ghost or duplicate beneficiaries. Double-dipping will become more and more difficult with Aadhaar, a number that is well de-duplicated with the use of biometrics.”

Fact: De-duplication is one possible contribution of Aadhaar – but that needs biometrics, not a centralised biometric database. Local biometrics (used extensively in Andhra Pradesh before UID) mean that biometric data is stored by the concerned government department or on the local e-POS machine’s memory chip. It has the advantage that connectivity is not required (you are authenticated by the machine), errors and corrections can be correctly locally, making it more practical. The distinction between a local and centralised database is important (see #5 below).

Further, no one has a reliable estimate of the duplication problem. Two government estimates of duplicates exist: the Dhande committee for LPG (2%) and in NREGA job cards from the Government of Andhra Pradesh (also 2%).

Peshwani & Joshi: “As far as exclusion in delivery of other services due to biometric authentication accuracy is concerned, it is important to go beyond scratching the surface.”

Fact: When the PDS was integrated with Aadhaar: “The Andhra Pradesh Food and Civil Supplies Corporation found that…nearly one-fifth ration card holders did not buy their ration.” Further, “When the government delved deeper in the issue, it was found that out of the 790 cases interviewed for the study, 400 reported exclusion. Out of the excluded cases, 290 were due to fingerprint mismatch and 93 were because of Aadhaar card mismatch. The remaining 17 cases were due to failure of E-PoS.” More here.

Moreover, Peshwani & Joshi pick one definition of ‘exclusion’ (due to biometric failure) when in fact, exclusion has a broader meaning. For instance, “In Chitradurga (Karnataka), Rs.100-150 million in wages from 2014-15 were held up for a year. When payments were being processed, their job cards could not be traced in NREGAsoft. Upon enquiry, the district administration learnt field staff had deleted them to achieve ‘100% Aadhaar-seeding’.”

Peshwani & Joshi: “A prominent criticism of Aadhaar is that it ‘profiles’ people.” …“Most of us have one or more identity/address documents, such as a passport, ration card, PAN card, driving licence, vehicle registration documents or a voter ID card. The government departments managing these already have our data. Aadhaar is no different. We give our data to banks, to insurance companies and to telecom companies for accounts, policies and mobile connections.”

Fact: That’s like saying BJP can be more corrupt because the Congress was corrupt. Instead we need to engage more seriously with the work of Sunil Abraham, Amber Sinha and others at the Centre of Internet and Society. There are crucial differences between Aadhaar and Social Security Number in the US, see this. Malavika Jayaram listed the UID project among a slew of “big brother” projects facilitating mass surveillance in India.

The debate on UID tends to begin with the premise that Aadhaar is necessary for ‘good governance’. Those claims of the UIDAI have long been demolished. In a nutshell, Aadhaar cannot help identify the poor, its possession does not guarantee inclusion into government social welfare (go to #1).  It cannot reduce PDS or NREGA corruption as claimed in their early documents. Thankfully, PDS–NREGA corruption has been on the decline without Aadhaar – more needs to be done. (More details? Try this and this.) Bihar shows how much corruption in the PDS can be reduced without Aadhaar. Credit: Reetika Khera

Aadhaar is not required for portability of benefits or for cash transfers. Cash transfers need bank accounts. To get a bank account, you need a proof of ID and a proof of address (go to #1). Aadhaar can help de-duplicate, but so can local biometrics (go to #3).  We need to “reboot” the Aadhaar debate, starting on the right terms – why exactly do we need to create a centralised biometric database of Indian residents?