The MoD’s catalogue of reforms is at best questionable and at worst repetitive, in what many military officers said was little more than a ‘feel good’ document. 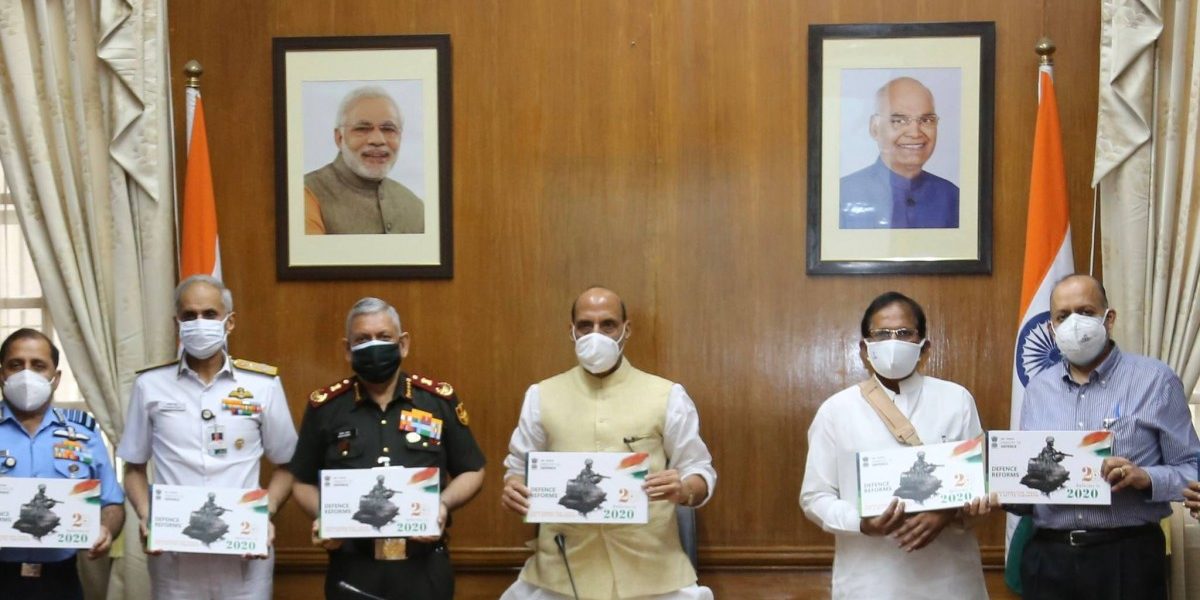 Exactly 46 years after then Prime Minister Indira Gandhi announced her 20-point programme during the Emergency she imposed in 1975, Indian defence minister Rajnath Singh proclaimed an analogous number of reforms his ministry had effected in 2020, which like the previous declarations, appear unconvincing and feeble.

Releasing the e-booklet on June 7 that provided an overview of 20 reforms undertaken by his Ministry of Defence (MoD), Singh declared that these would make India a future ‘global powerhouse’ in materiel development and manufacturing. In a flashback reminiscent of Gandhi’s reform programme, Singh stated that the booklet reflected the government’s resolve “under the able leadership of PM Narendra Modi, to make the defence sector stronger and more efficient”, as India progressed rapidly towards self-reliance in its military equipment needs.

On closer scrutiny, however, the MoD’s catalogue of reforms is at best questionable and at worst, repetitive, in what many military officers said was little more than a ‘feel good’ document. “The e-booklet list has little to do with reality on the ground,” said Brigadier Rahul Bhonsle (retired) of the New Delhi-based Security Risks consultancy group. “Other than a couple of features, it’s merely a laundry list of questionable attainments and aspirations.”

Shorn of rhetoric, this booklet provides little or no insight into India’s defence capabilities, but tediously catalogues amended rules, regulations and procedures to improve and simplify inter- and intra-departmental functioning. One two-star Indian Navy (IN ) officer said it was just a “bureaucratic exercise which hardly detailed the MoD’s achievements”. At best, he declared, declining to be named, it specified administrative reforms that were aimed at shaping a more efficient MoD in the future. Projecting them as stand-alone triumphs was simply disingenuous and a public relations endeavour, the officer dismissively added.

At the top of its achievement list the e-booklet registers the appointment, after over two decades of lobbying and urging by the military, of India’s first Chief of Defence Staff or CDS and concurrent head, in the rank of secretary, of the newly created Department Military Affairs or DMA. The CDS’s nomination and establishing the DMA, the document states, was envisaged to further jointness within the three services and foster civil-military ties by appointing 170 armed forces personnel to civilian posts.

The reality, 18 months later, is somewhat different – and neither joyous nor overly optimistic.

Murmurings are currently rife within the country’s defence establishment regarding the executive role and responsibilities of the CDS and the attendant DMA in the MoD’s overall architecture. After all, it is still the defence secretary who heads the Department of Defence or DoD and remains responsible for India’s defence and acts “conducive in times of war to its prosecution, and after its termination to effective demobilisation”. More importantly, the defence secretary is responsible for effecting capital materiel acquisitions, alongside minding other service matters. But there are rumblings within the DMA that this arrangement could imminently change.

To make matters worse, policy differences had steadily emerged between the DoD and the DMA, with the latter overstepping its area of responsibility with regard to the recently announced list of 108 military platforms and related systems which are to be progressively sourced indigenously end-2021 onwards. In actuality, this list – a follow-on to the earlier one from August 2020 featuring 101 defence items – was the bailiwick of the Department of Defence Production that operates under the DoD, further highlighting the blurred lines of responsibility between the latter and the DMA.

This is a far cry from the “increased efficiency and co-ordination” attributed to the CDS and the DMA in Singh’s booklet.

It’s also surprising that the questionable decision to corporatise India’s 41 state-owned Ordnance Factory Board (OFB) units has been listed as an achievement, as this is far from achieving fruition, if at all.

Similar moves were earlier vociferously opposed by OFB trade unions, representing some 80,000 employees, forcing the MoD to defer all corporatisation moves. Moreover, proposed efforts to enhance OFB efficiency via corporatisation and augment its research and development capability would necessitate large investments, which remain elusive. And, under India’s current dire economic climate, further ravaged by the COVID-19 pandemic, funds to modernise the OFB were unlikely to be available for an extended period.

Evidently, none of these multiple complex aspects appear to have been considered when finance minister Nirmala Sitharaman announced the OFB’s corporatisation in May 2020. The strategic community of retired military officials and defence analysts, who applauded this decision, also seem to have collectively failed to realise that OFB corporatisation was neither a panacea nor a silver bullet to resolve problems besetting India’s defence production. Ironically, abiding shortcoming of cost overruns, delayed deadlines and questionable quality control of OFB products also besets the country’s nine Defence Public Sector Units or DPSUs, tasked with producing the bulk of locally sourced military platforms like fighters, helicopters, warships, submarines and other equipment.

The MoD’s booklet also talks misleadingly of a 10% increase in the annual defence outlay for fiscal year (FY) 2021-22, billing it as the highest in a decade. In truth, the total budget for the armed forces for this period was only Rs 3,266 crore more in real terms than the likely estimated expenditure for the previous year. The hike in the revenue and capital budgets were Rs 2,715 crore and Rs 551 crore respectively, over the previous fiscal, registering, a smidgen-like financial hike.

Expectedly, the booklet makes no mention of the Rs 77,182 crore gap between the requirement projected by the services for capital expenditure for force modernisation and equipment upgrades, and the actual allocation of Rs 124,203.75 crore in the annual budget in February.

There was also a grave divergence in revenue expenditure earmarked for salaries, operating expenses, fuel and acquiring assorted ordnance and supplies for FY21-22 than what the services demanded and what they eventually received. Instead of the Rs 249,955.01 crore they had asked for as their revenue outlay, the armed forces got Rs 201,657 crore or a deficit of Rs 48,298 crore. This shortfall and the attendant problems these deficiencies spawn, especially at a time when India faced an ongoing military threat from China along its disputed border in eastern Ladakh, finds no mention in the MoD’s booklet.

Also read: As Officers Secure Civilian Ranks in the DMA, the Military’s Goal of Assimilation Moves Ahead

As for the separate budgetary allocation of Rs 52,000 crore earmarked for domestic procurement under the much hyped Aatmanirbharta initiative featured in the booklet, it is unclear how much of this will actually be available to the services to expend. Rudimentary back-of-the-envelope calculations reveal that little money will be available for new buys, as payments for ‘committed liabilities’ or equipment previously acquired loom threateningly ahead. At a conservative estimate, for instance, around 90% of the Indian Air Force’s (IAF’s) capital allocation of Rs 77,140 crore for FY21-22 was pledged to past buys like fighters, transport aircraft and assorted helicopters, amongst other equipment, leaving scant money for fresh acquisitions and programmes.

At Number 17 in the booklet, the promulgation of a new offset policy in the Defence Acquisition Procedure-2020 or DAP-20 as an achievement, too is misleading. There is simply nothing new whatsoever in the offset change, except for rejigging the list of items eligible for discharging the obligation under this policy.

Number 19, meanwhile, records a phenomenal increase in defence exports from Rs 1,941 crore in 2014-15 to Rs 10,746 crore in 2018-19, before slumping to Rs 5,711 crore in FY20-21 due, in all likelihood, to the coronavirus pandemic. The document further states that India now exports materiel to 84 countries, without detailing what products are being sold overseas and to who.

Industry sources, however, claim that this hike is greatly augmented by exports by private sector vendors and not exclusively by the DPSUs and the OFB as the document claims. In what industry officials aver to be an instance of ‘clever accounting’, the items produced by the government-owned entities are simply clubbed together with products exported by private vendors, something which was not being done earlier.

In March 2014, weeks before the Congress party-led United Progressive Alliance administration was voted out in general elections, the MoD had released a special 26-page document lauding the achievements of former defence minister A.K. Antony.

Entitled ‘Shri A K Antony as Defence Minister-A Look Back’, the narcissistic document celebrated the minister’s longevity in office and feted him as independent India’s longest-serving defence minister having assumed charge in October 2006.

But it conveniently omitted to mention the five-year delay and the almost three-fold escalation in the carrier’s refurbishment costs and its attendant MIG-29K air arm, to $2.3 billion. And like Singh’s e-booklet, it ignored vital shortages like conventional diesel-electric submarines, artillery systems, carbines and assault rifles, night fighting capability for tanks and varied ordnance, that persist even today.

It also failed, like Singh’s e-booklet, to reveal that the bulk of the FY 2014-15 defence budget would go towards paying for all the imported materiel, leaving trifling amounts for India’s much-deferred military modernisation.

The MoD, it seems, remains a serial propagandist.