The minister performed a brief Shastra Puja on the new aircraft as he emblazoned it with an 'Om' tilak. 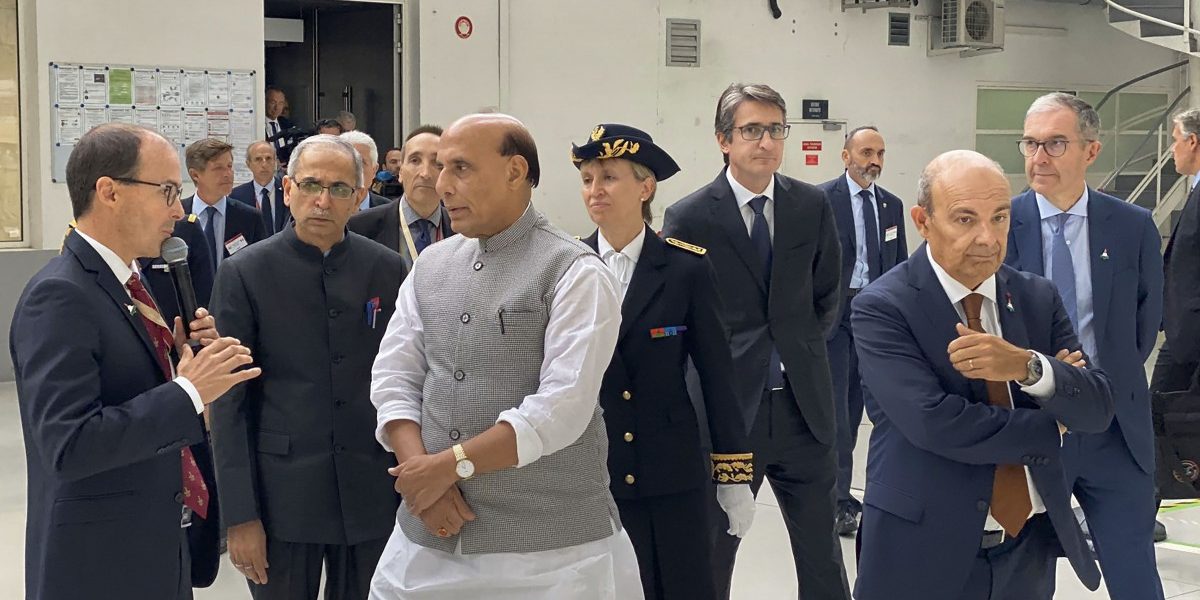 PTI
Government
Security
08/Oct/2019
Merignac (France): Defence Minister Rajnath Singh on Tuesday formally received the Indian Air Force’s first Rafale fighter jet from a series of 36 such aircraft purchased from France.Singh attended the handover ceremony along with his French counterpart Florence Parly at aircraft maker Dassault Aviation facility in Merignac, southwestern France.The minister performed a brief Shastra Puja on the new aircraft as he emblazoned it with an ‘Om’ tilak and laid flowers and a coconut, just before he was to take off in it for a sortie. He was joined by senior representatives of the Indian Armed Forces to mark the induction ceremony.
Also read: As Rajnath Singh Receives First Rafale Aircraft, a Look Back at the Questions Surrounding the Deal

“Our Air Force is the fourth-largest in the world and I believe that the Rafale Medium Multi-Role Combat Aircraft will make us even stronger and will give a boost to India’s air dominance exponentially to ensure peace and security in the region,” Singh said, addressing the gathering in Hindi.”I have been told that the French word Rafale means andhi in Hindi or gust of wind. I am sure that the aircraft will live up to its name, he said.

The RB001 Rafale, denoting the initials of Air Chief Marshal Rakesh Bhadauria who played a key role in striking the deal for the jets in his previous role as IAF deputy chief, was unveiled just moments ago behind him, with the Indian tricolour as its backdrop.

“Today marks a new milestone in the Indo-French strategic partnership and indeed a new high in the bilateral defence cooperation. Such achievements encourage us to do more and that will be on my agenda when I meet minister Parly today,” Singh said, in reference to the annual Indo-French Defence Dialgoue scheduled for later on Tuesday in Paris.

“This is a historic and landmark day for the Indian Armed forces, which reflects the depth of strategic partnership between India and France. Today marks Vijayadashami the victory of good over evil as also the 87th Indian Air Force Day. And therefore a symbolic day in so many ways,” he added.

Parly described the Rafale as a symbol of the best France has to offer India to protect its sovereignty and also of the French commitment to the ‘Make in India’ initiative.

“It is no coincidence that this ceremony falls on Dussehra and also the Indian Air Force’s 87th anniversary. It is a reflection of the paramount importance we give to our cooperation with India, said Parly.

“This is just the first step of a long journey, as we are committed to meet all needs of the Indian Army. It marks a big day in the history of our industrial cooperation and we remain fully committed to the Make in India initiative, she said.

This range of Rafale fighter jets have been specially designed to meet the needs of the IAF, which its manufacturer described as a new step in the company’s long-standing relationship with India.

“The history of our relationship started in 1953 with delivery of Toofani for the Indian Air Force and since then we have had a continuous and unfailing commitment to this country, supported by successive French governments,” said Eric Trappier, CEO of Dassault Aviation.

“These aircraft, which are on course to be delivered on scheduled as per the agreement signed in September 2016, have been created to meet the highly demanding needs of the Indian Air Force, which operates in a very sensitive geopolitical environment,” he said.

It was revealed that an Indian Rafale project monitoring team has been based in France since August 2017 to ensure the smooth implementation of the project, aimed at considerably enhancing India’s air combat fleet.

In Bordeaux, Singh began with a tour of Dassault Aviation’s final Rafale assembly line before the induction ceremony, which concluded with the Shastra Puja. He was then prepped for a sortie in the newly-acquired two-seater jet.

“It is indeed a great honour to be able to fly in this new fighter jet,” said Singh, just before take off.

The minister was accompanied by Armed Forces personnel including Air Marshall Harjit Singh Arora. Representatives of the top military brass from the French side were also present on the occasion.

While the formal handover ceremony takes place this week, the first batch of four Rafale jets will fly to their home base in India by May 2020. All 36 jets are expected to arrive in India by September 2022, for which the IAF has been reportedly undertaking preparations, including readying required infrastructure and training of pilots.

The Rafale is a twin-jet fighter aircraft able to operate from both an aircraft carrier and a shore base. The manufacturers describe it as a fully versatile aircraft which can carry out all combat aviation missions to achieve air superiority and air defence, close air support, in-depth strikes, reconnaissance, anti-ship strikes and nuclear deterrence.