Government school teachers have been warned they would face repercussions if they share humorous social media posts about the Annapurna milk distribution scheme launched on July 2.

It definitely can in Rajasthan’s Bundi district, where an order has been issued to government school teachers, warning them against circulating any tongue-in-cheek posts about the recently launched and much-hyped Annapurna Milk Scheme.

After the scheme was launched on July 2, texts, WhatsApp videos and Facebook posts surfaced mocking it. One of the videos shows two students wrestling, with the commentary attributing their strength to milk. Another discusses who gets to eat the malai (cream) after distribution of milk. Some speculate that the government’s future plans included providing buffaloes and cows to schools, with teachers then having to milk them. Or that anybody with a vessel, utensil or ladle in hand may not be a cook, but a teacher.

These posts were shared amongst the teachers through their Whatsapp and Facebook accounts and groups, mainly in Rajasthan’s Hadoti region comprising Bundi, Kota, Baran and Jhalawar districts.

Following the order, the mocking posts seem to have stopped circulating. Did sense suddenly prevail over the teachers or whether they fear disciplinary action against them is anybody’s guess.

Perhaps the posts made officials a bit jittery, who did not want to take any chances regarding chief minister Vasundhara Raje’s ambitious scheme, which provides milk thrice a week to 62 lakh children studying in state-run schools and madrasas.

“I am also a mother and know the happiness of seeing kids growing up to be healthy,” Raje had said while launching the scheme near Jaipur. The scheme aims to counter malnourishment amongst children, while also trying to increase enrolment in schools and arrest the dropout rate. 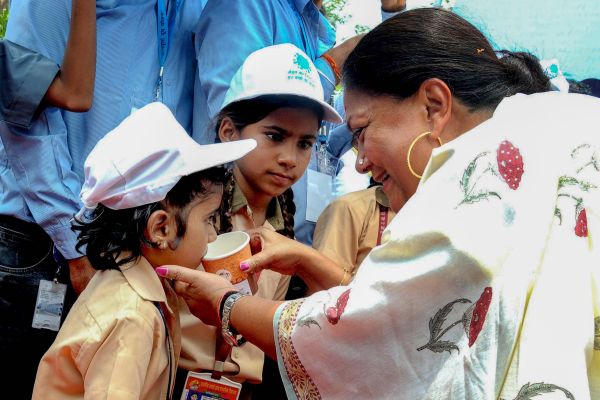 About 66,506 government schools will be provided warm milk as part of the mid-day meal. Students up to Class V will get 150 ml of warm milk thrice a week, while those in Classes VI-VIII will get 200 ml. With a budget of Rs 218 crore, nearly five lakh litres of milk would be served everyday. The scheme mandates that a teacher and a parent should taste the milk before it is distributed to ensure quality.

Bundi, where the notice against lampooning the scheme has been issued, has around 255 secondary schools and over 900 elementary schools.

Government school teachers, who are already burdened with many tasks, now have to oversee distribution of milk too. But most teachers have gladly taken on the added responsibility, saying the scheme would be a boon for children who come from below poverty line (BPL) families.

Basant Jindal, senior vice-president of Rajasthan Rajya Karamchari Mahasangh told The Wire, “Teachers do not have problem with distributing milk. It is a good step. What bothers them is that many of their existing problems are unheard or are not taken seriously.”

The humorous posts were only ‘banter’ to break the errands and mundane routine that have been added to their primary responsibility of teaching, the teachers say.

With elections just four months away, government officials did not want to risk the wrath of political bosses and were not amused by the sardonic posts. A gag order was put in place and has had its effect.

She confirmed to The Wire that the order was issued to bar teachers from spreading ‘unnecessary’ jokes and satirical comments on a scheme that is beneficial for students. She said, “The scheme should be welcomed. There is no need to spread jokes through social media, which may just dent the scheme.”

Kanwar said that only teachers who were not sincere about their work felt overburdened by the responsibility of distributing milk. “But anybody with a positive sense of approach, would not mind doing it. There are many who do it on their own. The order is a warning to stop spreading malicious jokes. The district collector did not find them in good taste and asked us to issue the order.”

Interestingly, Bundi’s district collector Mahesh Chandra Sharma denied he had asked for an order to be issued. He told The Wire, “These are issues dealt by education officers and such disciplinary orders are issued intermittently. But I think it is only an advisory guideline for government teachers.”

Under the Prime Ministership of Narendra Modi, bureaucrats and officials have to be careful about their social media posts. Recently, the Jammu and Kashmir government initiated disciplinary action against IAS officer Shah Faesal for his sarcastic tweet against rape-culture in South Asia.

Earlier, chief minister Raje had tried to table the draconian Criminal Laws (Rajasthan Amendment Bill) in October 2017. The Bill was first promulgated as an ordinance in September 2017 and was kept under wraps. It had sought to protect public servants from allegations arising out of possible vested interests, restraining the media from reporting any possible allegations made against such officers. Any journalist breaking the rule was likely to face two-year jail term.

Not only was it an attempt to stop public interest reporting, but the Bill subverted freedom of press enshrined in Article 19 (1) (a) of the Constitution.

After widespread criticism and protests, the government later withdrew the Bill.

It now looks like the Rajasthan government is taking a cue from West Bengal chief minister Mamata Banerjee.

In April 2012, Jadavpur University professor Ambikesh Mahapatra and his neighbour Subrata Sengupta were arrested for a day for forwarding a cartoon lampooning the chief minister. Banerjee had said the circulation of an email lampooning her amounted to “character assassination” and that it could not be termed as a cartoon.

In the same way, is humour being sucked out of teachers’ lives in the name of discipline, control and self-restraint?