An ordinance last month makes government permission mandatory before the police can even investigate – and the media can report – allegations against a public servant. 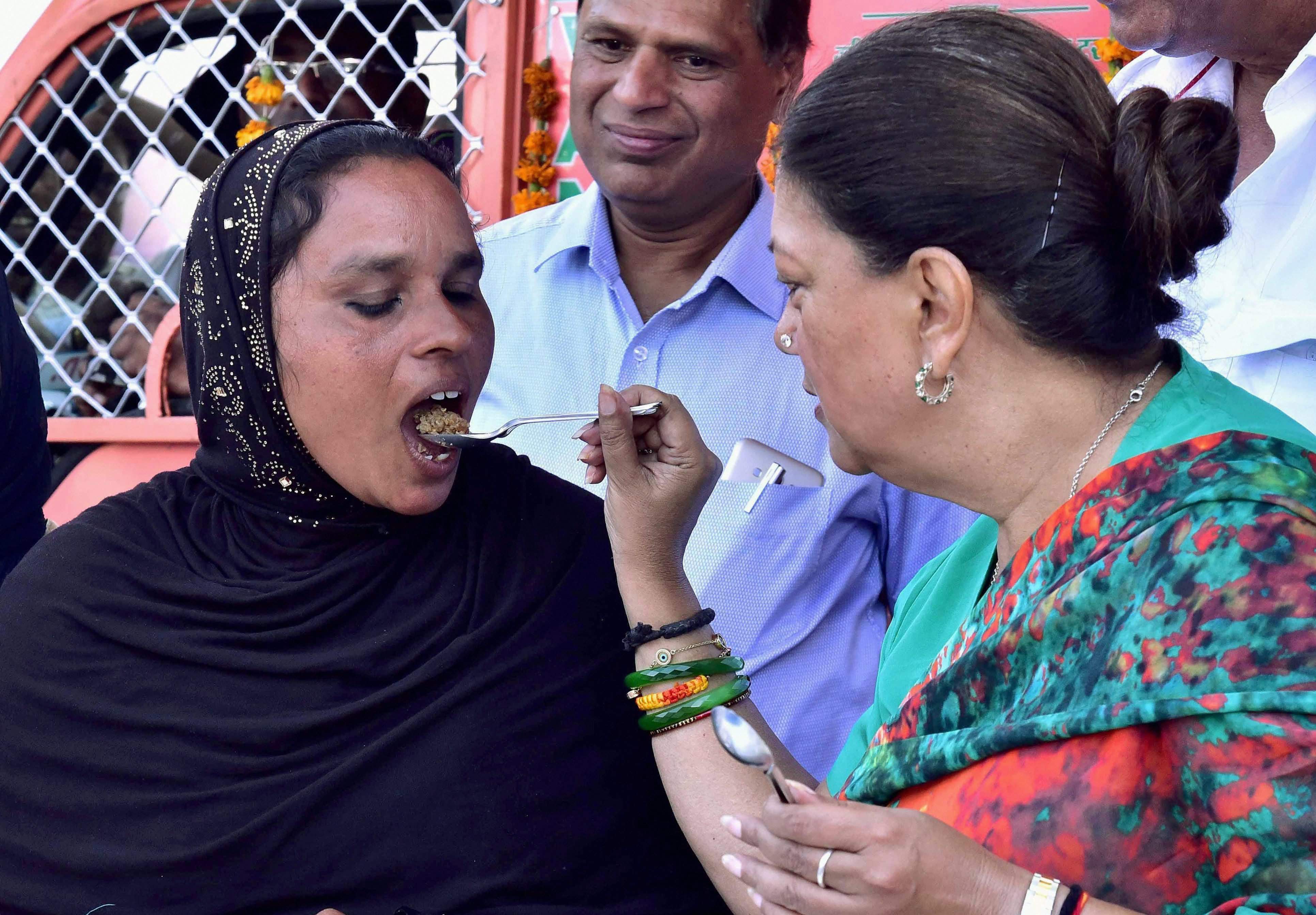 A bitter pill for the media, and justice: File photo of Rajasthan chief minister Vasundhara Raje in Beawar, Rajasthan on Monday. Credit: PTI

New Delhi: As if the murder of journalists and attempts to silence and intimidate media houses from reporting the facts about the ruling party and the government by slapping multi-crore defamation cases were not bad enough comes a fresh jolt to press freedom – an ordinance brought by the Vasundhara Raje government to stop the media from reporting on corruption charges against public servants, magistrates and judges.

On Saturday, news emerged of the BJP government in the state having brought in an ordinance –  the Criminal Laws (Rajasthan Amendment) Ordinance 2017 – that is unprecedented in the kind of restrictions it seeks to impose on the media. The ordinance was promulgated on September 6 but was kept under wraps until now, when the government went public with its intention of enacting the measure as a state law.

According to the Indian Express, the state government will table the Code of Criminal Procedure (Rajasthan Amendment) Bill on the opening day of the assembly session on October 23.

Public servants, judges and magistrates all across India already enjoy immunity from prosecution without prior government permission under Section 197 of the Code of Criminal Procedure (CrPC). The Rajasthan ordinance adds two further levels of impunity – no investigation can be ordered by the police under Section 156 or a magistrate under Section 190 into allegations against public servants, judges and magistrates, nor can journalists report on those allegations, unless the government grants sanction to prosecute.

If the Bill is passed by the state assembly – a likely outcome since the ruling BJP has 162 of the 200 seats – journalists would be barred from reporting any accusation against serving bureaucrats, and serving or retired judges and magistrates for any “act done by them while acting or purporting to act in the discharge of their official duties” unless the state government has itelf sanctioned a probe into the charge. Any journalist breaking the rule is likely to face a two-year jail term.

The sanctioning authority may take up to six months to decide on a go-ahead for a probe into an allegation and if it exceeds the time limit, permission would be deemed as given. However, the law will not require the government to state its reasons for taking a decision on whether to allow a probe or not.

Speaking to The Wire from Jaipur, journalist Jagdish Sharma of the Rajasthan Working Journalists Union (RWJU) said, “As of now, we have only seen a small report about it in Rajasthan. If the state government tries any such attempt to gag the media, we will protest. It is our constitutional right and no government can tell the media what to do and what not to. We will certainly protest it. It is also an attempt to stop investigative reporting.”

At a press conference organised in Jaipur on October 21 to oppose the ordinance, the Rajasthan wing of the Peoples Union for Civil Liberties demanded that the state government repeal the ordinance and not place it in the assembly. PUCL state president Kavita Srivastava also said her organisation would approach the Rajasthan high court “at the earliest” against the move.

“The menacing import is very clear: to silence the media and to prevent the judiciary from exercising its judicial function of setting the criminal law in motion. In effect, what the government cannot do by moving a Constitutional amendment to abridge the fundamental right of speech and expression the government is doing by the back door to make it impossible for people to seek justice against corrupt public servants,” the PUCL press statement said.

As news of the law spread outside the state, it created a buzz on social media. Senior journalists and editors took to Twitter to condemn the purported attempt of the Rajasthan government to gag media.

Hartosh Bal, political editor of The Caravan, said: “No w/o without prior sanction is bad enough but this forbids media from reporting on the accused till such sanction!”

Well-known journalist and former editor of Mahanagar Nikhil Wagle tweeted: “Netao-offsaro ko bachayega rajasthan sarkar ka naya bill, aasan nehi hoga shikayat darz karna” (The new Bill of the Rajasthan Government will save politicians and officials; it won’t be easy to file a complaint against them.”

Shekhar Gupta, former editor of the Indian Express and now of the news portal The Print, tweeted, “Wake up India. While you have been chilling over the long Diwali weekend, Rajasthan’s ordinance proclaims itself new Republic of North Korea.”

He also wrote, “Think: in the new Republic of North Korea (formerly Rajasthan) media must take govt’s sanction before publishing any expose against it.”

That Rajasthan’s ordinance could be “a model” for other state governments to protect themselves from allegations of corruption and reporting about them by the media is a worry shared by some.

Constitutional expert P.D.T. Achary told The Wire, “From what I could gather from media reports leads me to object to the proposed legislation on two aspects, one of which is unacceptable in a democracy at any cost. It is the attempt to put an embargo on the media and I would call it unconstitutional.”

“Press freedom”, he underlined, “is granted under section 19(1) A of the constitution which deals with freedom of speech and expression. Any government which tries to bring such a law will, therefore, go against the basic tenets of the constitution.”

Achary, a former secretary general of the Lok Sabha, also noted that the proposed legislation and ordinance go against the provisions set under the CrPC “by undermining the power of the judiciary.”

“This will come into the domain of the courts. As per CrPC section 190 (1), a magistrate or a judge can take suo motu cognisance of an allegation or offence against anyone including a public servant. So this proposed legislation is also an attempt to curb the powers of the magistrate or a judge given under the CrPC. Also, Section 197 of CRPC anyway deals in detail about prosecution of a judge, magistrate or public servant accused of any offence. It talks of the need for prior permission in some cases. So this ordinance and the Bill looks more like an attempt by the government to shield certain public servants and bar the media from questioning them and thereby the ruling dispensation.”

“That some netas and babus in that state thought that they can bring in such a law or ordinance and get away with it says a lot about the times that we are in. Say, ten years ago, one couldn’t think of such an authoritarian mindset. The Vajpayee government couldn’t think of bringing such a law but it is happening now,” said Yogendra Yadav of Swaraj Abhiyan.

One nation, many criminal laws

Achary also pointed out what he said was a constitutional flaw: “The Indian Penal Code (IPC) and CrPC deal with the substantive criminal law of the country. Unfortunately, the constitution puts the IPC not under the Union list but under the concurrent list. So a state government can also enact a criminal law, like the Central government. Ideally, criminal law should be allowed to be made only by parliament as punishment for any criminal act should be the same across the entire country.”

He added, “However, a state government can’t overrule a law made by the Central government. In this case of the Rajasthan government, the Bill will affect many such laws.”

The amendments that the state government has tried to bring also goes against the five-judge constitutional bench of the Supreme Court in the Lalita Kumari vs State of UP (2014), which clarifies that if a complaint made against a public servant  makes out a ‘cognisible’ offence, an FIR has to be lodged and an investigation begun by the police.

The PUCL press note underlined the judgement, “In cases where the alleged offences are non-cognisable or are about corrupt acts, then the police officer or the investigating officer is empowered to initiate a preliminary inquiry into the complaint and in the event a prima facie case is made out, the police officer should place the complaint received and the report of the preliminary enquiry making out the prima facie case before the concerned court and seek directions to obtain sanction to prosecute under section 197 against the accused public servants.”