Punjab: Railways Blames Farmers for No Trains Even Though Agitation Has Been Moved

Farmers' organisations say the only rail tracks they are blocking at the moment belong to private power plants. 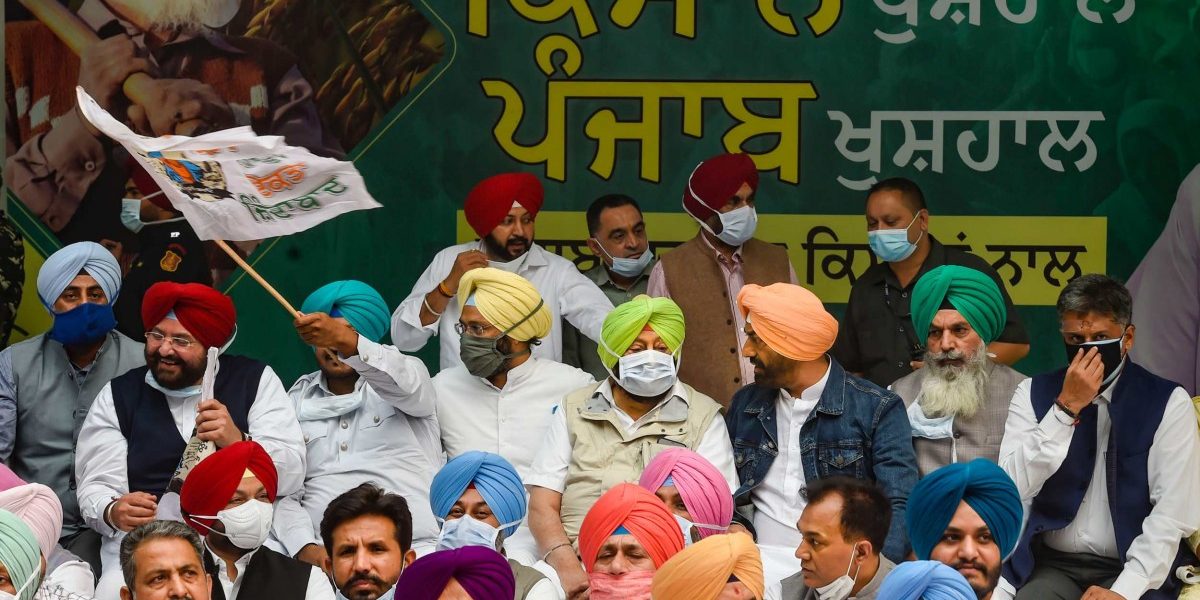 Mohali: A day after Punjab chief minister Amarinder Singh staged a sit-in protest in New Delhi to highlight the suspension of freight train movement into Punjab and the resulting shortage of essential goods in the state, the Northern Railways has issued a press note on November 5, saying that a group of leaders “representing Punjab” have “apprised” railway minister Piyush Goyal of the ongoing situation and requested him to restore train services in the state as soon as possible.

The press release also notes that the Ministry of Railways has asked the Punjab government to “get the rail track and railway properties cleared of the agitators” so that trains can start running.

However, the Punjab chief minister while addressing the protest dharna on November 4 in New Delhi, said that no farm union has occupied any rail track in protest anymore, except private power plants’ branch lines.

Rail tracks that are still blocked

“We (the 31 farmer organisations spearheading protests in Punjab) have blocked railway lines at only three places as of  now,” Darshan Pal of the Kisan Mazdoor Sangharsh Committee (KMSC) said. “All the three locations are branch lines of private companies.” This has been done to cut the supply of coal to private power plants, he added.

Farmers’ organisations in Punjab lifted their rail roko (occupy rail tracks) agitation officially on October 22. “Since then we have not been obstructing the movement of any goods or passenger trains into Punjab,” Pal said. “To continue our agitation, we have decided that protesting farmers shall occupy roads outside railway stations now.”

Jagmohan Singh of the Bhartiya Kisan Union (Dakaunda) said that farmers’ unions were told that for the train movement to continue, even platforms cannot be occupied. “So we have vacated the railway stations altogether,” he said.

Divisional railway manager, Ferozepur (Northern Railway), Rajesh Aggarwal was contacted by The Wire and asked why trains were not running when farmers had vacated the tracks, but he was reluctant to talk about the matter. He responded by saying that the information this correspondent seeks is available in a press note.

The press note, however, claims that it is the continued agitation of by farmers which is not letting the Ministry of Railways start operations.

Pal said that after October 22, for a day or two, more than 100 goods trains were allowed to enter Punjab but then abruptly stopped.

On the other hand, as reported in The Indian Express, the railways claim that on October 22 and 23 an empty passenger  train was stopped by farmers, after which the Railways issued directions to stop movement of goods trains to Punjab.

Farmers’ unions first occupied rail tracks from September 24 onwards. At the time, only the movement of passenger trains was stopped. Goods trains were running at night. From October 1 onwards, when the farm agitation was intensified, movements of all trains stopped. However, from October 13 onwards, in phases, this blockade of freight trains was lifted.

Mounting losses for both the Railways and Punjab

On November 4, the general manager of Northern Railway, Ashutosh Gangal said that the Northern Railway has suffered a loss of Rs 1,200 crore till November 3 because of the farmers’ agitation.

“Thirty-three locomotives are also stuck at different locations in Punjab. The farmers’ agitation is severely affecting the supply of coal to power plants and food grain to the rest of the country as well as fertiliser, POL and containers,” he added.

On the same day, from New Delhi, Punjab chief minister Amarinder Singh also said that Punjab was facing a shortage of coal for its power plants, fertilisers and packaging material for its food grains. He also said that along with Punjab, the supply of essentials is impacting Himachal Pradesh, Jammu and Kashmir, and the troops stationed in Ladakh too.

In addition, the suspension of goods trains has resulted in a complete shut-down of all power plants in the state.

Since the first week of  October, the government of Punjab had been requesting farmers’ organisations to ease the blockade. On October 6, the chief minister had pointed out that due to the prolonged blockade of goods trains, the situation at Punjab’s coal plants is critical and they are left with only five to six days’ supply of coal.

“At the time, we did not listen to the government. We wanted to continue our agitation, but after that on October  20, when the Punjab assembly passed the three new farm bills to counter Centre’s laws, we decided to call-off our agitation on the rail tracks,” said Pal.

As of now, both the railways and the Punjab government are facing losses. Other than this, the supply of certain essential agriculture inputs which the farmers need has also been hit.

On the one hand, farmers say that they have cleared the way for the passage of trains but the government claims they cannot resume operations because of the continuing blockade.