Punjab: V-C Resigns After Minister 'Forces' Him to Lie on Dirty Mattress During Inspection 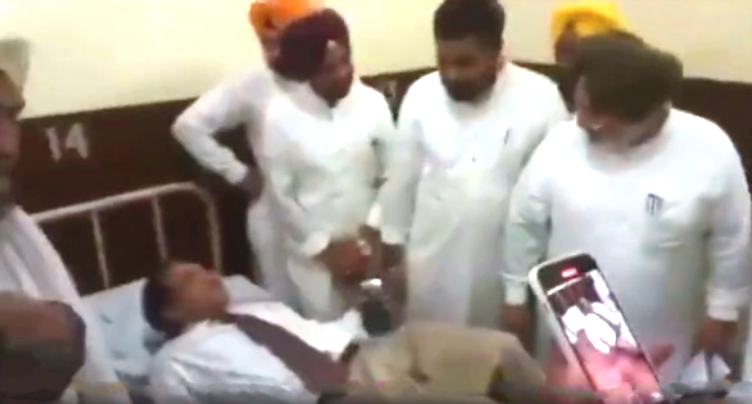 New Delhi: The vice-chancellor of a medical college in Punjab has resigned after state health minister allegedly forced him to lie on a dirty mattress at a hospital.

Dr Raj Bahadur, the vice-chancellor of Baba Farid University of Health Sciences (BFUHS) in the state’s Faridkot district, submitted his resignation to the Chief Minister’s Office late on the night of Friday, July 29.

Hours earlier state health minister Chetan Singh Jouramajra had asked him to lie down on a dirty mattress during an inspection of Faridkot’s Guru Gobind Singh Medical College and Hospital, which comes under the BFUHS.

A video clip of the incident that circulated on the social media, showed Jouramajra place a hand on the veteran surgeon’s shoulder as he pointed towards the “damaged and dirty condition” of the mattress inside the hospital’s skin department.

The minister then allegedly forced Bahadur to lie down on the same mattress.

Though the vice-chancellor himself did not confirm his resignation, highly placed sources in the health department confirmed the same to multiple outlets. When approached for comments, The Tribune reports that Bahadur said, “I have expressed my anguish to the Chief Minister and said I felt humiliated.”

Reports have it that chief minister Bhagwant Mann has expressed his displeasure over the incident and spoken to Jouramajra. Mann has also asked Bahadur to meet him next week.

Speaking to The Indian Express, Bahadur additionally said: “I have worked in 12-13 hospitals so far but have never faced such behaviour from anyone till now. I shouldn’t have been treated this way… it affects this noble profession. It is very painful. He showed his temperament, I showed my humility.”

Bahadur is a specialist in spinal surgery and joint replacement and a former director-principal of Government Medical College and Hospital in Chandigarh. He has also been the head of the orthopaedic department at PGIMER, Chandigarh.

Asked whether new mattresses had been ordered for the hospital, he said: “Two firms sent their quotations and the rate finalisation needs to be done. It is a 1,100-bed hospital and not all mattresses are in bad condition. This mattress shouldn’t have been there but hospital management is the prerogative of the Medical Superintendent.”

Speaking to reporters at the hospital, Jouramajra said: “My intention was not to do any inspection. In fact, I am visiting various hospitals to see what the requirements are so that we can fulfil them.”

Various quarters, including the Indian Medical Association, have criticised Jouramajra.

PCMS Association, a doctors’ body in Punjab, to,  in a statement, strongly condemned the “unceremonious treatment” meted out to Bahadur. PCMSA said the way the V-C was treated was “deplorable”, its reason notwithstanding.

The body expressed its “deep resentment” over the incident and said “public shaming of a senior doctor on systemic issues is strongly condemnable.”

Opposition parties also hit out at the AAP dispensation over the incident.

I couldn't see eye to eye with Dr Raj Bahadur Ji, as there was helplessness in his eyes. It was not he who felt insulted and humiliated, but all of us together. Entire Punjab stands in solidarity with you, Sir. pic.twitter.com/CxPY2aU4Jp

“The sort of behaviour meted by the Health Minister to VC Baba Farid Medical University Dr. Raj Bahadur is absolutely uncalled for. @BhagwantMann ji should take strict action against the arrogant Minister, senior Congress leader and Leader of the Opposition, Partap Singh Bajwa said in a tweet.

“Otherwise such behaviour will alienate our medical fraternity,” he continued in the same tweet.

“Have spoken to Dr Bahadur & expressed solidarity with him besides assuring full support to entire med fraternity which is being targeted by AAP ministers & MLAs,” Badal said in a tweet.

“Very sad that Dr Raj Bhadur (sic) has resigned, but he has done what any self respecting person would do, Jakhar said in a tweet.

Now it’s for @BhagwantMann to do what any conscientious CM ought to do-sack the health minister, if that’s what it takes to prevail upon Dr Raj Bhadur (sic) to withdraw his resignation, he wrote.

Both sent their resignation letters on Friday, following the incident at Guru Gobind Singh Medical College and Hospital.