On January 5, PM Modi’s Ferozepur rally in Punjab had to be cancelled as he was stuck on a flyover for 15-20 minutes as the road ahead was blocked by protesters. 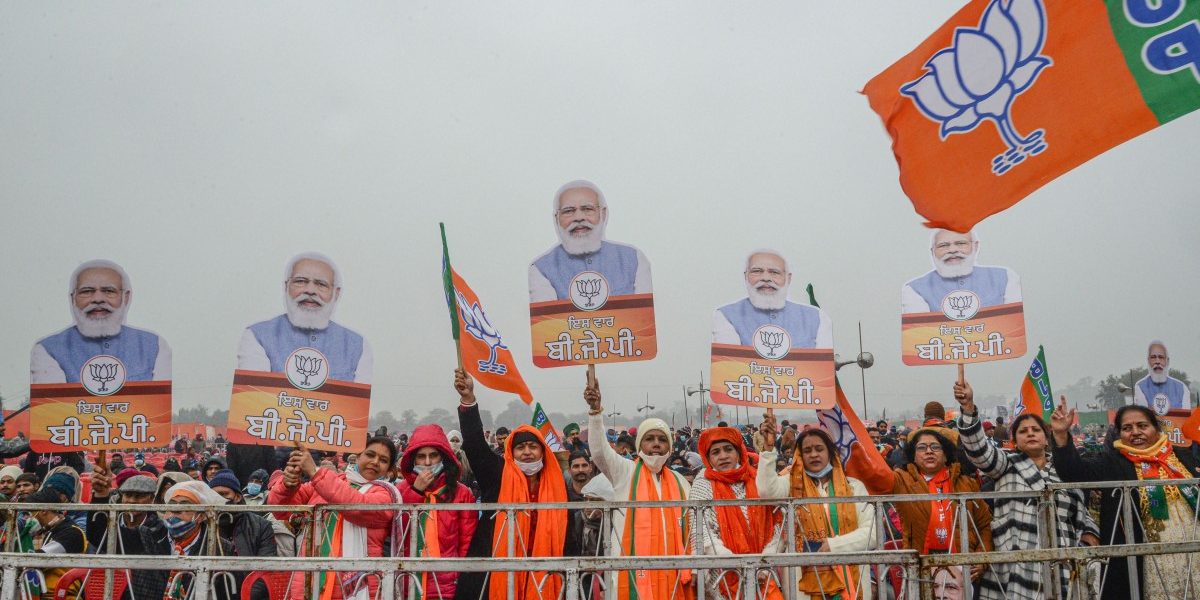 BJP supporters hold posters of Prime Minister Narendra Modi as they wait at the venue of PMs rally after it was canceled, amid rain in Ferozepur, Wednesday, Jan. 5, 2022. Photo: PTI

Jalandhar: A day after Prime Minister Narendra Modi’s alleged security breach at the Ferozepur rally, the poll-bound state witnessed the targeting of Punjabis, especially Sikhs, with ‘Repeat of 1984’ threats by right-wing supporters on social media.

On January 5, Prime Minister Modi’s Ferozepur rally in Punjab had to be cancelled as he was stuck on a flyover for 15-20 minutes as the road ahead was blocked by protesters.

After landing at Bathinda’s Bhisiana airport, Modi was on his way to the National Martyrs Memorial at the Hussainiwala border – where he was planned to reach by helicopter but took the road due to bad weather. The incident took place on his way to the memorial.

Modi’s rally at Ferozepur was significant for two reasons: first, it was his maiden rally after repealing the three farm laws and second, that Punjab was all set to go for polls in February.

Threats of 1984 on social media

Before Prime Minister Modi’s rally, #GobackModi was trending on Twitter. Later, after the ‘security breach’ and the prime minister’s alleged “thankful I could return alive” remark to airport officials, tweets threatening a repeat of the 1984 anti-Sikh pogrom started appearing online.

“If even a scratch would have come to @narendramodi ji, then you must understand @rahulgandhi what could have happened…? 1984 would be dwarfed in all memories, be aware clearly. Modi ji is the head of a family of 130 crore Indians,” wrote Sushil Kedia, a Twitter user. Kedia later claimed that he was not referring to the anti-Sikh violence, but the assassination of Indira Gandhi. 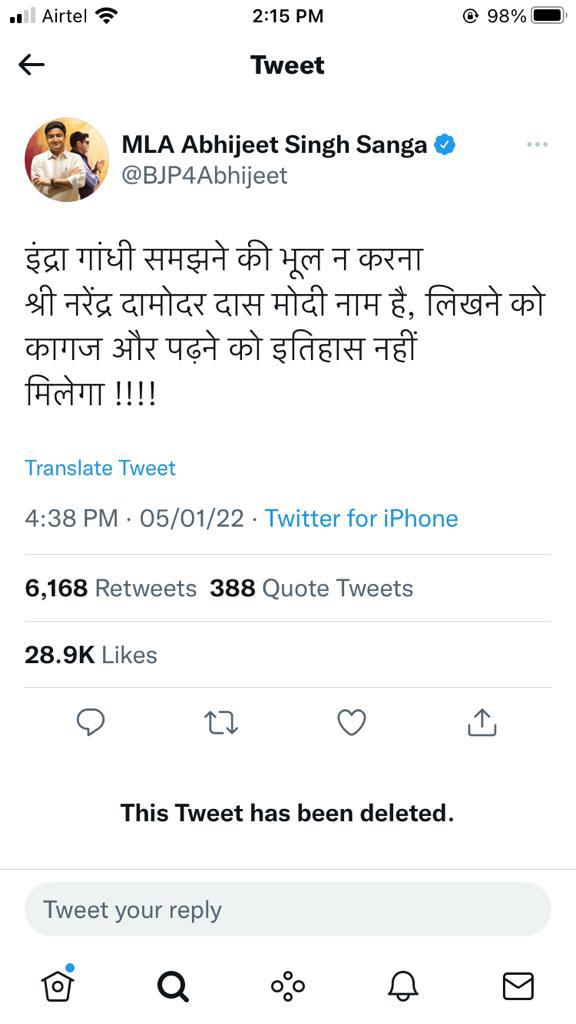 Senior journalist and author Jagtar Singh shared Sanga’s tweet, saying, “How come that threat by BJP linked handles to repeat Nov 1984 is not being condemned by senior ⁦@BJP4India leaders?”

#ModiVisit How come that threat by BJP linked handles to repeat Nov 1984 is not being condemned by senior ⁦@BJP4India⁩ leaders? pic.twitter.com/2X5vZHYzrW

Commenting on the threats on social media, former professor of sociology from Panjab University, Chandigarh, Manjeet Singh, said, “Dubbing the prime minister’s security lapse as ‘Repeat of 1984’, talking about slain prime minister Indira Gandhi and targeting Punjabis will amount to aggravating the political situation in Punjab, which is quite disillusioned at the moment.”

He also termed Modi’s “thankful I could return alive” remark at Bathinda airport as “highly provocative”.

“People will never forget that how instead of having a dialogue with the farmers and expressing respect towards them, the prime minister had termed them as andolanjivis and parjivisis, which was derogatory. Even though the farm laws have been repealed, political awareness unleased by the farmers’ protest is still providing a groundswell in Punjab. That is the reason why farmers and people in Punjab wanted to give an answer to Modi,” he said.

Akal Takht jathedar Giani Harpreet Singh issued a video message on Twitter, asking the BJP leadership to take action against ‘hate terrorism’ against Sikhs on social media, even from the handles of prominent party members.

Jathedar of Sri Akal Takht Sahib call on @mygovindia @PMOIndia @narendramodi @HMOIndia @AmitShah to take action against 'hate terrorism' against #Sikhs on social media even from prominent handles by registering sedition cases against them, following recent incidents in #Punjab. pic.twitter.com/J7BGL2Y4s2

Notably, last week BJP Punjab president Ashwani Sharma had claimed in a press conference that this would be the biggest rally ever in the history of Punjab.

For the last one week, BJP workers had been issuing press notes stating that around five lakh people would be attending the rally, whereas roughly some 5,000 people showed up, turning the rally into a damp squib. The BJP had arranged 3,485 buses and 5,000 other vehicles to ferry people from different areas.

BJP workers also claimed that their buses ferrying party supporters were stopped at Kathu Nangal near Gurdaspur, Harike and Talwandi in Ferozepur and Kotkapura in Faridkot district.

A video that went viral on social media showed buses being stopped at Kathu Nangal near Gurdaspur district. BJP supporters also had a verbal spat with the agitating farmers, after which they were allowed to move.

Modi’s Firozepur rally was totally empty; reason was bad weather and protests. This flop rally made him go back. Close to 100 buses stopped by protestors at a toll plaza, were coming from Jammu filled with BJP supporters. @ravishndtv @ZeeNewsEnglish @aajtak @TOIIndiaNews pic.twitter.com/HALb6uRXhU

Patiala-based Gurshamshir Singh, who attended the BJP’s rally at Ferozepur, said that right from the beginning till the end, the venue was never filled to its capacity. “Initially people were coming but even then, the gathering was one-third of the entire seating arrangement. I met many outsiders, including a group of young boys, dressed up in traditional attire of ‘Dhoti-Kurta’ who claimed themselves to be from a Gurukul. People started leaving the venue when it started raining and finally the rally was called off. The rally simply failed.”

Surprisingly, Punjab Congress president Navjot Singh Sidhu remained silent on this entire issue on January 5. While addressing a rally at Dana Mandi, Barnala, on Thursday, he said, “The prime minister couldn’t have addressed empty chairs like shameless ex-chief minister Captain[Amarinder Singh]. Only way out was to divert media attention to alleged ‘security threat’ and save humiliation of addressing 500 people on 70,000 chairs. This is a colossal failure of the BJP in Punjab. They were like a burst balloon.”

Sidhu further said, “Farmers sat on protest at the Delhi borders for over a year, but [on January 5] when the prime minister had to wait for around 15 minutes, he was troubled by it. Why these double standards? Modi ji you had said that you will double farmers’ income but you even took away what they had.”