Opposition members carried pouches of milk and curd into the Lok Sabha and Rajya Sabha, demanding a discussion of the issue. 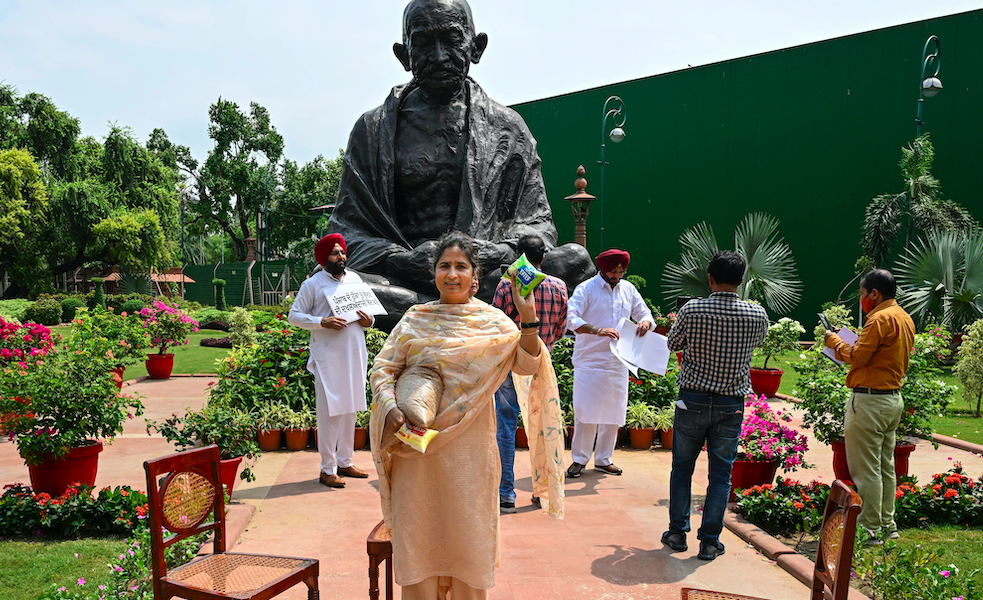 Opposition members during a protest against inflation and the Union Government's decision to increase GST on food items, near the Gandhi statue at Parliament complex, in New Delhi, Wednesday, July 20, 2022. Photo: PTI

New Delhi: Both the Lok Sabha and Rajya Sabha witnessed multiple adjournments on Wednesday, July 20, as the opposition members – for the third consecutive day – agitated demanding a discussion on price rise and the increase in Goods and Services Tax rates.

Apart from the protests inside the two Houses, opposition lawmakers also held protests in the near the Gandhi statues in Parliament complex.

Opposition protests GST imposition on items of daily use

Before the Houses assembled, opposition members gathered near Mahatma Gandhi’s statue and protested against the rising prices of essential commodities. After having held similar protests over the past two days, MPs brought packets of milk products – curd, milk and buttermilk – with them to highlight how the tax net has been cast wide to cover more items of daily use.

Apart from this, the protesters today also displayed cut-outs of gas cylinders with slogans and past and present rates on them to criticise the sharp increase in prices and higher GST rates.

They also held aloft placards which read “Gabbar Singh Tax strikes again” – a take on the GST acronym. Among prominent leaders who participated in these protests were Rahul Gandhi, Leader of Opposition in Rajya Sabha Mallikarjun Kharge and Leader of Congress in Lok Sabha Adhir Ranjan Chowdhury.

Later, when Lok Sabha and Rajya Sabha sessions took off, some of the opposition MPs carried the milk product packets inside the Houses too. Their anger was directed at the government’s decision to impose 5% GST on basic food items such as such as rice, flour, cereal and milk.

Finance minister Nirmala Sitharaman had earlier said that these items will not be taxed when sold loose but only when they are pre-packaged and pre-labelled.

In the Lok Sabha, as soon as the Question Hour began, opposition members pressed for the discussion on price rise. Speaker Om Birla said he would give them an opportunity during the Zero Hour and demanded that they raise the issues in discussions rather than through protests.

This evoked a strong response from Birla, who was heard saying, “Only if you go to your seats will you get the chance to speak”.

He also remarked, “The House is for discussion and raising issues, not for raising slogans and creating chaos”. Further, the Speaker insisted that the display of placards was “a violation of House rules” which hurts “Parliament’s prestige”.

The Speaker then told the MPs, “In ‘Amrit Kaal’, people expect meaningful discussion from us”. ‘Amrit Kaal’, which refers to a time of great success as per Vedic astrology, has been used by Prime Minister Narendra Modi and others in the Bharatiya Janata Party to indicate good governance.

Parliamentary Affairs Minister Pralhad Joshi said it was “not appropriate” for the members to continue with the protest when the Speaker has assured a discussion later. “Are the protesting members interested in discussions or not?” he asked.

Later as protests continued, Birla adjourned the House till 2 pm.

When the House re-assembled, P.V. Midhun Reddy was in the Chair and he took up matters under Rule 377. Amid loud sloganeering by opposition members, some members of the Treasury benches raised issues related to their constituencies.

The House was later adjourned till 4 pm by the Chair.

In the Rajya Sabha too, there were protests by opposition MPs on the issue of price rise and GST. When the House assembled in the morning, Chairman M. Venkaiah Naidu allowed Leader of the Opposition Kharge to briefly speak on the subject on which he and others had given a notice under Rule 267. Kharge then spoke about how the common man, and especially the poor, have been hit hard by rise in price of essential commodities.

Naidu then said the Business Advisory Committee (BAC) of the House has agreed to a discussion on price rise.

He said if the opposition was not interested in a discussion, then he would adjourn the proceedings. Opposition members demanded the rest of the items on the agenda be set aside and the discussion be taken up first.

“You cannot dictate to me,” Naidu said, and adjourned the proceedings.

Then when the House re-assembled, Deputy Chairman Harivansh called Congress member Shaktisinh Gohil to speak on the Weapons of Mass Destruction and their Delivery Systems (Prohibition of Unlawful Activities) Amendment Bill, 2022.

Before a reluctant Gohil could speak, member of various opposition parties, including the Congress, trooped into the Well and began raising slogans, holding aloft placards. The Chair urged them to return to their seats. He also urged Randeep Singh Surjewala of the Congress to not take pictures of the protests, saying this was against the rules.

As Union Minister Piyush Goyal stated that other MPs too were recording the proceedings, the protests continued. Gohil demanded that the House be brought to order before he speak. Harivansh first urged Biju Janata Dal member Prashanta to speak on the Bill, but soon after adjourned the House for the day.