Journalists, activists, writers, thinkers and women organisations were seen among the crowds that gathered in the city and across the state condemning the killing of the journalist. 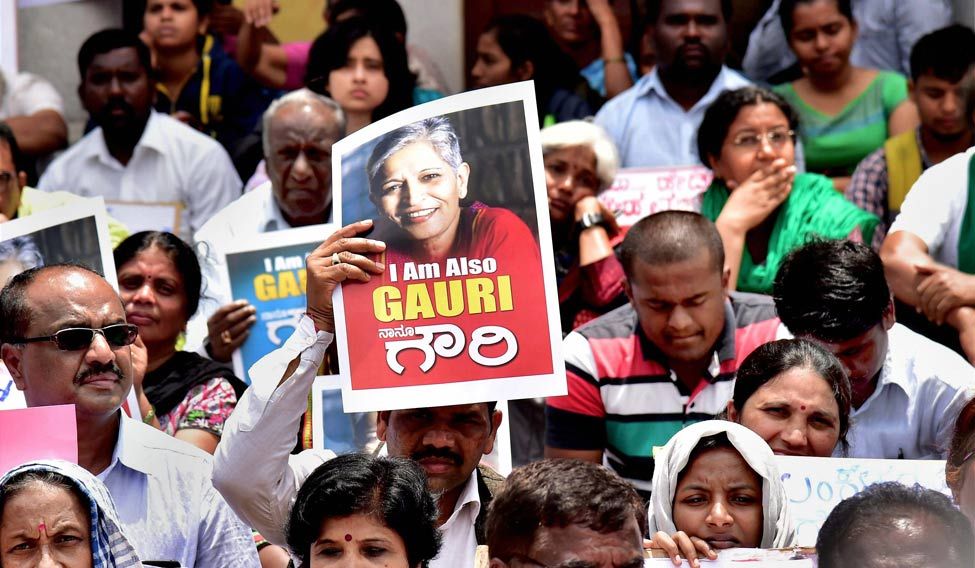 Citizens with posters and placards during a protest against the killing of journalist Gauri Lankesh, who was shot dead by motorcycle-borne assailants outside her residence last night, during a protest in Bengaluru on Wednesday. Credit: PTI

Bengaluru: Protests erupted across Karnataka on Wednesday morning condemning the dastardly killing of senior Kannada journalist Gauri Lankesh, who was shot dead at her residence on Tuesday night by three unidentified men.

Journalists, activists, writers, thinkers and women organisations were seen among the crowds that gathered in the city and across the state condemning the killing of the journalist.

People were seen gathered at the Town Hall for a silent protest, holding placards. “You can kill a person but not their ideas,” read one placard.

Silent demonstrations were also staged by journalist groups at the Victoria Hospital grounds, where the autopsy is being done.

Across the state, protests were witnessed – in Mangaluru, Kalaburagi, Dharwad, Koppal, among other regions – where citizens took to the streets.

Journalists in Mysuru, wearing black ribbons around their arms, also held a protest in front of the deputy commissioner’s office.

Massive protests have also been planned across the country in various cities like New Delhi, Mumbai, Hyderabad among others.

“CM has cancelled all engagements, including a day-long trip to Kerala in view of the developments since Tuesday night,” said an official from the chief minister’s office.

Congress president Sonia Gandhi also expressed shock and distress over the murder on Wednesday, saying “this can’t and should not be tolerated”.

Accusing the BJP of silencing dissent, Congress vice president Rahul Gandhi said it was a part of their ideology. “Anyone who speaks against BJP is silenced…” Rahul said on Wednesday.

Lankesh, 55, was shot dead by three unidentified men who had shot her when she returned home from her office in the city.

Lankesh was an editor of popular Kannada tabloid Lankesh Patrike.

In November 2016, Lankesh was sentenced to six months in jail after a defamation case was filed against her for a report against BJP leaders. She was out on bail pending an appeal.