Where Will the Political Will to Improve Healthcare Come From?

The political will of a government is intimately tied to the willingness and ability of citizens to take the government to task either by mobilising against it or by voting it out of power.

A woman carries her niece who got sick after consuming contaminated meals given to children at a school on Tuesday, in the eastern Indian city of Patna July 18, 2013. The Indian government announced on Thursday it would set up an inquiry into the quality of food given to school pupils in a nationwide free meal scheme after at least 23 children died in one of the deadliest outbreaks of mass poisoning in years. REUTERS/Adnan Abidi (INDIA - Tags: DISASTER HEALTH TPX IMAGES OF THE DAY EDUCATION SOCIETY) 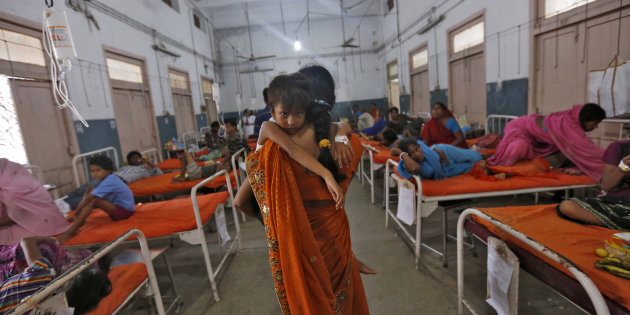 A woman carries her niece who got sick after consuming contaminated meals given to children at a school in Patna, 2013. Credit: Reuters/Adnan Abidi

Our health situation is downright depressing. We failed in our bid to reach the 2015 millennium development goal of achieving an IMR of 27, lagging behind at 41 deaths per 1,000 live births. As a result, we rank in the bottom quarter worldwide – 143rd among 188 countries – in terms of our overall sustainable development goal (SDG) health index. We are last among the BRICS, 60 ranks below Sri Lanka, and worse still, behind war-ravaged countries like Libya and Iraq, and even behind some of the poorest countries in the world such as Cambodia, Timor-Leste, and Myanmar.

Our health status is dismal in good part because some of the most populous states – including Uttar Pradesh and Bihar – still have health indicators well below the national average and even comparable to poor African countries. As a recent report noted:

Nine of India’s poorest states [Assam, Bihar, Chhattisgarh, Jharkhand, Madhya Pradesh, Odisha, Rajasthan, Uttarakhand and Uttar Pradesh] – home to 581 million or 48% of India’s population – account for 70% of the country’s infant deaths, 75% of under-five deaths and 62% of maternal deaths, but do not spend even the money they have set aside for healthcare.

In federal systems such as India’s, where health is primarily the responsibility of state governments, the blame must lie with them for the poor health of the nation especially since, quite remarkably, they do not bother to even spend the monies they have themselves earmarked for healthcare.

It is curious though that India’s citizens – the obvious direct victims of the poor state of health services – seem to be indifferent to the government’s callousness and failures. They do not seem much bothered at all that their governments are not even spending allocated amounts on health.

In a newspaper article written earlier this year, Vikram Patel scolded the people of India for ‘not taking the government to task’ for the catastrophic failures in health. Further, he pointed out that most countries ahead of India on their SDG health indices have adopted a universal health care system and show a strong commitment to addressing the social determinants of health such as sanitation and hunger. Neither has happened in India, he argued, because we – i.e. political parties and their leaders – have ‘lacked the political will’ to do so.

Patel’s two points, that citizens have not taken their government to task for their failures in health; and that there is a lack of political will to address health issues; merit elaboration and further discussion, because they are related and because both help us better understand the reasons for our abject health situation.

Just over 20 years ago, Lant Pritchett and Lawrence H. Summers proclaimed that “wealthier is healthier.” Sadly, we continue to defy Pritchett and Summers. Despite registering impressive rates of economic growth for nearly four decades, we are still not doing well on health and other common indicators of well-being. But economic growth, and more broadly a nation’s prosperity, in fact, provides only one of the two main pathways to improve population health; as James McGuire and others have convincingly demonstrated, there is a second pathway via improved provision of social services such as (but not limited to) water supply, electricity, roads, health services, education and others which does not necessarily require massive commitment of scarce resources. Many countries around the world – including our neighbours Sri Lanka and Islamic Bangladesh – have reduced infant, child and maternal mortality and increased life expectancy significantly by improving the supply of a range of social services despite not-so-stellar an economic performance as India’s.

The two pathways to good health – the first via economic growth and the second via improved public provision of social services – are not independent of or disconnected from each other. Buoyed by economic growth, governments can direct more resources towards providing health and related social services; with higher incomes, households too can purchase better and adequate health services. In both cases, population health improves with and due to better access to health and other social services through some combination of public provision of services and out-of-pocket spending.

It is important to understand, however, that economic growth may not by itself improve population health unless:

The silence of the citizens

Coming back to Patel’s observation about citizens not taking the government to task, the question is why and how does it matter? Also, what are the options available for citizens to punish or threaten to punish the government?

As discussed above, the provision of social services is the key to improving population health. The provision of and expansion in the supply of public services comes about through top-down initiatives, bottom up pressures and some combination of the two. While top-down initiatives have typically been dominant in the initiation and expansion of public services, the ‘pace, scope and quality’ of improvements are often driven by widespread and sustained bottom-up pressures by civil society actors.

Top-down initiatives, of course, refer to what any government does with respect to the provision of x or y public services, whether on its own or because citizens expect or demand x or y, thereby nudging it to be attentive to those public services. Bottom-up pressures by civil society actors for x or y public services are often necessary to activate and/or improve top-down measures. It is common for governments that do not face sufficient pressures from below for better social services to not even bother doing the simplest things such as spending money earmarked for healthcare.

Bottom-up pressures typically take two forms, both of which can be seen as acts of taking the government to task.

There are many reasons for the silence of India’s citizens. We have earlier argued that citizens do not demand public services because:

Paradoxically, all kinds of social groups make all sorts of demands on the government. However, most popular mobilisations – especially of the kind that attract more participants, endure over time and are eventually more successful in achieving their objectives – are organised around identity issues. Identity-based movements usually make narrow claims for their own ethnic group, almost always to the exclusion of others, and only rarely demand better social services.

That Indians are not taking the government to task, whether in terms of the vote or by making collective claims for better public services, at least not in any prominent and visible ways, is quite surprising given that the country’s overall health scenario is dismal, even worse in select states, and downright scandalous for those who are poor or belong to low income groups. One would expect them – as citizens and certainly as voters – to take the government to task for their poor welfare performance. Instead, however, they – a large majority – suffer in near silence. As we argue in the following section, the absence of bottom-up pressures for social services is intimately connected to the lack of political will on the part of the government, the second point that Patel makes, to address what may be called the ‘health question.’

The lack of political will

Let us assume that key decision makers know and agree on policy solutions to, in this case the particular problem of health, whether it is by way of health spending; greater emphasis on infant, child and maternal care; provision of clean water etc. Now, why would key decision makers – elected or unelected, whether political leaders or bureaucrats – show ‘committed support’ for a policy solution to health problem?

There are two answers to the question. The easy answer is that there are those rare occasions when enlightened men and/or women come to power and take upon themselves the task of addressing a range of welfare issues, whether health, education or something else. To take the idea further, key decision makers are likely to show committed support for health-improving measures when social responsibility understood in terms of good health for all – or more generally the well-being of all citizens – is a key component of their ideological beliefs. Thus, when political leaders and other such key decision makers, usually driven by left-wing and/or nationalist ideas, take their social responsibilities defined as above seriously, we could say that they have the political will to address the ‘health question’. Many countries around the world, including China and Cuba, have improved population health because of the specific ideological beliefs of its leaders.

It is the poor and low-income groups who need public services more than others. In poorer countries, they constitute a majority of the population and have the numbers on their side to mobilise and put pressure on the government and take it to task. Therefore, for an elected government to show the will to improve health and such social services, it is essential that the poor and low-income groups organise and demand those services. If such pressures from below do not work, they must take the next logical step of voting it out of power, thereby sending a clear signal to those who form the next government that they must be attentive to social services or meet the same fate as the previous government.

It is evident that the political will of a government to address health issues is intimately tied to the willingness and ability of citizens to take that government to task, whether by mobilising against it to demand x or y, failing which, by voting it out of power. However, it is also important to understand that political will does not guarantee policy success. Good intentions and committed support among key decision makers for specific policy measures are not sufficient for policy success. The success of policies is sometimes unintentional as well so that good outcomes have little to do with political will or something else.

India’s health prospects remain doubtful. There has been greater progress in some areas than in others. Some states have moved ahead in population health but others have remained behind. Some old challenges have been addressed but newer ones have emerged. In some cases, older challenges have reemerged as bigger challenges. What is clear though is that India’s ‘health question’ must be addressed at the state level first. The capability and powers of the central government to improve population health is limited. Until the states themselves – especially the nine states which remain behind the rest – take up the ‘health question’ in earnest, India’s overall progress will remain limited. The question remains: Where will their political will to address health come from?

Madhvi Gupta is an independent researcher based in Goa. Pushkar is director, the International Centre Goa, Dona Paula.