Generous funds won't change the fundamental nature of the police system in India, which citizens are increasingly mistrustful of. 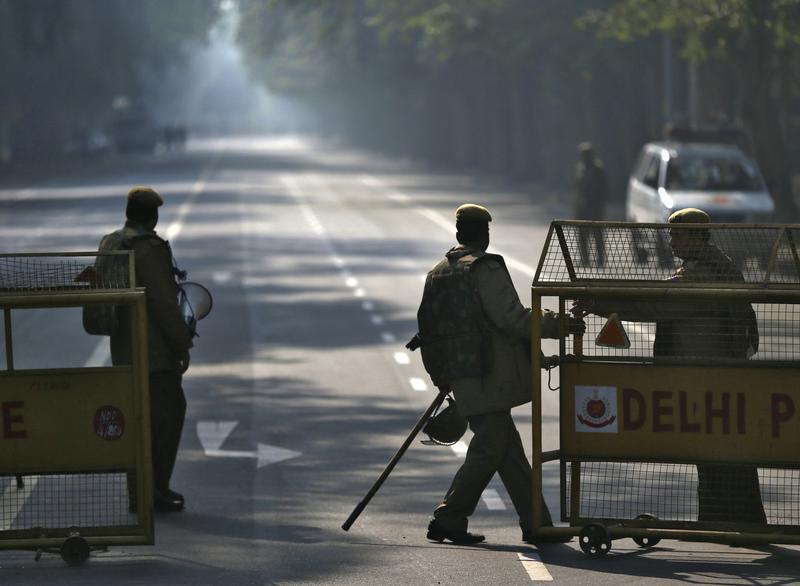 A police officer pulls a barricade to close a road leading to the India Gate in New Delhi December 29, 2012. Credit: Reuters/Ahmad Masood

Last month, in a much-needed forward-thinking move, the Cabinet Committee on Security (CCS) has approved a Rs 25,000 crore internal security scheme to strengthen the country’s law and order architecture, modernise state police forces and enhance their capacity to fight terrorism. Hailed as “one of the biggest moves towards police modernisation” in the country, the umbrella scheme, Modernisation of Police Forces (MPF), will be implemented between 2017 and 2020.

The scheme focuses on improving police mobility, weapons, equipment, training infrastructure, computerisation and forensic science facilities. It has special provisions for internal security, law and order, women’s security, availability of modern weapons, mobility of police forces, logistics support, hiring of helicopters, upgradation of police wireless, national satellite network, CCTNS (Crime and Criminal Tracking Network Systems) project and the e-prison project. The overall objective is to help states spruce up their police infrastructure, especially in the domains of transport, communications and forensic support, and to enable them to effectively come to grips with contemporary challenges. The scheme also caters to the ever-urgent need to strengthen the criminal justice system, with a slew of new initiatives to provide assistance to states in order to upgrade police infrastructure, forensic science laboratories, institutions and equipment in order to plug gaps in the criminal justice system.

Under this scheme, a central budget outlay of Rs 10,132 crore has been earmarked for expenditures pertaining to internal security in Jammu and Kashmir, northeastern states and states affected by left-wing extremism (LWE). Special central assistance for the 35 LWE-affected districts has been introduced with an outlay of Rs 3,000 crore, to address infrastructure development in these areas. The idea is to give a fillip to the LWE-affected districts in terms of security-related infrastructure, whereby the Centre would also “provide 100% support” in LWE areas where central paramilitary forces have been serving. Out of the total outlay, the Centre will provide Rs 18,636 crore or about 75%, while states’ share will be Rs 6,424 crore.

“The 14th Finance Commission had recognised the MPF scheme and it had stopped for a while in between. We are now resuming it with a 42% budget allocation,” home minister Rajnath Singh told reporters on September 27.

There is a history of true intentions and false starts behind the ambitious MPF scheme. In 2000, the Ministry of Home Affairs rolled out the MPF scheme, which was meant to give the police a makeover and reduce dependence on paramilitary troops. The scheme was designed to equip the police with the latest equipment and infrastructure.

Following the 14th Finance Commission recommendations, which increased the states’ share of central taxes from 32% to 42%, the Centre delinked eight centrally-sponsored schemes from its support in 2015. These schemes included the modernisation of police. The rationale given was that with a much larger devolution of resources from the Centre to the states, the latter should be able to shoulder the additional burden. While central funding for the modernisation of police was being stopped, non-plan funding for the same would continue.

This financial arrangement did not work on the ground. Most state governments were loath to make any investments in the police for reasons that don’t belong to the realm of rocket science. As a result, police modernisation schemes received a setback. Several state police chiefs expressed concern that the battle against Maoists and terrorists of different hues was getting badly hit with modernisation grants drying up. Thankfully, the home ministry decided to revert to the old arrangement under which funds for modernisation were released every year. And then came the refreshingly progressive decision of the CCS last month.

Now that the police forces in the country will get generous funds, the question that should engage the attention of our policy makers and police leadership is, will it change the fundamental nature of policing and internal security administration in the country? There are certain things that need to be taken into account when discussing this.

One, financial resources can’t be a substitute for robust leadership in any organisation. Police organisations in India are afflicted with a leadership deficit that cannot be addressed by allocating more funds. The ‘police reforms’ lobby besotted with the 2006 Prakash Singh judgement need to accept and appreciate the fact that the police leadership in the country, that is the elite members of the Indian Police Service (IPS), need to introspect about where and how they have failed to deliver democratic policing to citizens. Blaming the political class, criminal justice system and the Indian Administrative Service, and obsessing over a saviour in the form of legal recourse, won’t work. Police accountability and, by extension,, the accountability of the police leadership, need to be factored into any informed analysis of the situation.

Two, rampant paramilitarisation of civilian police is not how democratic policing should play out in the country. Our police stations are the most neglected units within the organisational pyramid. Proliferation of armed police and paramilitary units and continuation of paramilitary protocols under the watch of the IPS won’t improve the situation.

Three, forget far-off places like Kupwara, Kohima and Sukma, even in metros like Delhi, Chennai and Mumbai, public trust in the police is quite low. Only 6-8% of victims of theft in four major Indian cities (Mumbai, Delhi, Bengaluru and Chennai) lodged an FIR with the police, according to a new study. The remaining 92-94% are not reflected in any official record. Under the Criminal Procedure Code (CrPC), police officers have discretionary power to decide whether a case should be registered. Since most victims do not understand the legalese associated with the process of filing a report, they remain at the mercy of officers who eventually record the FIR and file the chargesheet. Since FIRs dictate all subsequent police action, these two elements — the discretionary power with the police to decide on case registration and the complainants’ dependence on officers for help with filing a report — have huge impact upon the institution of policing and criminal justice. Merely increasing financial allocation won’t clean this mess.

Four, policing is a labour-intensive enterprise. Modern machines can’t undo the damage done by the medieval mindset of our police officers. Technological upgradation can’t open the door of the badakhana-centric feudal system to the winds of democratic aspirations of the citizens. It is high time the police forces in India and their leadership focus their organisational energy on behavioural and attitudinal changes in their personnel.

A police officer pulls a barricade to close a road leading to the India Gate in New Delhi December 29, 2012. Credit: Reuters/Ahmad Masood

Five, how legitimate do the police forces and their organisational practices look in the eyes of the disadvantaged in the country? How do women, Dalits, minorities and Adivasis look at the men and women in uniform? How much of this will change because of better funding needs a close look from the policy makers.

Six, law and order is a misnomer in the Indian context. More often than not, it is law versus order. Policing in India is more about order than about law. The focus on order over law is a major reason why our conviction ratio in criminal cases is poor (about 22% compared to over 90% in Japan and over 70% in the US). It was higher in the British period and has fallen from 60% over 50 years ago.

The country deserves a democratic policing architecture. Money can’t buy it. Over to the badakhana-loving darbar specialists in the IPS.