In a written response to a Rajya Sabha question, minister V. Muraleedharan said that the PM has travelled most frequently to the US, Russia and China. 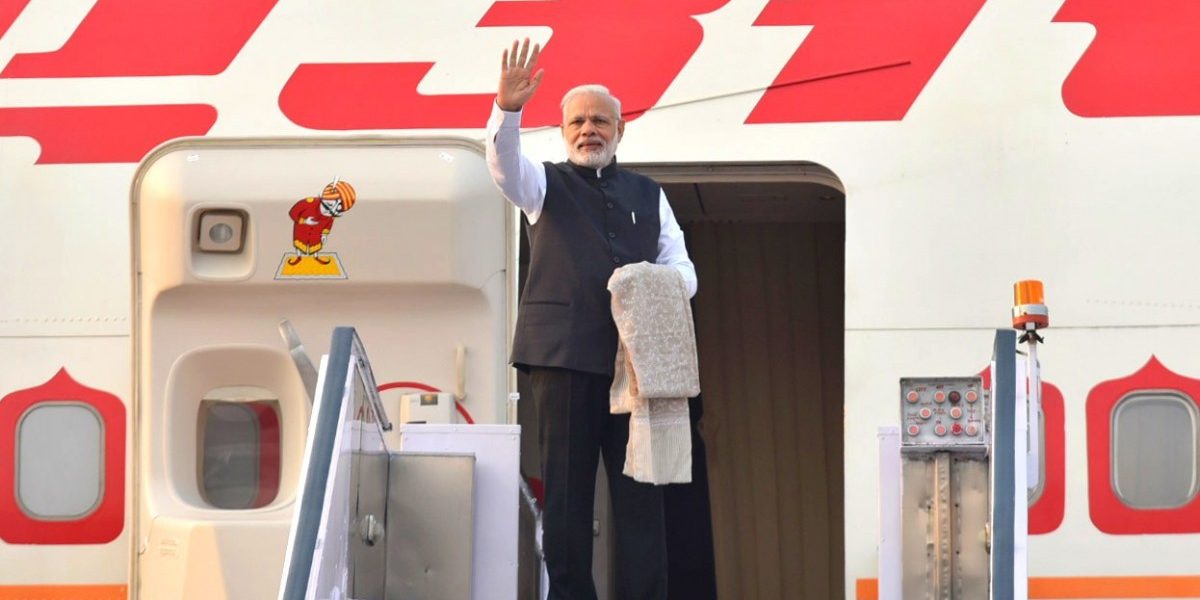 Prime Minister Modi at the gate of an Air India flight. Photo: PIB

New Delhi: Prime Minister Narendra Modi has visited 58 countries since 2015 and a total expenditure of Rs 517 crore was incurred on his travels, the Centre revealed in the Rajya Sabha on Tuesday.

In a written response to questions posed by Nationalist Congress Party’s Fauzia Khan, minister of state for external affairs V. Muraleedharan provided details of the prime minister’s visits abroad since 2015, including their outcome.

According to the details provided by Muraleedharan, PM Modi has visited the US, Russia and China most frequently, travelling to these countries five times. He has also made multiple trips to Singapore, Germany, France, Sri Lanka and the United Arab Emirates.

Some of the visits were multi-nation trips while some were standalone bilateral visits, the reply shows.

Modi’s last trip was to Brazil on November 13-14 in 2019, where he attended a summit of the influential BRICS (Brazil-Russia-India-China-South Africa) grouping.

Muraleedharan said Modi’s visits to the countries have enhanced their understanding of India’s perspectives on bilateral, regional and global issues.

He said the visits helped in strengthening India’s relations with the countries in a wide range of sectors including trade and investment, technology, defence collaboration and people-to-people contact.

“These, in turn, have contributed to India’s national development agenda to promote economic growth and well being of our people,” the minister said.

“India is now increasingly contributing to shaping the global agenda at the multilateral level including on climate change, trans-national crime and terrorism, cyber security and nuclear non-proliferation, and offering to the world its own unique initiatives for global issues like the International Solar Alliance,” he added.

The reply also states, “[The] Prime Minister’s interactions during his visits abroad have enhanced understanding of India’s perspectives on bilateral, regional and global issues by other countries, and have strengthened our relations with them across a wide range of sectors including trade & investment, technology, maritime, space, defence collaboration and people to people contact.”

Muraleedharan’s response also shows that during the PM’s visits to China, New Delhi and Beijing have signed more than 50 treaties, most of which are memorandoms of understanding (MoUs). The two countries have been locked in a military faceoff at the border near Ladakh since May this year.

To a separate question on Nepal, Muraleedharan said India’s age-old ties with the neighbouring country are “unique and special”, based on shared history, geography, culture, close people to people ties, mutual security and close economic linkages, according to a PTI report.

Asked whether the government is aware that Nepal has signed a number of transit and transportation treaties with China in the past few years to shrug off its dependence on India, he said New Delhi’s ties with Kathmandu stand on their own merit.

“Two thirds of Nepal’s global trade is with India and over 90 per cent of Nepal’s third country import-export transit is through India. India’s ties with Nepal stand on their own merit, and are independent of Nepal’s relations with third countries,” he said.

India’s ties with Nepal came under strain after the Himalayan nation came up with a new political map in May showing Lipulekh, Kalapani and Limpiyadhura in Uttarakhand as its territories.

India maintains that these areas along the border with Nepal in Uttarakhand belong to it.