After Users Point Out Its Unusual 'Likes' on Twitter, PIB Blames 'Malfunction'

Ranging from Japanese cosplay accounts to pornography, the official and Hindi handles of the Bureau have 'liked' a slew of tweets.

New Delhi: The Twitter accounts of the Press Information Bureau (PIB), a Central government agency tasked with disseminating information to the print, electronic and new media, have recently been ‘liking’ a strange slew of tweets, ranging from Japanese cosplay accounts to pornography.

The likes seem to have started on February 15, with a Japanese tweet featuring a ship being the first unusual one.

Earlier on Monday, the PIB offered a statement on these posts, claiming an “unknown malfunction” has caused their official account (@PIB_India) to like random tweets in different languages.

Due to unknown malfunction, @PIB_India handle has been generating a series of random likes of tweets in multiple languages since this morning. @TwitterIndia has been apprised on the issue & is working to resolve it. We thank all those who have connected with us on the issue.

However, this seems suspicious, given that the Bureau’s corresponding Hindi account, @PIBHindi, has also liked a number of tweets in the same vein. The overlap is stark, with some tweets being liked by both, the English account and the Hindi account. 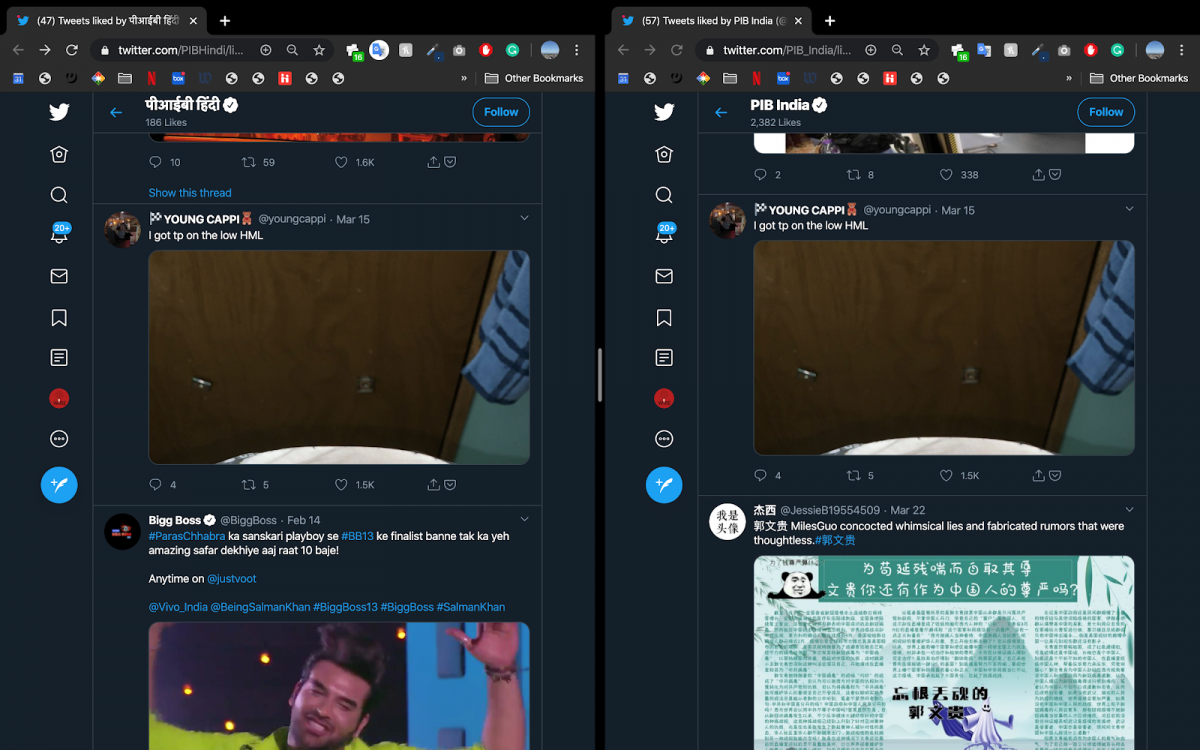 Similar tweets liked by the main and Hindi accounts of PIB.

The likes have not gone unnoticed by Twitter users.

Also Read: Amit Shah Says BJP Got 52 Lakh ‘Pro-CAA’ Calls. How Many Were by Lonely Hearts?

The secretary of the All India Progressive Women’s Association, Kavita Krishnan, has also voiced her concern regarding these tweets.

Lots of Japanese tweets on the @PIBHindi handle also, along with pornographic stuff, none of which is removed yet!

The first unusual tweet liked by @PIBHindi dates back to March, while their last ‘normal’ like was on November 6, 2019.

A list of the unusual tweets liked by the accounts can be found here.