Perspectives on Creating a Space Industry Ecosystem in India

In the present model of engaging the local space industry in India, there is no extensive commercial exploitation of space infrastructure due to lack of deregulation and privatisation. 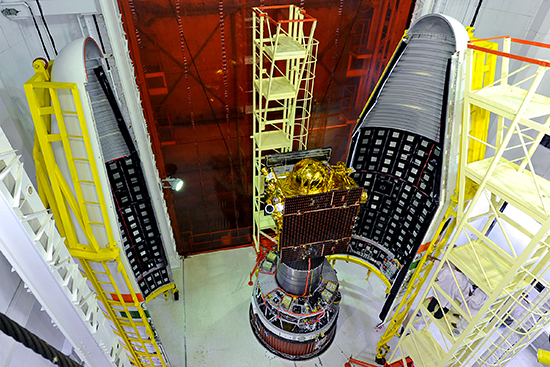 Two halves of the PSLV-C22 heat shield enclosing the IRNSS-1A satellite, whose clocks have developed glitches, ahead of launch in July 2013. Source: ISRO

The space sector can be divided into upstream and downstream. The former comprises manufacturing of satellites, parts, subsystems, launch vehicles while the latter provisions services based on satellites, such as satellite TV, imagery, communications etc. The existing value chain is currently run by government entities, and participation of the commercial space industry is mostly limited to the supply of parts, components- and subsystems-manufacturing or using the space infrastructure created by the government to provide services.

In the present model of engaging the local space industry in India, there is no extensive commercial exploitation of space infrastructure due to lack of deregulation and privatisation. Therefore, there is heavy reliance on the government for either space infrastructure to host services (such as DTH television) or orders to manufacture parts/systems. So, the economic dividend in using space is heavily dependent on the taxpayer’s money. In comparison, any advanced space-faring nation has privatised most of these blocks in the value chain, which has allowed the multiplier effect to create a significant economic impact.

Given the current rise in investments across sectors in the country, there is strong potential for creating a private space industry ecosystem in India that is independent of investing public money. Entrepreneurs can attract investments based on the needs of the local market (such as having a telecommunications satellites for DTH or internet services). There is great potential for the space sector in replicating the success of the telecommunications sector, where opportunities created by the government for larger private sector participation, and eventually a strong regulator and arbitrator of the industry, has evolved.

The Government of India needs to take such steps in building up such an extensive ecosystem to engender a ‘Space 2.0’ in India. Such a vision should enable the industry to not just support the needs of the local market but to take up turnkey development of upstream and downstream products and services for the global marketplace as well. This path in retrospect to the current can create a multiplier effect with some substantial benefits including:

Some recommendations for Space 2.0

1. A facilitating foundation – To be able to even debate commercial space in India and their viability within the government, or to make specific recommendations to the government, there needs to be a facilitating foundation. It is more important that this foundation remain without any conflict of interest to make recommendations to the Government of India. With no particular, dedicated, independent space commerce assessment body for space-related activities or a dedicated road map within ISRO for commercial space in India, there is a need to establish an ‘Office of Space Commerce’ that is independent of ISRO.

This office may be a principal unit under the Department of Industrial Policy and Promotion under the Ministry of Commerce and Industry. The same department is in-charge of the much talked about ‘Make in India’ campaign, which also lists space as a priority sector. Such a template is already present in the US – with the Department of Commerce creating an Office of Space Commercialization, legislatively established under Section 8 of the Technology Administration Act of 1998 (Public Law 105-309, as amended) by the US Congress as a principal unit for its space commerce policy activities, with a mission to foster the conditions for the economic growth and technological advancement of the US commercial space industry.

2. Demarcating space and defence – Issues around national security will always be a concern when an actor chooses to pursue space activities. However, holding possible commercial possibilities in utilising outer space hostage under the garb of national security will only hold back the country in expanding products/services. This may also lead to an ecosystem of Indian space entrepreneurs creating holding companies in space commerce friendly countries and operating their product/service, eventually creating loss of high-technology jobs and tax revenues for the country. Several scenarios of commercial space activities have played out in leading space-faring nations; there already lies a template in steps taken by governments in securing national security while actively promoting space commerce. These can provide significant lessons to the Department of Space in formulating an active commercial space strategy for promotion of Indian space industry.

FDI in defence has been opened up to 49% by the government. However, there is need for an active stand on leveraging outer space by defence forces. The first step in encouraging FDI in defence space could be a mandate apropos utilising outer space for defence operations and moving away from the present model of dual-use.

3. Promoting startups – If Indian industry needs to claim a greater traction in the international space market there is a need to promote and develop a model for promotion of startups with independent technology ideas, which carry the potential of leapfrogging product/service offerings out of India and are scalable globally. If such an ecosystem needs to be established, the government must consider instituting a national fund for promotion of entrepreneurship in space industry – along the lines of the Small Business Innovation Research and the Open Sky Technology fund to replicate the success of promotion and development of startups by NASA and the European Space Agency.

Further, one can set up a dedicated fund vehicle which would disburse money based on a national prize event, similar to Google’s XPrize, with industry leaders being the primary promoters (with the backing of ISRO), and bringing potential investors and stakeholders on the same table to promote innovation and entrepreneurship in this sector.

4. ISRO and Antrix providing mentorship – The emergence of Bengaluru as an IT and aerospace hub for the country should be leveraged for the space industry as well. Dedicated infrastructure to enable technology development (e.g. Berlin Adlershof) should be allocated to space ventures emerging from India to assist them in the startup stage. In addition, mentorship by senior ISRO and Antrix executives will ensure they operate within the Indian space policy framework but are still able to leverage technical expertise built by ISRO in an appropriate manner.

5. Space laws – The enactment of space legislations to define regulatory, legal and procedural regimes with transparent timelines for pursuing space activities by the private space industry is currently at a nascent stage. No national laws govern space activities while remaining critically necessary. Activating standalone policy packages for regulating a service/product as a retrospective measure on commercial interest can only be an initial step unto actively promoting and encouraging commercial space activities.

6. Manufacturing in space sector – The government has taken significant steps in the creation of an active investor mindset by rolling out programmes like ‘Make in India’. But even though space has been an identified as a sector within the campaign, no significant proposals have been mooted for manufacturing space-related systems in India. So there is a need for a transparent strategy on how the potential of the space sector can be leveraged under this programme. There are significant opportunities in manufacturing (e.g., of small satellites) and services (e.g., geographic information systems) for which a framework for engagement needs to be developed.

7. Establishing think-tanks – There is scope to establish an independent, wholly space-activities-focused think-tank similar to the European Space Policy Institute, constituting distinguished experts in the space field while preserving its independence in the preparation of its various research outputs, research materials and expert gatherings. Such a think-tank will not only provide a fair assessment of national goals but also, potentially, key insights on space programme management, dual-use of technologies, economic impacts of space expenditures, space law, international cooperative space agreements, etc.

8. Setting up industry-academia linkups – Actively engaging academia as well as the industry is of significant importance – especially for creating systemic changes in establishing a leading research environment. One of the excellent methods of moving away from an ‘islands of excellence’ model to actively promoting interdependent engagement is by creating flagship programmes (where each of these stakeholders have concrete involvement in deliverables and gain significant benefits having long term ecosystem prospects of spin-offs). Such templates are already available with programmes such as Hodoyoshi by the Japanese government.

There is immense scope to create further synergy in the Indian space sector by rejuvenating government policies, technological capability building towards building end-to-end systems, workforce skill development and regulatory framework. These reforms must be specifically targeted towards an improved product/service in non-space applications, non-space supply contracts, improvements in quality standards, access to new markets, and actual or potential entries into export markets.