A former judge of the Supreme Court, two court registry officers and the woman who accused ex CJI Gogoi of sexual harassment were on the list of possible targets. 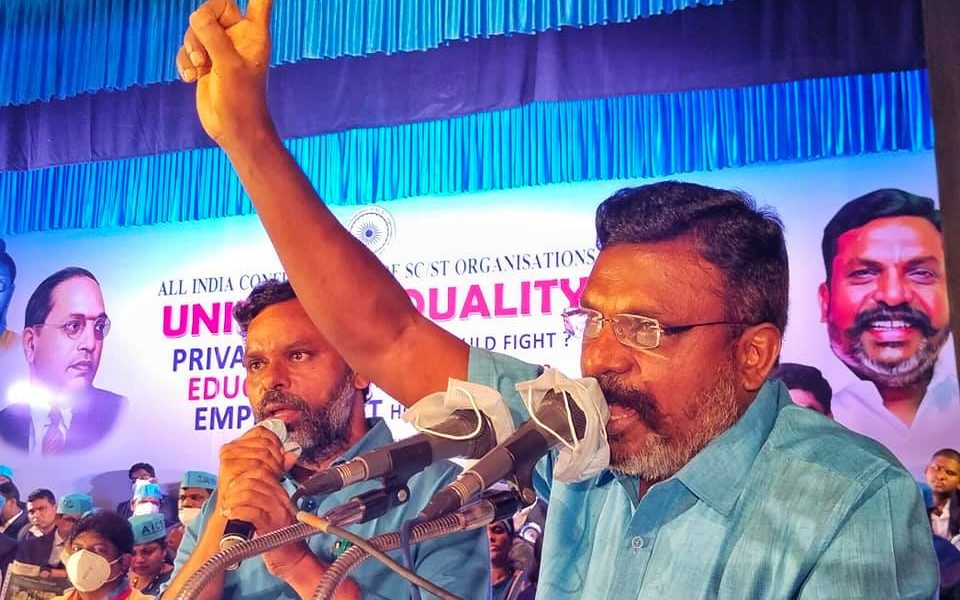 It has been “reasonably apparent” that these persons, Thirumavalavan’s letter to Venugopal argues, “were involved in an effort of military grade surveillance against a Supreme Court justice, while he still was in office, two Supreme Court registry officials on the judicial side of the writ section, and another Supreme Court staffer”. This surveillance was conducted using Pegasus spyware, sold by the NSO Group to “vetted governments”, he said.

“This is tantamount to shockingly gross interference and obstruction of the administration of justice, for which accountability ought to be fixed inter alia under S.2(c)(iii) of the Contempt of Courts Act, 1971,” the letter says.

Starting July 18, a group of 17 media organisations from around the world including The Wire began releasing details of a leaked database of 50,000 numbers who may have been targeted for surveillance by clients of NSO Group. The news organisations working on Pegasus Project were independently able to identify the owners of over 1,500 numbers across at least 10 countries. A small cross-section of these phones was forensically examined to find traces of Pegasus.

Since the revelations, France’s national cybersecurity authorities have confirmed the Pegasus infection on the phones of two French journalists who were on the list.

Also read: We Can Learn a Lot from Modi and Macron’s Contrasting Responses to Pegasus Revelations

The Indian government, Thirumavalavan says, has been “equivocal and vague” in its responses to questions on whether or not it purchased Pegasus spyware and spied on its own citizens. While specific branches of the government have issued denials, no answer has been given on when the Indian government as a whole employed this hacking technique.

The home secretary, the letter continues, is the appropriate authority in India when it comes to deploying surveillance on citizens. That is why he has listed them as contemnors in his plea.

“Under the rules under the Telegraph Act and the Information Technology Act as cited by the Government of India, the competent authority to direct interception,monitoringordecryptionistheSecretaryofHomeAffairs. Some of the alleged hacking and surveillance has occurred during the tenure of the present Home Secretary Mr. Ajay Bhalla and some of it in the tenure of Mr. Rajiv Gauba, the then Home Secretary (who now happens to be the Cabinet Secretary). It is therefore proposed that both Mr. Bhalla and Mr. Gauba be arraigned as Alleged Contemnors in the proposed contempt petition for which Your consent is sought.”

One number formerly used by retired Supreme Court judge Justice Arun Mishra was on the leaked list. As The Wire has reported, Justice Mishra was still a sitting judge at the time when the number was added, but he had given up using it a few years prior to that. The telephone numbers of two officers from the Supreme Court’s registry were also on the list. Another cluster of numbers on the list belonged to the woman who accused former CJI Ranjan Gogoi of sexual harassment and her family members.

“The attempt of surveillance being carried out on a Supreme Court judge, who was in office in 2019, when his number was added to the database, and supreme court registry officials and staffer, using a military-grade cyber weapon, which is an act of undeclared civil war, undoubtedly amounts to an act which tends to interfere and obstruct the administration of justice, thus falling under the definition of Criminal Contempt of Court under S. 2(c)(iii) of the Contempt of Courts Act, 1971,” Thirumavalavan’s letter to Venugopal says.

“For the judiciary to perform its duties and functions effectively it is necessary to protect the authority of courts at all costs. Any unjust interference with the work of the judiciary will weaken the cornerstone of our constitutional scheme and, hence, jeopardise the rule of law and civilised life in the society. This is the sole reason that the Judiciary in India has been vested with powers to punish those who indulge in any act which tends to interfere or obstructs the judges from discharging their duties without fear or favour,” it continues.

The home ministry, Thirumavalavan says, has deliberately attempted to reduce the court’s independence by deploying Pegasus spyware against officials of the court. “The Ministry of Home affairs, by allowing surveillance upon the members of the judiciary, has tried to weaken the public’s trust in the independent functioning of the judiciary, hence made an attempt to dismantle the very fabric of democracy. Thus, it is also a case where one arm of the State has tried to fundamentally dislodge the other arm of the State, that too, the judiciary which is the central pillar of democracy.”

Given these facts, the MP has requested the AG to allow contempt proceedings in the case.

Letter to AG by The Wire on Scribd