Opposition parties' prolonged demand for a discussion and inquiry on the Pegasus revelations yielded no results as both sides accused each other of not allowing business to take place. 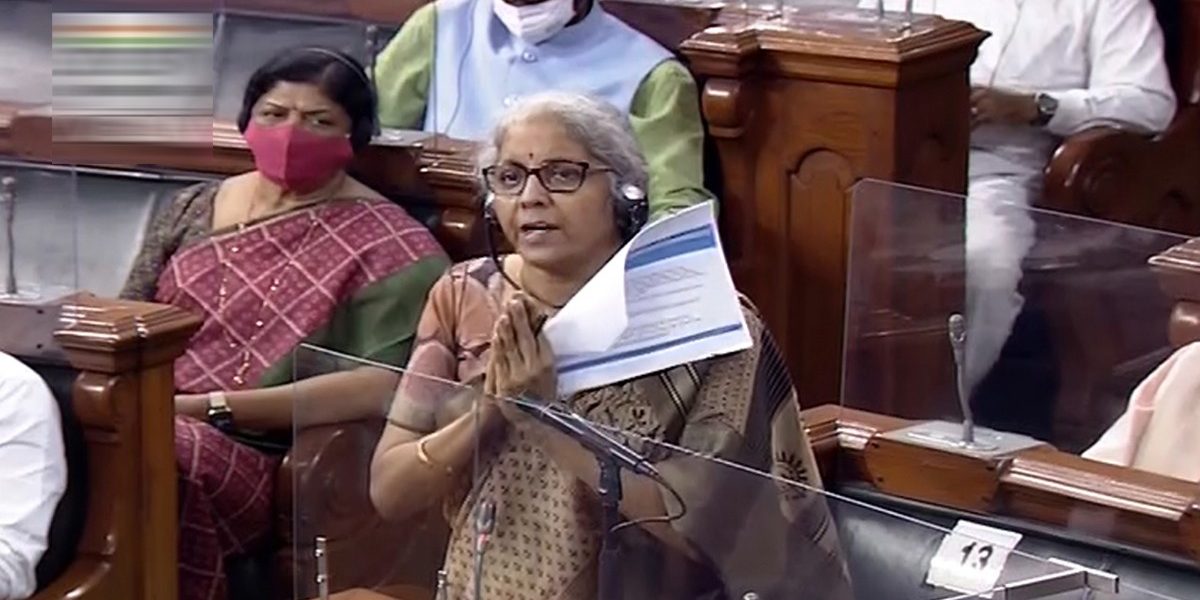 New Delhi: Both Lok Sabha and Rajya Sabha were again adjourned for the day on August 3 amid protests by the Opposition over the lack of a discussion on the revelations of the Pegasus Project and the farmers’ continued agitation against the three farm laws.

In the Lok Sabha, as soon as the House assembled at 11 am, Opposition members began protesting against the government’s refusal to either bring up the Pegasus issue or to have the allegations investigated by an independent judicial panel.

The Pegasus Project is a collaborative investigation that involved 17 news organisations – including The Wire – into a database of phone numbers selected for possible and successful surveillance by clients of the Israeli NSO Group. Among those that The Wire‘s reports have revealed were in the list are opposition politicians, journalists, senior government employees and activists.

Farmers have been protesting at Delhi’s borders against the three laws passed by the Centre in September 2020. Since the Monsoon Session began, sections of protesters have been holding a parallel Kisan Sansad at New Delhi’s Jantar Mantar.

As papers were being laid in the House, some Congress MPs, including Gurjeet Aujala, T.N. Prathapan and Hibi Eden, threw the business papers of the day, scraps of paper and placards towards the Chair, reported PTI. A piece of placard flew to the press gallery above the Speaker’s podium.

Speaker Om Birla said that he was “very hurt” by the MPs’ behaviour. 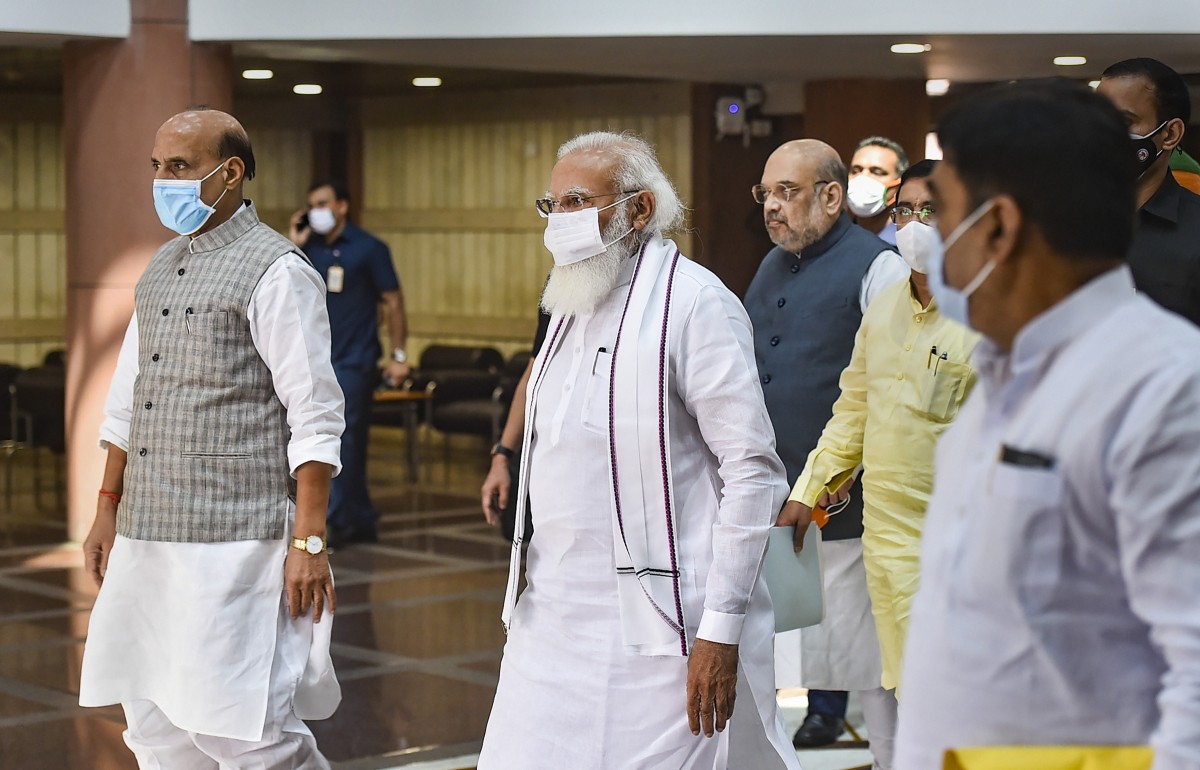 Union government, Opposition accuse each other

Opposition members accused the Union government of not paying heed to their demands. Leader of the Congress in Lok Sabha Adhir Ranjan Chowdhury accused the government of adopting a “stubborn attitude” in the matter.

On behalf of the government, Parliamentary Affairs Minister Pralhad Joshi – who had earlier called the Pegasus matter “not serious” – said that members who had torn the papers were not even prepared to apologise for their action. With the Opposition continuing its protests over the Pegasus issue and the three farm laws, the Speaker then adjourned the House till noon.

Later, when the House re-assembled it passed the Tribunals Reforms Bill, 2021 despite the Opposition continuing with its protests.

At this, Congress’s Chowdhury and Revolutionary Socialist Party MP N.K. Premchandran objected and insisted that the Bills should not be passed when the House was not in order.

Union finance minister Nirmala Sitharaman said that the government was prepared to answer queries pertaining to the Bills being laid in the House and criticised the Opposition for creating a “constitutional impasse” in parliament.

In the Rajya Sabha too, proceedings were adjourned multiple times due to the protests. First the House was adjourned till noon as the Opposition MPs continued to raise slogans over a discussion on Pegasus. 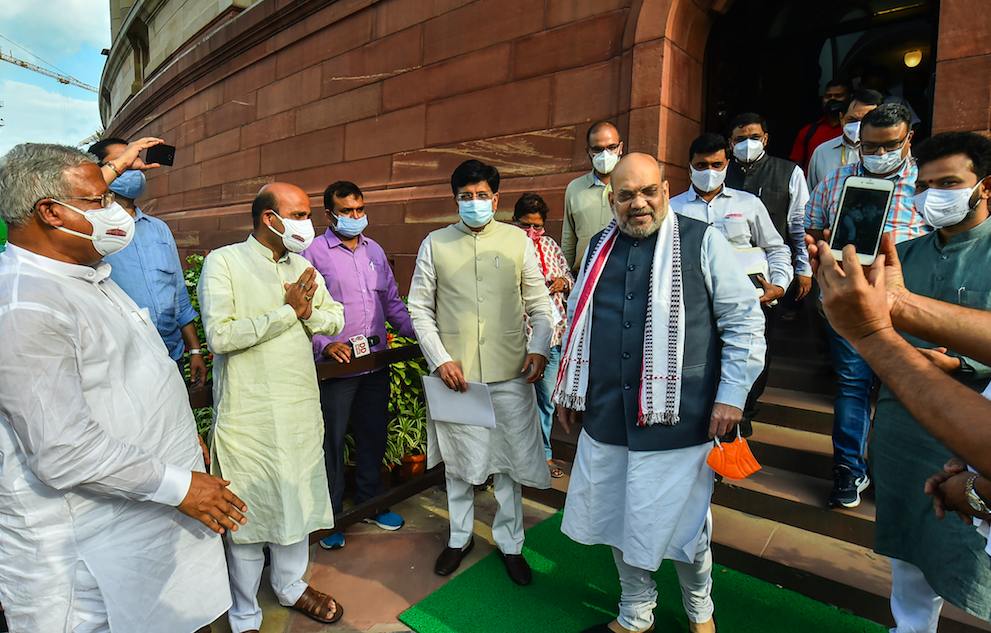 When the Rajya Sabha re-assembled at noon after the first adjournment, the Question Hour began. But the Opposition members into trooped in the Well of the House and continued to raise slogans.

Though some of the questions were answered by ministers concerned, the Deputy Chairman adjourned the proceedings till 2 pm as the Opposition continued to demand an investigation and a discussion on Pegasus.

When the House re-assembled at 2 pm, BJP member Bhubaneshwar Kalita, who was in the Chair, asked finance minister Nirmala Sitharaman to move the Insolvency and Bankruptcy Code (Amendment) Bill, 2021. The House passed the Bill following a brief discussion, which was hardly audible due to the ongoing protests.

John Brittas of Communist Party of India (Marxist), while participating in the brief debate, spoke about the danger to democracy that the Pegasus snooping issue posed.

The Bill, that was earlier passed by the Lok Sabha on July 28, was subsequently passed with voice vote amid chaos. The House was later adjourned in view of the protests.