The Congress's list of ten includes Abhishek Manu Singhvi, Kumar Ketkar and three candidates from Karnataka, where assembly polls are due soon. 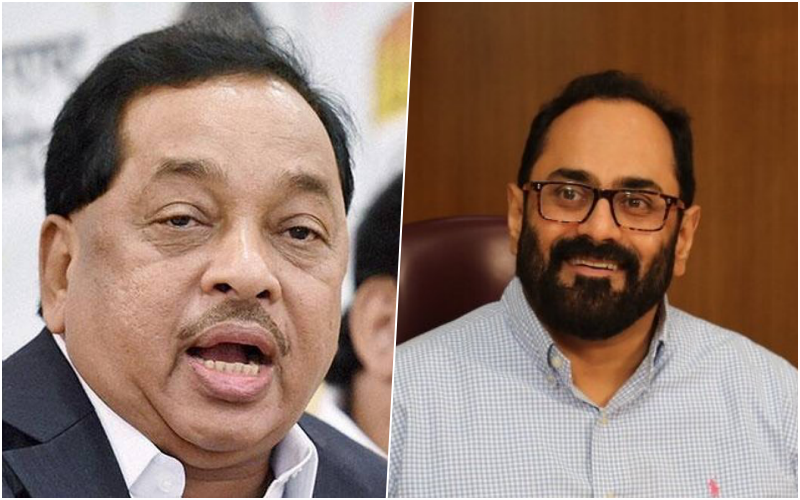 New Delhi: Former Maharashtra chief minister Narayan Rane, who switched from Shiv Sena to the Congress, will now be the BJP’s candidate from Maharashtra for the Rajya Sabha polls due on March 23.  Rane is among the 18 names announced by the ruling Bharatiya Janata Party (BJP) on Sunday.  With BJP’s oldest ally Shiv Sena announcing a split in the alliance for the 2019 Lok Sabha polls, the party believes that Rane’s presence will strengthen its base in the state.

Interestingly, Rajeev Chandrasekar, businessman and owner of Jupiter Capital and Republic TV , an ‘Independent’ Rajya Sabha member for two terms, has bagged a BJP ticket from Karnataka this time and is likely to formally join the party soon. The business tycoon had earlier won two terms in the Upper House as an Independent with support from the BJP as well as the H.D Devegowda-led Janata Dal (Secular).

After his name was announced, Chandrasekar told PTI that he would work towards “BJP’s movement to install a clean government in Karnataka,”  where polls are due shortly.

With an eye on the Karnataka polls, the Congress, too, announced the names of 10 candidates on Sunday, of which three are from Karnataka, where the incumbent Congress government led by Siddaramaiah is seeking another term. The three candidates are L Hanumanthaiah, Naseer Hussain and G.C Chandrashekar – a Dalit, A Muslim, and a Vokkaligga (a dominant OBC community), respectively.

Among the other Congress nominees are party spokesperson Abhishek Manu Singhvi from West Bengal, who has been offered support by the Trinamool Congress. Incidentally,  Singhvi, a senior advocate, represents his party in various high-profile cases as well as Karti Chidambaram, son of former finance minister P Chidambaram, in the INX Media case.

Among the other names in the Congress list are senior journalist Kumar Ketkar from Maharashtra, as per the list approved by Congress president Rahul Gandhi.

The BJP list has Anil Jain and Saroj Pandey, its spokespersons Anil Baluni and G V L Narasimha Rao, according to a party statement.

From Rajasthan, the BJP has opted for Kirori Lal Meena, an influential caste leader who fought against the party in the last Assembly polls in Rajasthan, where it suffered huge setbacks in the recent bypolls and civic elections which were won by the Congress and were seen as a vote against the Vasundhara Raje government.

Baluni, who heads BJP’s media departments, has been fielded from Uttarakhand while Rao, a spokesperson and psephologist, will file his nomination from Uttar Pradesh.

Rao hails from Andhra Pradesh, where BJP’s ties with its ally Telugu Desa Party have soured of late with the latter withdrawing its members from the National Democratic Alliance government at the Centre.

Former Kerala BJP chief V Muralidharan will be its second candidate from Maharashtra.

Saroj Pandey, who had lost the Lok Sabha polls in 2014, has been fielded from Chhattisgarh, Madan Lal Saini from Rajasthan, Lt Gen D P Vats (retd) from Haryana, Kailash Soni and Ajay Pratap Singh from Madhya Pradesh, Chandrasekhar from Karnataka and Sameer Oraon from Jharkhand, the BJP statement read.

From Uttar Pradesh, where BJP is set to win eight of the 10 seats going to the polls, its other candidates are Ashok Bajpai, who has been rewarded for quitting the Samajwadi Party and joining the BJP, former farmers cell chief Vijay Pal Singh Tomar, Sakal Deep Rajbhar, Kanta Kardam and Harnath Singh Yadav.

The name of finance minister Arun Jaitley from Uttar Pradesh, besides a number of other Union ministers had figured in the first list of candidates announced on March 7.

Among the names cleared by the Congress are Amee Yagnik and former Union minister Naranbhai Ratwa from Gujarat, Dhiraj Prasad Sahu from Jharkhand, and Rajmani Patel from Madhya Pradesh, party general secretary Oscar Fernandes, and Porika Balram Naik from Telangana.

The election to elect 58 Rajya Sabha members is slated on March 23 and the results will be out on the same day after 5 PM.

(with inputs from PTI)