TMC May Have Sacked Partha Chatterjee, But Its Problems With Corruption Run Deep

The anti-corruption reporting mechanisms introduced at the party and government level after 2019 Lok Sabha election debacle lost relevance after the 2021 assembly election victory. 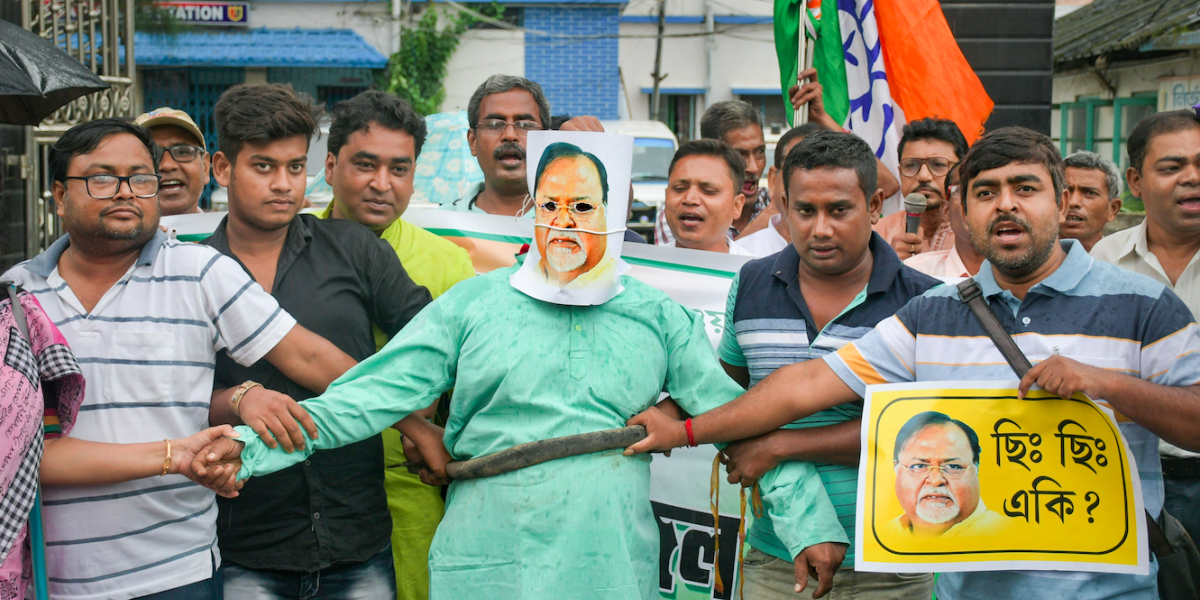 From ‘innocent until proven guilty’ a few hours after arrest, he became ‘guilty until proven innocent’ by July 28.

The scam had hit the party that hard.

Resultantly, it marked the first instance in the 11 years of Mamata Banerjee’s rule in the state when a minister arrested by a central agency on charges of corruption was sacked.

On July 23, after officials from the Enforcement Directorate (ED) arrested Chatterjee in connection with the recovery of Rs 21.9 crore in cash from the residence of one of his alleged close associates, Arpita Mukherjee – a small-time actor and model until a few years ago – the TMC said that the party will take action against Chatterjee only after the court finds him guilty.

But the recovery of another Rs 29 crore in cash along with gold and property deeds from another residence of Mukherjee on the night of July 27 embarrassed the party to no end. Chatterjee’s association with Mukherjee also became evident with secret property deeds linking the two. 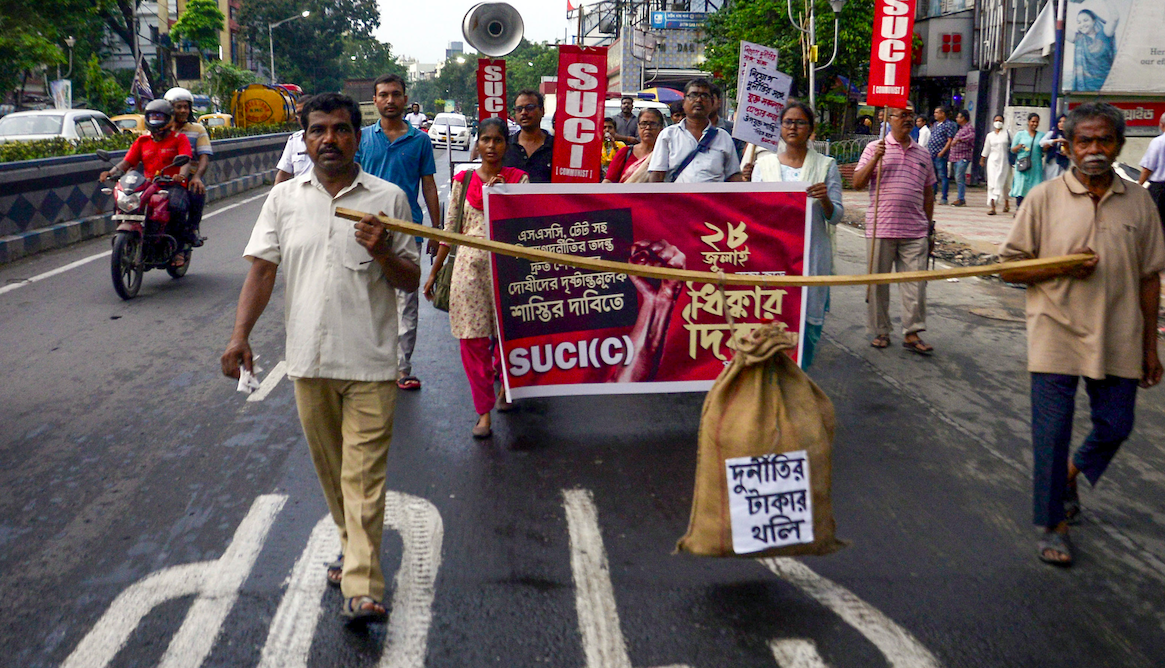 Members of SUCI carry a ‘corrupt cash bag’ during their protest rally against former West Bengal Minister Partha Chatterjee after he was arrested by ED officials in connection with its investigation into teacher recruitment scam and others those who involve in this scam, in Kolkata, Thursday, July 28,2022. Photo: PTI

On July 28, the chief minister first stripped Chatterjee of all his ministerial portfolios – parliamentary affairs, industry and commerce, information technology and industrial reconstructions – and then the party announced his removal from all organisational positions and suspension of his primary membership until he proved himself innocent.

“Certain facts have emerged over the past few days and certain perceptions have developed in the public. Considering the present circumstances, we would like to give the ‘benefit of doubt’ to the public perception and not to the party leader,” said Lok Sabha MP Abhishek Banerjee, chief minister Mamata Banerjee’s nephew and the party’s all-India general secretary, after convening a meeting of the party’s disciplinary committee that Chatterjee himself used to chair.

According to Udayan Bandyopadhyay, a columnist who teaches political science at Bangabasi College in Kolkata, Banerjee trusted Chatterjee and he took advantage of it.

“He should have been sacked soon after the first huge recovery of cash from Arpita Mukherjee’s residence. It’s shocking to imagine that Chatterjee indulged in such a massive scale of corruption and yet the party remained in complete darkness. The people of the state have not seen the amassing of such wealth by a politician before, and the party will have to struggle to convince people of its innocence,” Bandyopadhyay said.

Large scale irregularities in school recruitment – reported in a three-part series on The Wire (read parts one, two and three) – had already landed the party in enough trouble.

In his order dated May 17, Justice Abhijit Gangopadhyay, who ordered as many as eight CBI investigations into the recruitment scam involving the School Service Commission, had noted that Chatterjee’s involvement in the scam was ‘writ large’ and suggested that he should step down till the investigation is complete, or else the chief minister should sack him.

Even then, the party had stood by Chatterjee, just like it did for most of its senior leaders accused of corruption in the past 10 years, blaming political conspiracy. The party is now trying to put up a brave face by saying that it was because of the TMC’s “zero tolerance policy on corruption” that such prompt action has been taken against Chatterjee.

However, taking quick action against Chatterjee is not going to give the party any relief in the longer run, as corruption has evidently been a problem deeply rooted in the party, ironically led by a politician who had given up her Union minister post in the Atal Bihari Vajpayee government after a scam hit defence minister George Fernandes. Her modest lifestyle – Banerjee still lives in her small, ancestral home and wears a plain saree and slippers – has been her biggest political capital.

This, however, cannot be said of many of her party’s leaders, and the ghost of corruption keeps returning to haunt her.

“It has been proven time and again that from top to the bottom of the party is entrenched in corruption. The chief minister and her nephew are now trying to fool people. There is no way she can escape responsibility. Eighty percent of recruitment in schools during her rule are illegal. This has been such an elaborate scheme that it is unbelievable that the chief minister was unaware of what was happening,” said CPI(M) central committee member Sujan Chakraborty, a former MLA and Lok Sabha MP.

The BJP’s state unit president Sukanta Majumdar said that the TMC was trying to turn Chatterjee into a scapegoat to save other top leaders. “Who will believe that Partha Chatterjee alone was involved in this scam?” he asked.

In search of a mechanism

The Sarada chit fund scam and the Narada sting operation had both hit the TMC badly, with the Supreme Court ordering CBI investigations into both. However, perhaps because neither hit the TMC politically – possibly due to a vacuum in the opposition space – the TMC never cared to take any step towards checking corruption, at least through measures that were visible to the public. Despite the scam breaking out just a few days before the 2016 assembly elections, all the ministers and MLAs seen in the sting video allegedly accepting cash won from their constituencies, except for one.

The first time the party woke up to the challenge of checking corruption among leaders of various rank and standing was after its 2019 Lok Sabha election debacle, when the party’s tally came down to 22 from 34 in 2014.

It was found out while analysing the election results that people showed their anger against the TMC for limitless corruption at the grassroots level and the loot of votes in the 2018 panchayat election. BJP had pegged their electoral campaign largely on targeting the TMC over corruption. Terms like “cut-money” – meaning illegal cuts TMC leaders allegedly took from beneficiaries of various projects – and “syndicate raj” – indicating the rule of a real estate syndicate which arm twisted commoners with the support of leaders of the ruling party – were in the air.

To overcome the loss of people’s trust, Banerjee announced a crusade against corruption in her own party.

While addressing a meeting of the party’s municipal corporators from all over the state at Nazrul Mancha in Kolkata on June 18, 2019, Banerjee said, “‘I hear people are taking Rs 25,000 from the urban housing scheme. Some of you guys are even taking Rs 200 from the Rs 2,000 grant under the Somobyathi project (for funeral assistance)! Those of you who have taken cut-money, return it!”

As her comments went viral, starting from the very next day, the state stood witness to a unique chain of events unfolding — people gathering at the residences of TMC leaders, from panchayat members and municipal councillors to office-bearers at various unit levels of the TMC – seeking return of “cut-money.” The police made some arrests of panchayat members. 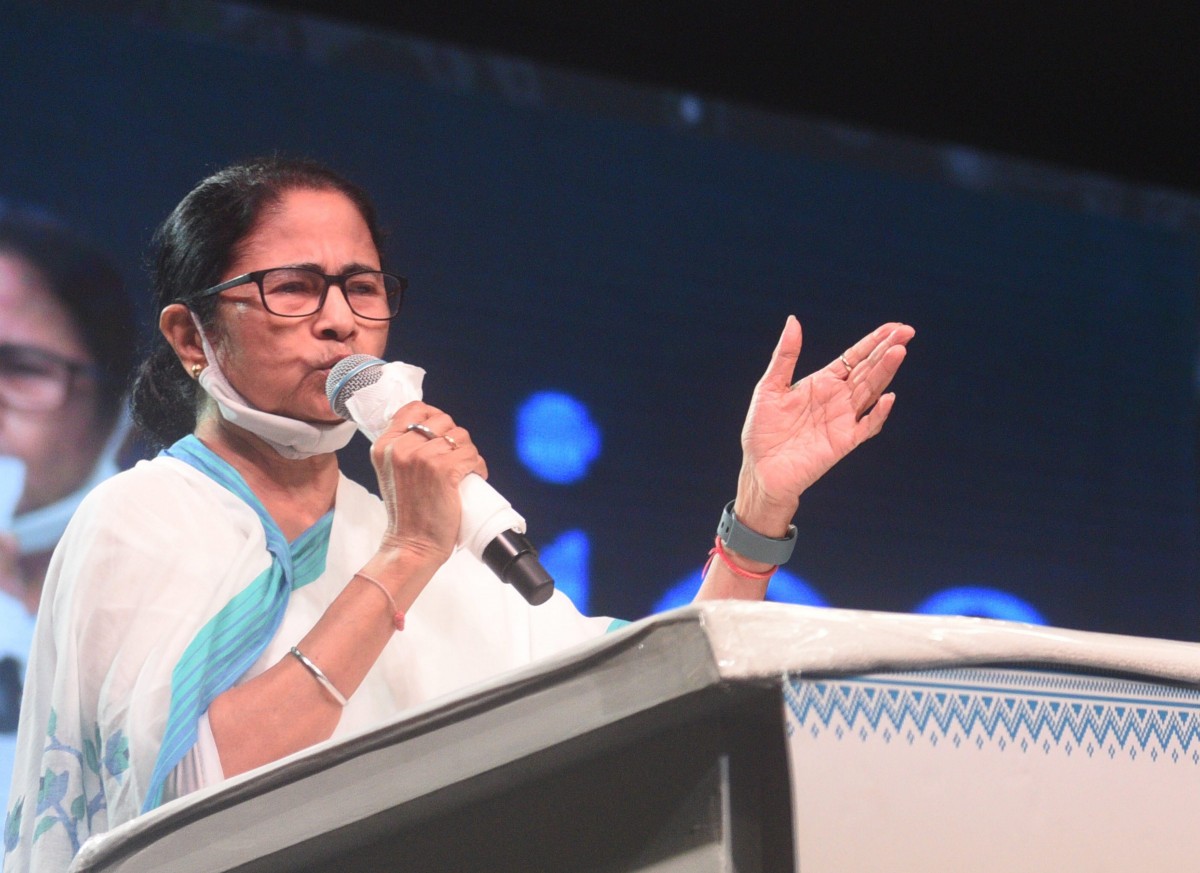 By the end of June, she had introduced a ‘grievance cell’ at her office and asked people to register their complaints there. People could lodge their complaints by calling a toll free number, sending a text message to a mobile number or sending an email. Informer’s identity will be protected, the government announced.

The next month, the party, in association to political strategist Prashant Kishor’s organisation, the Indian Political Action Committee (I-PAC), launched the Didi Ke Bolo (‘tell Didi’) campaign that allowed people to lodge their complaints regarding corruption, developmental gaps and poorly executed work directly with Didi, the name by which Banerjee is popularly called.

For the next few months, a designated team at the CMO and the ‘Didi Ke Bolo’ campaign used to record all these problems, make further inquiries and organise departmental coordination to solve the grievances. From various success stories that came up in Bengali media, the campaign appeared to be a hit.

“Didi Ke Bolo kept leaders at various levels under pressure of being observed by an invisible mechanism. Certain complaints drew the party’s attention to wealth illegally amassed by a section of leaders at the grassroots level and the party took steps in sidelining these leaders gradually,” said a veteran TMC MLA, adding that the campaign “died down” by the time the 2021 assembly election approached, as priorities changed.

The grievance redressal programme at the Chief Minister’s Office also seemed to have performed well, as the programme, formally named E-Samadhan, won the Skoch award for the country’s best ‘CMO Public Grievances System.’

However, the ‘Didi Ke Bolo’ campaign formally ended with Mamata Banerjee returning to power for a third time, in May 2021, with the highest seat tally ever. The last tweet made from the campaign handle was on May 6, 2021.

According to a TMC Lok Sabha MP, who did not want to be named, the party’s agreement with I-PAC for Bengal was till the assembly election, and since then I-PAC is working with the party mostly in states like Goa, Tripura and Meghalaya and only at a small scale in West Bengal.

The chief minister felt the need for reviving the corruption and irregularities reporting mechanism in March 2022, when it emerged in the aftermath of the Birbhum massacre that the reason behind the killings was a nexus between local politicians and anti-social elements and their rivalry over share of illegal money. She announced that a fresh campaign on the lines of ‘Didi Ke Bolo’ will be launched within two months.

The same month, while convening an administrative meeting in Purulia district, the chief minister said with visible display of dissatisfaction that the grievance cell at her office was taking too long to make enquiries and take actions.

A ‘Didi Ke Bolo’-type programme was expected to be launched in May but that has not happened as of now. “It’s still in the works. Some final-stage work is being done. The chief minister should announce it soon,” said a minister, unwilling to be named.

Meanwhile, her nephew, the party’s all-India general secretary Abhishek Banerjee has launched a similar programme for his Lok Sabha constituency, Diamond Harbour, last month. It has been named as “Ek Daake Abhishek,” or ‘Abhishek, in one phone call.’

The party’s political opponents, the BJP, the CPI(M) and the Congress, however, have repeatedly dubbed such mechanisms as mere eyewash, and tools for turning grassroots level leaders into sacrificial lambs to save senior ones.

Speaking to The Wire, a senior TMC MP said that merely introducing or reviving a system is not enough. “If there is a system, it has to be popularised every three or four months. People will have to be reminded and encouraged repeatedly to use such mechanisms, if the party is truly sincere about checking corruption,” the MP said.

He said that he was confident that neither the BJP’s high-voltage communal campaign nor the Union government’s ‘use of the ED and CBI for political purposes’ can help the BJP bring Mamata Banerjee’s government down. “Corruption is the party’s principal threat at present,” the MP said.