Parliament: The Winter of Our Discontent Will Spill Into Other Seasons Too

What makes this cold winter of Delhi appear more chilling is that Modi is largely succeeding in presenting parliament as a really troublesome gathering of boisterous politicians. 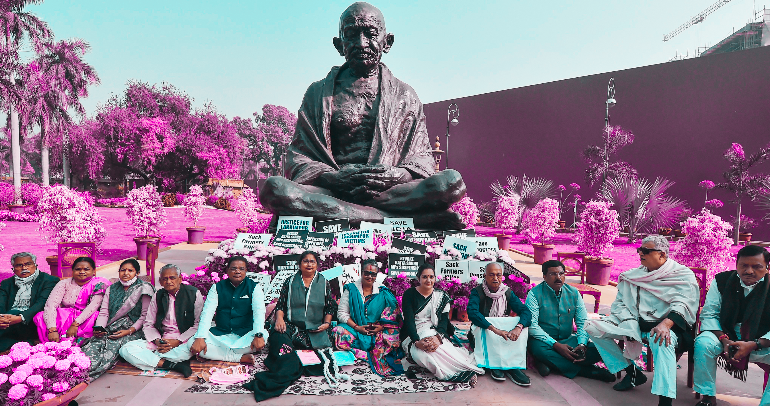 “The winter of our discontent,” describes with absolute aptness what most members of parliament felt as the session was finally signed off by the presiding officers, a day ahead of schedule.

What we may need to note beyond quotidian discussions on the “productivity” or otherwise of the session, is that it compelled a beleaguered Narendra Modi to finally reveal his fangs and claws, even as he went about masquerading as the Kalki prophet. Those who have studied his style of functioning as the longest-serving chief minister of Gujarat know how he systematically undermined the legislature and ensured that it met for no more than 30 days in a year – the lowest for any chief minister.

Parliament has, however, proved to be more resilient and he has been compelled to permit it sit for much longer periods. But with his recent jack-booting over long-standing parliamentary traditions of crafting workable compromises with the opposition, Modi has embarked on his mission to ensure that the institution looks increasingly redundant, so that people would support him in cutting it to size.

And what makes this unusually cold winter of Delhi appear more chilling is that Modi is largely succeeding in presenting parliament as a really troublesome gathering of boisterous politicians.

The ground was first prepared in 2018 and 2019, when Opposition became more strident as there were genuine doubts as to whether Modi could pull through in the 2019 elections with the same swagger that he had in 2014. The sudden pre-election combative spirit of the opposition was crushed by Modi, through means both fair and foul, even when the pre-election ‘unity’ actually led to a rare ‘no-confidence motion’ to be introduced in 2018 and actually debated for nearly 12 hours.

The affable Arun Jaitley had sanctified ‘disruption’ as a legitimate instrument of parliamentary democracy, but the present tactless pair that leads the Rajya Sabha screams every day as if it is a dire criminal offence.

This duo could really learn a lot from the late lamented twosome of Jaitley and Sushma Swaraj. Decibels notwithstanding, parliamentarians have an uncanny instinct of sensing when the government’s popularity has taken a sharp drop and then take the lunge accordingly. We may recall how that budget debates – the most critical task of parliament – were held to ransom by the opposition when elections were round the corner.

In these years, the embattled governments passed all the ‘demand for grants’ without any discussion. From the brutish manner in which the last Monsoon and Winter sessions have been handled, by not conceding to a single demand of the ‘united opposition’, it will not be a surprise if the Budget session next February-March is also washed out.

Though no national-level election is near, the polls to the Uttar Pradesh legislative assembly next spring is being treated by the opposition as a referendum for Modi’s rule of almost eight years. His mishandling of COVID-19 is believed to have infected the infallible and invincible one, and they can read the asymptomatic signs. And, as the largest state and the stronghold of the Hindi-Hindu brigade, it has disproportionate importance.

The heat emanating from Uttar Pradesh in early 2022 is bound to singe India’s national assembly and, for once Modi is on the defensive, a role that he performs with pain and without much practice.

Ever since he won his first election in Gujarat in December 2002, wading triumphantly through the blood of a thousand riot victims, he is just too used to occupying the high ground. He scores superbly as the hunter but how he fares as the hunted is yet to be seen.

A large school of psychologists insists that overbearing autocrats and bullies often break down under pressure, though, in the process, they wreak a terrible revenge on the people. Be that as it may, one has, however, to be doubly cautious lest a Godhra or a Pulwama suddenly emerge. Both appeared out of the clear blue sky and showered unforeseen political capital on him. Incidentally and coincidentally, both were man-made tragedies that future detective-historians may succeed in unravelling facts that we could not. The limited point here is that if the next budget session is impaled in the same manner in which the regime spiked the two preceding sessions, it may rebound on Modi.

A populace hooked on to astrology is quick to decipher ominous harbingers, even those of a regime-change.

Modi ensured through his cohorts that the Monsoon Session of parliament was ruined by obstinately refusing to discuss (seriously or even at all) the Pegasus spyware scam that the Supreme Court later pulled him up for and the farm laws that he had soon to gulp down with some holy liquid of his choice.

The third refusal to discuss was about the worrisome price rise, but this issue obviously continues to scald him, despite a rather impervious epidermis.

The Winter Session that has just ended was also deliberately devastated by declaring on the very first day that 12 members of the Rajya Sabha were suspended for the entire session. This act was in the hallowed tradition of absolute highhandedness and quite unprecedented. It served his purpose and the opposition was caught in the cleft – for it could either tamely accept this stinging humiliation, the legality of which was questioned, or disrupt the proceedings and be accused of gross ‘unparliamentary behaviour’.

The opposition, that only Modi’s haughtiness could manage to unite so rapidly, chose the latter option that displayed their self-respect but attracted adverse public criticism. To guarantee the latter, parliament censored, rather heavily and mercilessly, news and audiovisual ’feeds’ to the world outside.

It continued to ban the entry of the media inside the house on grounds of COVID-19, even when every other public place was opened up. The telecasts aired by the single and monopoly television channel was ‘edited’ on real time basis by an efficient ‘camera control unit’ that showed only regime-friendly scenes of normalcy and blacked out and muted the thunderous daily demonstrations inside. It released only a few bites of MPs rushing to the well of the house when these could help the treasury bench in painting the protests that it had provoked as despicable black. The anyway-compliant (or threatened) Indian media was easily co-opted to sing the regime’s chorus that such unruly disruptions were damaging the nation – without focusing on the provocations, indignities and sheer injustice inflicted, that left no option other than protest.

Modi’s dream of running the country all on his own without the nuisance of elected parliamentarians cramping his style is working to his full satisfaction. The prime actors of this sansad–mukt Bharat (‘parliament-free’ India) are even looking forward to rewards, but if the Budget Session is also log-jammed, the portents that would emerge will surely not be so user-friendly.

In the 21st century, parliament many never reach the record of 120 days of work (which implies about 170 days a year, when intervening weekends are added) that it did during the ‘dynastic period’ of 1952-1972. But, it will certainly not permit Modi to impose his Gujarat model of just 30 days of sessions a year – that too, only to rubber-stamp his legislation and listen with rapt attention to his monologic ‘Mann ki Baat’.

As it is, one chuckles every day to hear almost every poor minister punctuating his or her statement in parliament with hymns to the glory of the only worthy prime minister that India has been lucky to have. Big brother’s watch and the sense of terror is so all pervasive that many friends and former service colleagues deliberately avoid talking to (or even exchanging Anglo-Bharatiya pleasantries with) a marked critic of the PM, even in the lobby or the open central hall of parliament. Thanks to such positive ‘unwelcomes’ and the daily walkouts or adjournments of the house by the chair, one has spent more time of the Winter Session at the feet of the Mahatma’s statue on the lawns of Sansad Bhavan, than within the cold confines of the controlled territory.

Giving moral support to the 12 victimised MPs and taking in a bit of the Delhi sun amidst the gloomy chill were both better than giving and receiving cold stares.

But it is doubtful whether Narendra Modi would allow even this ‘normalcy’ to continue. True, he repealed the farm laws which may indicate that he has started factoring in bad publicity and negative vibes of his foreign critics – in government, media and civil society. His strategy may be to reach out to powerful but non-political opponents, ‘over the top’ of institutions like the media or parliament. But his continued refusal to engage with the media (through non-rehearsed press conferences) and with parliamentarians actually indicates his genetic aversion to others who have direct access to vox populi. It also reinforces that he cannot handle instant responses.

Nevertheless, one must give credit to him because even when all his surgical strikes have failed, he does not stop planning still bigger and more viscous hits. People are already whispering that he may use Omicron to postpone the state elections or skew the campaign in his favour by restricting his challengers from addressing mammoth gathers. That he is not willing to mess up the existing equilibrium, even though it is not very favourable, is clear from the manner in which he kept on hold bills on bank privatisation, cryptocurrency and the raising the age of marriage.

Yet the manner in which he pulverised the opposition to rush through his bill on linking electoral rolls with Aadhaar cards in just a few minutes surely reveals that he is getting unsure of election results and would like to play around with voting rights. In any case, it would be a mistake to ever imagine that he will ever give up power if defeated at the polls in Uttar Pradesh or even at the next parliament elections, when (and if) they are held.

It would, therefore, be a bigger mistake if we do not to utilise these breathing spaces that we still have at present to get together and anticipate where and how he may attack next. We have, thus, not suffered just one winter of discontent – we are actually heading to long winters with no end in sight. Nothing is impossible where Narendra Modi is concerned, though his competence comes nowhere near his talk or his image of himself.

Thus, whether Indians realise it or not, the peril that lies ahead is much more than dealing with just an over-ambitious desperado – it is contending with one whose sheer amorality, vindictiveness and ruthlessness can put many a tyrant to shame.