Parliament Logjam Continues, Opposition Asks President Not to Give Assent to Bills Passed

Opposition MPs marched outside parliament with placards reading "save farmers, save workers, save democracy" to protest against what they called the unconstitutional passage of Bills. New Delhi: Parliament continued to face a logjam for the third consecutive day, when all opposition parties, barring the Bahujan Samaj Party, Biju Janata Dal and YSR Congress, got together to boycott the Rajya Sabha session which ended on Wednesday (September 23).

Opposition MPs marched towards Dr. B.R. Ambedkar’s statue with placards reading “save farmers, save workers, save democracy” to protest against what they called the unconstitutional passage of the farm Bills and the tabling of the labour code Bills on Wednesday morning.

The dharna by opposition members lasted the whole day, even as the Lower House dominated by the ruling National Democratic Alliance members went ahead and passed eight Bills, including the contentious labour code Nills. The Rajya Sabha passed 15 bills altogether while the opposition boycotted the sessions over the last two days.

At 5 pm, an opposition delegation met President Ram Nath Kovind to request him to send back the Bills to the Rajya Sabha. Senior Congress leader and Rajya Sabha MP Ghulam Nabi Azad, while addressing the media after the meeting, said that the manner in which all these Bills were passed was “unconstitutional”.

He said, “The opposition is not responsible for the fiasco in the upper house. The opposition kept requesting the deputy chairperson of the house (Harivansh) to permit it to move amendments to the farm bills on Sunday. Some asked that the bills should be sent to a select committee (for review), while many asked for a division of votes. But the deputy chairperson simply didn’t listen to us and passed the bills in a hurry.”

He also said that the ruling alliance MPs were in a minority when the Bills were hastily passed, and that the deputy chairperson acted like a “BJP member” when he should have acted like a referee to conduct the house according to rules.

Azad said that the delegation informed the president about how rules were flouted and requested him not to give his assent to the Bills, which have been sent to him for approval.

“I would like to say that the opposition is not responsible for the fiasco that followed in the Rajya Sabha after the unconstitutional passage of farm Bills. The government is responsible for it,” he said.

Ahead of the meeting, the delegation released a letter that it submitted to the Rajya Sabha chairman to oppose any discussion or passage of the Bills tabled today.

“We urge you not to have the following three bills passed today in the absence of Opposition parties in the House. 1.The Occupational Safety, Health and Working Conditions Code, 2020 2. The Industrial Relations Code, 2020 3. The Code on Social Security, 2020,” the letter said.

“These bills affect the livelihood of crores of workers across the country. It will be a great blot on our democracy to have these bills passed unilaterally today,” it added. 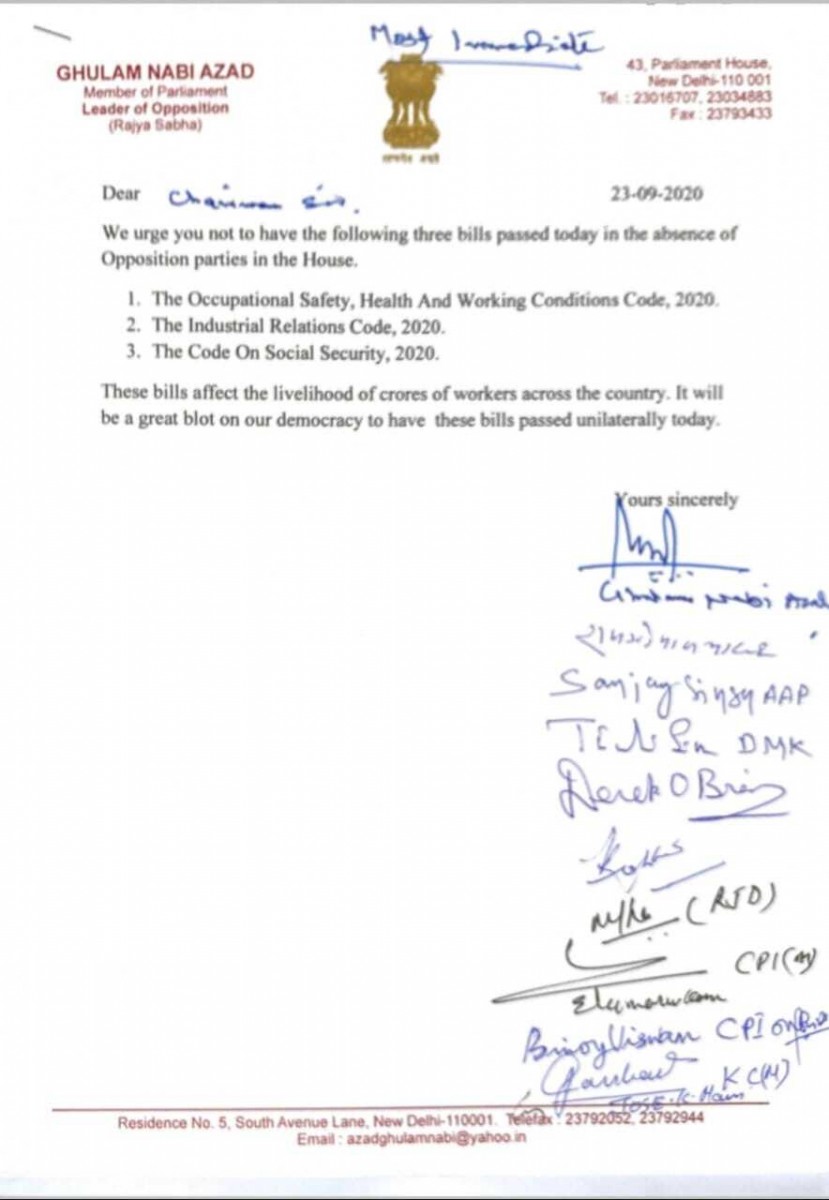 Evidently, chairperson M. Venkaiah Naidu did not pay any heed to the request.

Amidst criticisms that by boycotting the sessions, the opposition ended up giving the government a free way to pass all the legislations, Rajya Sabha MP and Punjab Congress leader Pratap Singh Bajwa said, “What would you do when neither the government nor the chair of the house listens to the opposition voices? They left us with no other option.”

He added that the unilateral functioning of the parliament is “a part of a well-calculated government’s strategy to create conditions to force the opposition into a situation where it doesn’t have any other option but to walk out of the house”.

Speaking to NDTV, he said that the opposition now plans to knock the doors of the courts and hit the streets.

Although the BSP kept a distance from the larger opposition in its protests, its MP Danish Ali made his party’s opposition clear. He referred to the Sunday’s proceedings as “a blot on Indian democracy” and said that the government found an opportunity in disaster [referring to the Prime Minister Narendra Modi’s statement urging citizens to find avsar (opportunity) in apada (disaster, in this case the coronavirus pandemic)] by using the monsoon session in its favour and unilaterally passing all the contentious bills without any debate.