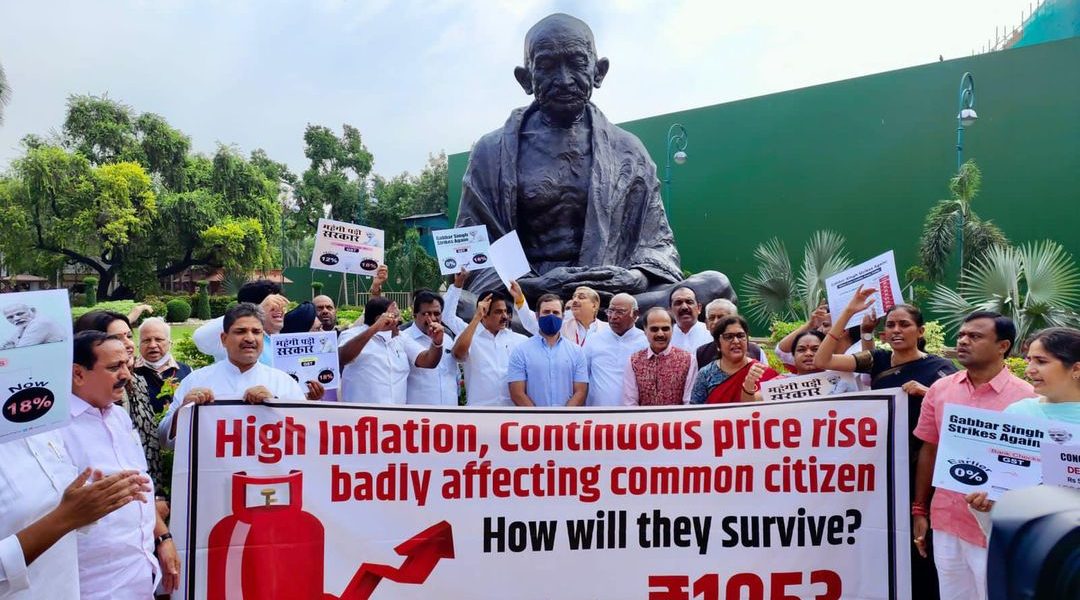 New Delhi: For the second day in a row, opposition parties today, July 19, continued their protests in both houses of Parliament over rising prices and a hike in the Goods and Services Tax (GST), forcing adjournments.

Congress leader Rahul Gandhi, meanwhile, accused Prime Minister Narendra Modi of running away from a discussion on these issues in Parliament.

Opposition leaders also staged protests in the parliament premises and raised slogans against the Union government. Inside both the Lok Sabha and Rajya Sabha, members raised placards and shouted slogans, seeking a discussion on the issues.

The protesting MPs were joined by Rahul Gandhi who, while taking a dig at the recent attempts by the government to silence the Opposition by terming certain words “unparliamentary”, said Prime Minister Modi’s refusal to answer questions on the issues of price rise, the hike in GST rates and the depreciating value of the rupee was also “unparliamentary”.

Gandhi tweeted, “Running away from discussions and questions in Parliament is most ‘unparliamentary’, Prime Minister ji”.

“Rupee crossed 80 (to the dollar). The gas cylinder man is asking for Rs 1,000. There were 1.3 crore unemployed people in June. Now, GST burden on food grains too. No one can stop us from raising public issues, the government will have to answer,” the rest of his tweet read.

“No matter how many words the Prime Minister tries to silence by saying ‘unparliamentary’, he will have to answer,” Gandhi posted on Facebook.

In the Facebook post, Gandhi elaborated on the price rise issue, saying, “From now on, 5% GST will be charged from the public on packaged products like milk, curd, butter, rice, pulses, bread.”

He added, “Daily food items have become expensive, the (gas) cylinder costs Rs 1,053, but the government says ‘Sab changa si‘ (all is well). Meaning that this inflation is the problem of the people, not of the government.”

The Congress leader further alleged that Prime Minister Modi, who had made rising prices a major talking point when he was in the Opposition, has now himself created a “deep quagmire of problems, in which people are getting drowned every day”.

Gandhi added that he and the entire Congress party stood with the people “against every atrocity being committed on you by the government. We will strongly raise this issue in Parliament.”

In both houses, too, Opposition members continued to raise the issue of rising prices, high inflation and taxes.

Meanwhile, Aam Aadmi Party (AAP) MPs from both the Lok Sabha and Rajya Sabha held a separate protest near the Gandhi statue against the Union government for not giving permission to the party’s national convener, Arvind Kejriwal, to travel to Singapore for the World Cities Summit.

As soon as the Lok Sabha assembled in the morning, Opposition leaders began raising slogans against the rising inflation and increase in prices of essential commodities. Some of them also raised placards, which led speaker Om Birla to say.  “As per rules, it is not allowed to bring placards inside the house”.

As protests continued, he adjourned the house till 2 p.m.

Earlier, Congress leader Manickam Tagore had declared, “Today, the Opposition, led by the Congress, will demand discussion on the urgent issue of continuing, intolerable increase in prices of essential commodities,” hoping that Parliament would “work and discuss people’s issues”.

Several other Opposition leaders, too, had demanded a discussion on the subject.

Further, AAP Rajya Sabha MP Raghav Chadha submitted a suspension of business notice seeking a discussion on the committee constituted by the Union government on the issue of Minimum Support Price (MSP).

“Committee on MSP constituted by GoI comprises BJP supporters and supporters of the three black laws. Punjab, called the food bowl of India, hasn’t been allowed governmental representation in this committee. Government not serious about legal guarantee for minimum MSP,” he said.

“After the announcement by PM Modi, the government has constituted a committee to deliberate on farmers’ issues like the need to promote organic farming, making MSP effective, and crop diversification. The government is being transparent about it,” he said.

Tomar alleged that the Opposition members were “not concerned about the issues facing the farmers or the common man. They’re just interested in playing politics, in a bid to stall the progress and welfare of the public. PM Modi and BJP are committed to ensuring benefits to the farmers.”

In the Rajya Sabha, too, proceedings were adjourned in the morning, before the house could transact any business, due to protests by Opposition members on the price rise issue as well as their demands for having a discussion on the Union government’s Agnipath scheme for contractual recruitment into the armed forces.

Earlier, Rajya Sabha chairman M. Venkaiah Naidu had rejected the notices given by Leader of the Opposition Mallikarjun Kharge and other members for the setting aside of the day’s business to debate these issues.

When the house assembled, Naidu, referring to the notices, said he was “not admitting them”. He insisted that he had no problem having discussions on price rise and other issues. But, he said, they would have to happen later and under a different rule.

This did not satisfy the Opposition members, who demanded that the discussion be taken up today. They then resorted to protests and sloganeering.

Naidu then declared that nothing would go on record and adjourned proceedings till 2 pm. As protests continued even after the house re-assembled, proceedings were adjourned for the day.