The opposition will need to think harder, beyond the usual idea of fielding a "secular" candidate, to defeat the BJP’s messaging if it decides to contest. 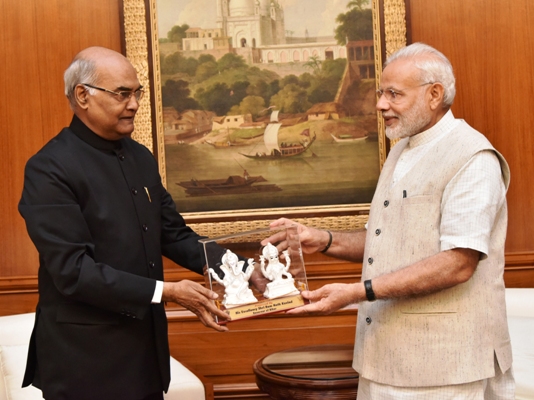 Kovind, currently Bihar’s governor, will be India’s second Dalit president if elected in the upcoming presidential elections scheduled for July 17. To most BJP insiders, Kovind’s nomination was “unexpected” as his name had hardly been discussed in the run-up to the elections, even as the possible candidature of party patriarch L.K. Advani and Jharkhand’s governor and adivasi leader Draupadi Murmu did the rounds.

“He has always been a low-key figure. In most meetings of Uttar Pradesh’s BJP unit, he maintained a conspicuous silence. He was never a significant public figure,” Kuldeep Dubey, a BJP leader in Uttar Pradesh told The Wire.

“Yet his political career is marked by important positions in the party. That he held significant official positions shows that he has always been in the good books of top BJP leaders. Nomination by the party for the presidential post is yet another reward for his dedication to the party,” said Dubey.

Born in 1945 in Path village of Derapur block of Kanpur, Kovind has indeed been an asset to his party, and provided support to it in areas where the saffron party has traditionally been considered weak.

A lawyer by profession, Kovind was once an executive assistant to former prime minister Morarji Desai, before joining the BJP. He served as an advocate in both the high court and the Supreme Court, and helped his party take legally tenable political positions, especially as an unofficial legal advisor to the Uttar Pradesh government during Kalyan Singh’s and Rajnath Singh’s governments in the state.

During his two-time Rajya Sabha tenure from 1994 to 2006, Kovind, who belongs to the Kori sub-caste, also served as the BJP’s Scheduled Castes Morcha chief, and was also one of the leaders to chalk out the party’s creative strategy – to work among non-Jatav Dalits – to make inroads among SC populations, then considered the preserve of the Bahujan Samaj Party. This strategy has worked well for the BJP, if recent Dalit voting patterns are studied in various state elections since 2014.

As an MP, Kovind served as an important member from the saffron party in parliamentary committees on the welfare of SCs/STs, law and justice, social justice and empowerment, home affairs, petroleum and natural gas. He also represented India at the UN General Assembly in 2003, during the Vajpaye government, where he made interventions on the issue of childcare and showed concern over the declining budget for peacekeeping missions.

After a brief stint as one of the national spokespersons of the BJP during UPA-II – in 2010 he was quoted by IANS as saying Modi was a “law-abiding chief minister” and the party “was proud of him” – he was appointed as the governor of Bihar three years ago by the Modi government. His rise is considered quite meteoric in the BJP as the most important organisational position he held before rising to national prominence was that of the UP state unit’s joint secretary – an office he served without any controversy but also without any noticeable work.

Political analysts believe that Kovind’s nomination serves as a sharp political message to the opposition parties.

“In the days of PR-driven campaigns, the BJP has chosen a leader who barely has any media presence. We knew the party may choose between a Dalit or an adivasi leader. But choosing Kovind over other prominent Dalit faces like Ram Shankar Katheria or Bizay Sonkar Shastri or Ramapati Shastri – all UP-based Dalit leaders – is an important message to not only the opposition but also to the party cadres,” Pankaj Prasun, a Kanpur-based journalist, told The Wire.

BJP insiders feel that the top leadership has clearly indicated that only leaders with non-controversial, non-flamboyant personalities will be considered for constitutional posts in future. Political analysts believe that the tactic seems deliberate – to corner the opposition, which has attacked the government for appointing Hindutva hardliners in influential positions.

Kovind has always tried to sail on two boats, and has carefully stayed away from the media glare. His nomination suggests that his cruise has been successful.

He is considered very close to the top leaders of the Rashtriya Swayamsevak Sangh (RSS), but he has never been a member of it. As the national spokesperson, he remained calm in debates, yet toed the Sangh’s line. Inhis first remarks to the media after his nomination, he thanked not just Modi and the BJP but also the NDA and the ‘vichar parivar‘.

For instance, when a national debate on the Ranganath Misra Commission report raged in 2010, Kovind argued that “Islam and Christianity are alien to India,” and therefore Muslims and Christians should not be given any quotas in government jobs. But he was quick to buttress this chauvinist observation with a socio-economic argument. Claiming that Dalit converts get much better education in “convent” schools, he said that implementing the Misra commission report, which recommended 15% reservation for all minorities in jobs, education and other welfare schemes because of their poor socio-economic indicators, would be “unconstitutional” and put Scheduled Caste groups (i.e. Dalit Hindus) at a disadvantage.

Kovind was touted as the Dalit face of BJP during Rajnath Singh’s government, but the Brahmin lobby within the party scuttled his rise, claimed a BJP leader in UP. “Given his introverted personality, Kovind soon realised that it may suit his interests to help the party legally and organisationally instead of trying to become a public figure. He has proved himself to be a pliant man in the party, something which the Union government wants in the top constitutional post,” said the BJP leader, who did not wish to be named.

Impact on the opposition

The announcement of a Dalit candidate may put the opposition, which has been manoeuvring to field a joint candidate against the BJP’s nominee for over a month now, in a tight spot. With  the BJP only around a few thousand votes short in the electoral college, the party is confident of finding support from other parties after Kovind’s nomination.

“Unlike other Dalit leaders who have cultivated a good media image, Kovind is known to be a grassroots leader, especially among educated Dalits in UP. I feel that this an important step forward by the BJP to join forces with marginalised communities and create what they call a sarva samaj,” scholar Badri Narayan told The Wire, adding that the BJP has represented non-Chamar Dalits much more than any other party and has a vibrant movement among many groups in the recent years.

That Kovind belongs to the Kori caste group too is an additional advantage for the BJP. The saffron party has for long tried to build a base among SC groups other than the Chamars, who have been staunchly behind the Mayawati-led BSP.

The BJP was successful in forging a successful upper caste-non-Chamar-non-Yadav OBC coalition to win an unprecedented majority in the recently UP assembly elections. Kovind’s candidature helps fill in the gaps that the BJP has left open after the victory.

“While the BJP has been trying to get the support of Dalits, many among the Dalits believed that the top posts after it wins would go to the party’s upper caste cadre. Yogi Adityanath, Devendra Fadnavis or Manohar Khattar all came from the Sangh or Hindutva fold and were upper caste saffron leaders.  They mostly resorted to political tokenism when it came to rewarding Dalits. Kovind’s candidature is a big step forward,” Harish Wankhede, assistant professor at the political science department in JNU, told The Wire.

Wankhede added that the RSS had been successfully representing Dalits in the party mainstream, something which the secular forces could not do.

“The party’s political messaging to Dalits is clear – that the BJP is anti-minority but Dalits are an integral part of the larger Hindu society. With this direct message, it has left the Dalits to choose between the BJP and other parties,” said Wankhede.

In Modi’s three years as prime minister, the most significant opposition to his rule has come not from the political class but from the Dalits, who have risen against his regime over the saffron extremities against scheduled caste groups.

Be it the movement led by Jignesh Mevani over the brutal violence by gau-rakshaks in Gujarat last year, the Dalit mobilisation following the death of Rohith Vemula, or the more recent agitations by the Bhim Army in UP’s Saharanpur over attacks on Dalits by Thakur mobs, or the Dalit agitation in Maharashtra last year over the razing of Ambedkar Bhawan – the ferment in the community has left the BJP unnerved.

“Kovind’s nomination will inevitably be seen as a measure to placate a large section of Dalits, who look forward to greater participation and representation. [The party] has to wash off these stains,” said Wankhede.

The candidature of the introverted Kovind not only serves as a smart manoeuvre by the BJP against the opposition, which had been showing some solid signs of unity as the presidential election came closer, but is also a clear message to the BJP’s rank and file to stay away from unnecessary controversies. At the same time, his nomination will help the party tackle an intensifying movement, especially among educated Dalits, against saffron forces across the country.

Putting up a joint candidate against the Dalit BJP nominee is easier said than done.  After all, Kovind brings to the table not just a marginalised caste background but also a clean image, solid if not spectacular (compared, at least, to K.R. Narayanan) educational accomplishments, proven experience, as a governor and MP, in handling constitutional matters, and a disciplined political career devoid of the usual excesses.

Not surprisingly, his candidature has left the opposition split. The Janata Dal (United), Telangana Rashtra Samiti and  YSR Congress have already declared their support while others are yet to take a decision. The BJP, of course, has called for a consensus among the parties but seems well placed to win the election if at all the opposition decides to field a candidate.

The opposition will need to think harder, beyond the usual idea of fielding a “secular” candidate, to defeat the BJP’s messaging if it decides to contest.

For now, however, the political narrative about the president’s election clearly favours the saffron party. By nominating Kovind, the BJP has not only signalled a socially inclusive strategy but has also managed to pick a consummate party insider – much like the Congress’s choice of Pratibha Patil in 2007 – for the country’s top constitutional job – a post that may largely be ceremonial but which remains, within the Indian polity, a counterpoint of sorts to any prime ministerial or ruling party excess.