Doval held a meeting with the top brass of the Delhi Police at the office of the Deputy Commissioner of Police (northeast) in Seelampur. 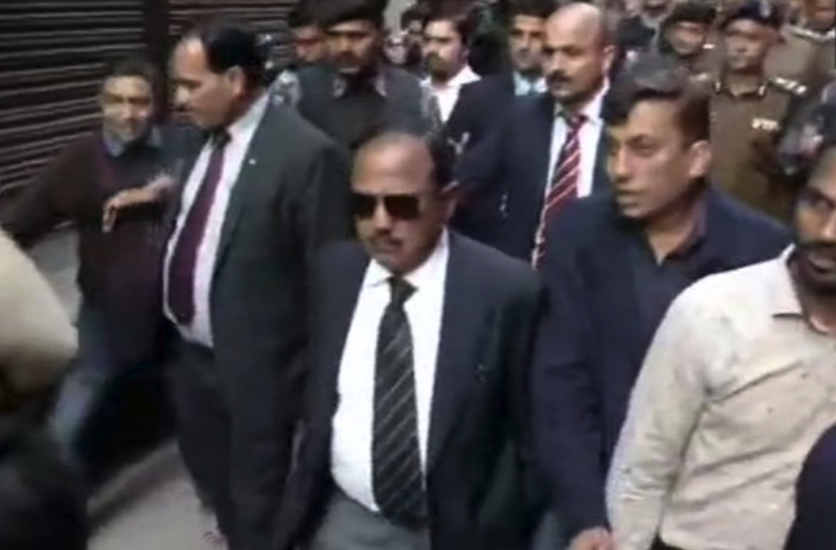 New Delhi: The situation in the riot-hit north east Delhi “is under control,” National Security Advisor Ajit Doval said after he held a meeting with senior officials of the Delhi Police and visited some of the affected areas on Wednesday afternoon.

However, reports on news channels which tailed Doval during his ‘tour’ showed that the NSA had to hear complaints from people who proved insistent in letting him know that they thought that the assaults on Muslims were being directed by Union home minister “Amit Shah and the RSS.”

In one particular clip from Aaj Tak, uploaded by Twitter user Jitender Singh, a man in a skull cap is seen speaking to Doval. While Doval himself nods his head, the policeman accompanying him seem keen to quieten the man.

At least 22 people have been killed and over 200 injured in communal violence that broke out in northeast Delhi three days ago. Jaffrabad, Maujpur, Babarpur, Yamuna Vihar, Bhajanpura, Chand Bagh, Shiv Vihar are among the areas mainly affected by the riots.

Doval, who has been tasked with checking the violence, held a meeting with the top brass of the Delhi Police at the office of the Deputy Commissioner of Police (northeast) in Seelampur.

Also read: At GTB Hospital, Families of Delhi Riot Victims Wait for Bodies to Be Released

This was Doval’s second visit to the office. He had visited the office and met senior officers on late night on Tuesday.

After the meeting, Doval went Jaffrabad and Maujpur to take stock of the situation. He interacted with locals and assured them about ensuring peace in the area.

“The situation is under control and people are satisfied. We have confidence in law enforcement agencies. Police is doing their job and is alert,” he told reporters.

Note: The story has been updated to include details on NSA Doval’s interactions with people.