The All India Kamboj Maha Sabha, which installed the statue three years ago, said the Union government would only allow the statue if there was no revolver. 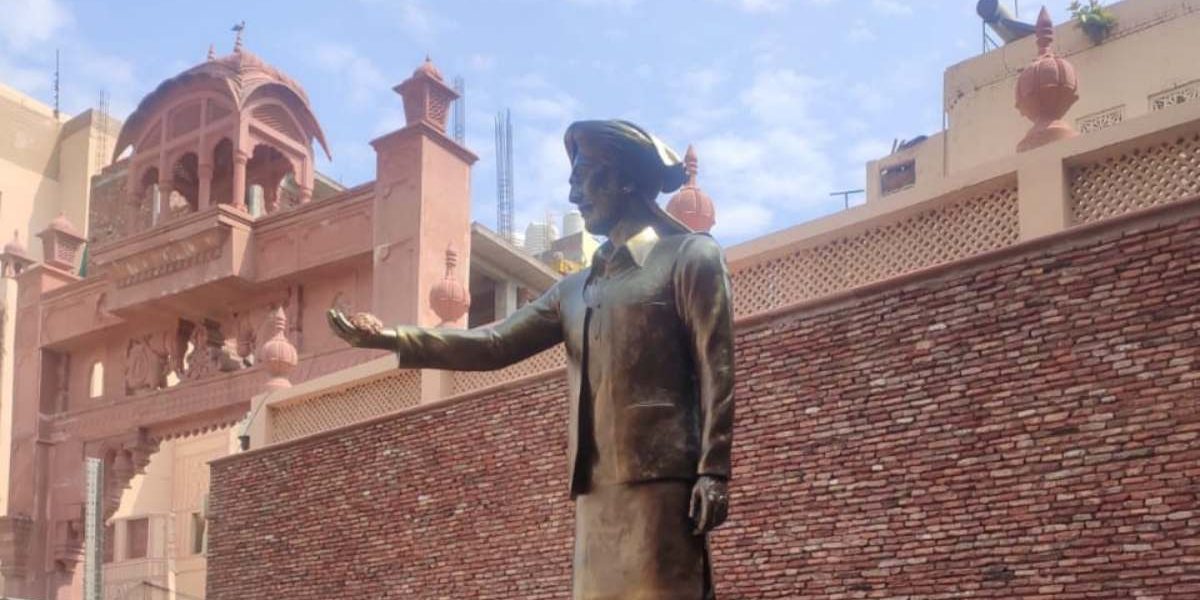 Jalandhar: As historical inaccuracies at the newly renovated Jallianwala Bagh continue to hit headlines, a pertinent question has arisen: Has there been a deliberate attempt to twist the revolutionary pasts of the martyrs?

One of the many changes at Jallianwala Bagh garnering attention is the statue of Shaheed Udham Singh. This statue, though, was installed three years ago – but is being noticed now as photos of the revamped site circulate on the internet.

The statue was installed by All India Kamboj Maha Sabha, as part of the centenary of the Jallianwala Bagh incident, in 2018. It was inaugurated by the then Union home minister, Rajnath Singh. Udham Singh belonged to the Kamboj community. 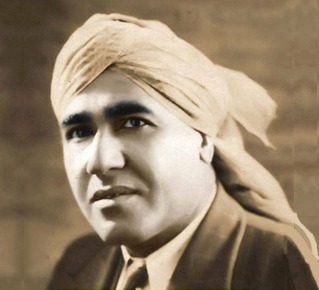 In the bronze statue, Udham Singh is holding mud instead of revolver in his hand, and his turban is loosely tied. As photos of this statue went viral on social media, the lack of the signature revolver has led to raised eyebrows.

Whose decision was it, to create the statue without the revolver? According to the All India Kamboj Mahasabha, the onus lies with the government. They had been dreaming of installing an Udham Singh statue for decades, they say – and so were willing to mould it to the government’s liking when the chance finally arose.

Talking to The Wire from Mohali, Vikram Kamboj, the son of Nanak Chand Kamboj, former president of All India Kamboj Maha Sabha, said, “It took over 30 years for my father to get the statue of Udham Singh installed at Jallianwala Bagh. He wrote several letters to all the ex-prime ministers, but all that we got in return were letters acknowledging our demand. Finally, when our community decided to make a statue on its own, the government informed us verbally that it should not show Udham Singh holding a revolver in one hand, as that would send a wrong message. So, our community thought it wise to construct a statue showing Udham Singh holding mud in his hand, as he had vowed to avenge the Jallianwala Bagh massacre and assassinated Lt Governor of Punjab Michael O’ Dwyer in Caxton Hall, London. It was Dwyer who had sent troops to Jallianwala Bagh.”

Also read: By Erasing Traces of the Massacre, the Jallianwala Bagh Memorial Becomes a Tourist Spot

Vikram said that the government considers Udham Singh to be a ‘Ghadarite’, who joined the Ghadar movement and became a revolutionary freedom fighter. “This is the reason why you will not find ‘Shaheed’ written before the names of Udham Singh, Bhagat Singh and others at the newly renovated Jallianwala Bagh. In fact, my father approached every leader to install Udham Singh’s statue in parliament. However, the government never responded positively. The fact is that all political parties have double standards when it comes to accepting Udham Singh, Bhagat Singh and others as martyrs,” he added.

Vikram’s brother Deepak Kamboj, who lives in the US, said that while he agrees Udham Singh’s statue is wrong, they had no other option. “It was Bobby Kamboj, from our community, who built the statue. We have the original photos of Udham Singh which can be used to construct a new statue. But the question is who will change it, when the government does not even consider Udham Singh as a martyr.”

“The efforts were made by the All India Kamboj Maha Sabha, but after the death of my father, it was Bobby Kamboj from International Sarv Kamboj Samaj who approached Rajnath Singh due to his affiliation and built the statue,” Deepak added. 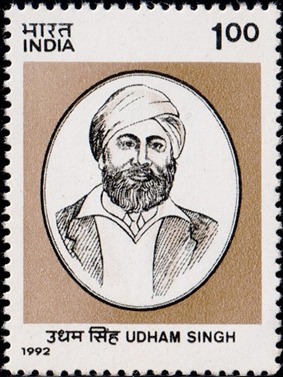 Stamp released by the Union government in 1992 in the memory of Udham Singh.

Deepak said that history cannot be distorted, and all martyrs should be called ‘shaheed’. He also clarified that they do not want any publicity and are a non-political group dedicated only to Udham Singh’s legacy.

Notably, it was following Nanak Chand’s efforts that the ashes of Udham Singh were brought back from England. Nanak Chand approached then Congress MLA Sadhu Singh Thind from Sultanpur Lodhi constituency of Kapurthala district in Punjab, who was instrumental in repatriating the ashes in 1974. Nanak Chand died in 2016.

In his letter, Kapoor gave 11 suggestions including the demand to remove the murals on the entrance, redeveloping ‘Amar Jyoti’ in front of the street at the same place, redeveloping the ‘Shaheedi Khu’ (Martyrs Well) as it was earlier, and constructing an ‘all religion worship place’, where Sri Guru Granth Sahib, Bhagwad Geeta, Quran Sharif and the Bible can be placed in the memory of the martyrs.

Kapoor demanded that the martyrs’ kin should be provided ‘Tamar Pattar’, certificates and facilities while a ban should be imposed on eatables inside the Jallianwala Bagh premises. “We have also strongly demanded that the government should prefix the title of ‘Shaheed’ before the names of Udham Singh, Bhagat Singh and all Jallianwala Bagh martyrs. The ‘wall of martyrs’ should also explain the stories of Jallianwala Bagh martyrs and carry their pictures, while the ‘pillar of shooting’ where General Dyer stood and killed thousands of people should be redeveloped,” he said. A nine-member team of the Desh Bhagat Yadgaar Committee, Jalandhar, set up to preserve the legacy of the Ghadar movement, visited the newly renovated Jallianwala Bagh to see the changes for themselves. The members registered their indignation and resentment over the work done at Jallianwala Bagh and demanded its restoration to its original form.

After visiting the memorial, Ajmer Singh, president of the Desh Bhagat Yadgaar Committee, and the group’s general secretary Gurmit Singh wrote a letter to the prime minister and chairman of Jallianwala Bagh National Memorial Trust, president of India, secretary, Ministry of Culture Affairs and chief minister, Punjab highlighting inaccuracies at the site. They demanded that in the light of the havoc played with the spirit and history of Jallianwala Bagh, a committee of prominent historians should be constituted to set right the wrongs committed. Public bodies like the Desh Bhagat Yadgaar Committee should be involved in the deliberations, they added.

They lamented that the beautification of Jallianwala Bagh undertaken by the government has divested it of its historical heritage and reduced the memorial to a place of recreation.

Talking about the changes done at Jallianwala Bagh, the members said that murals displayed on the walls of its entrance reminds one of a festival and not of a place where more than 1,000 Indians were massacred by the British Army, when they were raising their voice against the Rowlatt Act.

Similarly, the well in which 200 persons lost their lives does not now evoke a sense of anger against the Raj, as it has been concealed behind a glass wall through which almost nothing is visible in daylight. Even the place from where the Army fired upon people has been wiped out and only a nondescript floor tile has been laid there. Earlier, this place had a raised, pyramid-like structure marking that spot.

Podcast: Jallianwala Bagh Redesign Is Insensitive, Insulting to Martyrs Who Were Killed

Desh Bhagat Yadgaar Committee’s cultural wing convener, Amolak Singh, said, “The government surely does not know that history is never beautified. History is preserved. The newly renovated Jallianwala Bagh does not inspire people. By constructing murals showing jovial faces in the alley, erasing the names of 62 Muslims from the light and sound show, the newly constructed lotus pond and writing Jallianwala Bagh at the entrance in Hindi first and Punjabi later, one can clearly make out how the BJP has tried to impose its right-wing ideology at the memorial.” He said that even Ghadar Party’s flag colours have been changed at the memorial. “Thankfully the two walls with bullet marks have been preserved, but they too have been redone in such a way that they lost the impact.”

The committee has been demanding that any attempts to change the historic look of the memorial to a tourist spot should be checked from time to time. “But despite all our efforts, Modi government succeeded in damaging the Jallianwala Bagh to further its agenda,” said Amolak Singh.