While the ministry website clearly mentions the highest education qualifications of Nityanand Rai and Ajay Kumar Mishra, two other junior ministries in the home ministry, it skips the details of Nisith Pramanik. The noticeable omission in the 35-year-old Pramanik’s profile comes in the aftermath of a controversy around discrepancies in his educational qualification as mentioned on Lok Sabha’s website and two affidavits submitted before the election commission of India in 2019 and 2021. The Wire had reported the discrepancies on July 8, the day Pramanik assumed office.

The noticeable omission of Nisith Pramanik’s highest educational qualification on the ministry of home affairs website.

He is the youngest minister in the Modi government and the first-ever Union minister from his home district, Cooch Behar, bordering Bangladesh in the northern part of West Bengal.

Choosing him as a deputy for home minister Amit Shah had surprised many Bengal BJP veterans because Pramanik had joined the party only ahead of the 2019 Lok Sabha elections. He was a TMC youth wing leader till 2018, when he was expelled for anti-party activities in the aftermath of the panchayat elections. He has 11 criminal cases against him.

It is being seen as the party rewarding him for ensuring the BJP’s victory in eight of the nine seats in his district in the recently-concluded assembly election. The party suffered a setback in all but four of the state’s 23 districts, though it was expected to challenge the ruling party.

On the MHA’s website, Rai profile says he has a BA (Honours) degree from R.N. Degree College of Baba Saheb Bhim Rao Ambedkar University, while Mishra’s profile states that he has attained a B.Sc. degree from Christ Church College and a bachelor of law degree from D.A.V. College, Kanpur University.

The Bhetaguri school has facilities for education up to higher secondary (class 12), but Pramanik’s election affidavits submitted before the ECI before the 2019 Lok Sabha election and the 2021 assembly election mentions that he had appeared in the secondary school exam from that school (class 10). Class 10 has been mentioned as his highest educational qualification in both his affidavits, while his Lok Sabha profile claimed he has a bachelor in computer applications (BCA) degree.

Soon after he took oath as the new junior minister for home ministry, TMC leaders from Cooch Behar district had pointed out that it was not possible for one to enroll for graduation without having passed higher secondary (class 12).

The MHA profile does not mention the BCA degree. However, the Lok Sabha profile continues to carry the same information.

The ministry profile also mentions Cooch Behar district of West Bengal as his place of birth. This comes in the aftermath of allegations that Pramanik originally hailed from Bangladesh. Congress Rajya Sabha MP Ripun Bora had even written a letter to Prime Minister Narendra Modi, citing media reports, that Pramanik’s remaining family members living in Bangladesh celebrated his ascent to India’s Union cabinet. Bora urged Modi to conduct a probe to find out Pramanik’s citizenship status.

Pramanik has so far made no comments on either of the controversies – regarding educational qualification and alleged Bangladeshi origin. Bengal’s senior BJP leaders, too, have declined to comment on the controversy, saying it was a matter to be addressed only by Pramanik or Central leaders.

“The minister should clear all the confusion around his educational qualification and citizenship status,” said Udayan Guha, a former TMC MLA whom Pramanik defeated by a thin margin of 57 votes in the recent assembly elections.

Pramanik’s candidature in the assembly election despite being a Lok Sabha MP was seen as a reflection of the BJP’s planned cabinet for Bengal in case they came to power. However, as the party fell widely short in numbers, Pramanik chose to give up his assembly membership. That assembly constituency, Dinhata, is to witness a bye-election, in which Guha will contest on a TMC ticket by all chances. 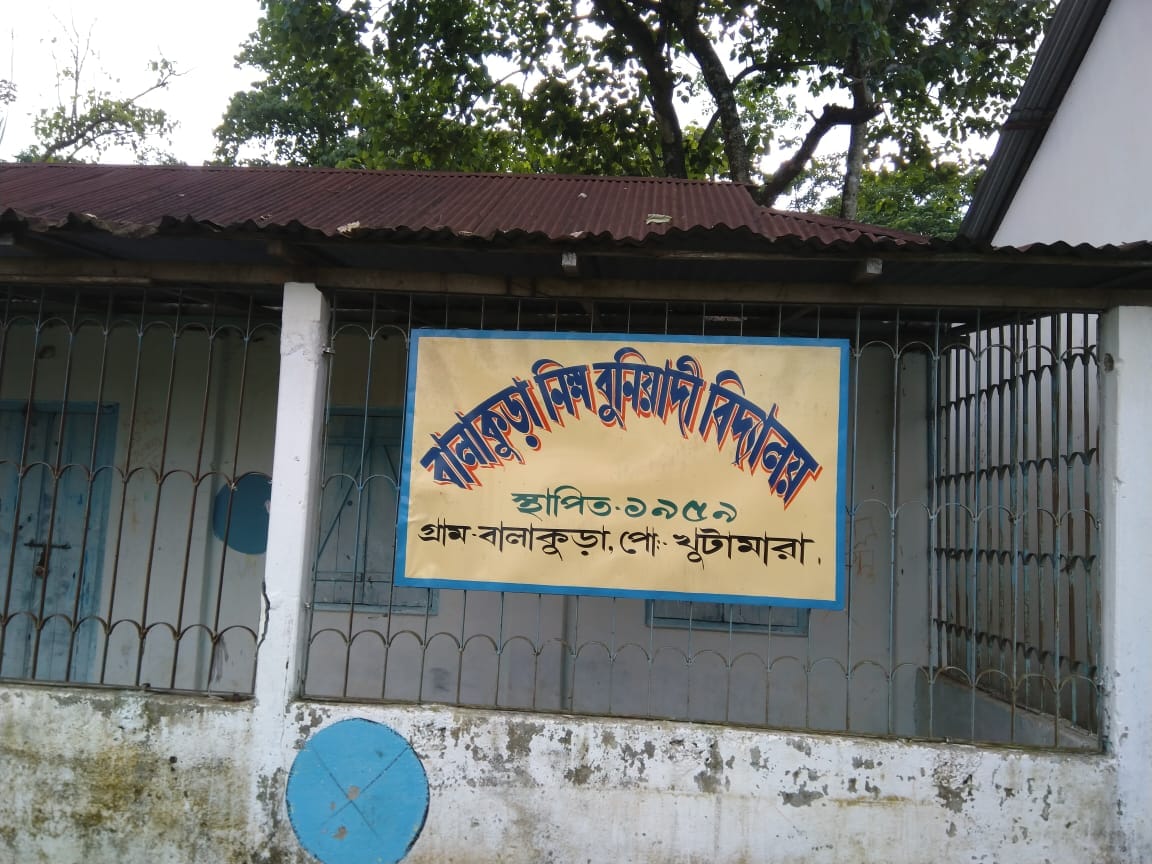 The school from which Nishith Pramanik is claimed to have obtained his BCA degree. Photo: Special arrangement.

Earlier, Guha had even uploaded a photo of the nondescript Balakura Nimna Buniyadi (junior basic) school from where Pramanik claimed to have obtained his BCA degree, asking if it was believable that a BCA course was conducted in that school. It teaches students up to class 5.