"Three new cases have been heaped upon me...I am in great distress and not in a good condition," Gogoi said. 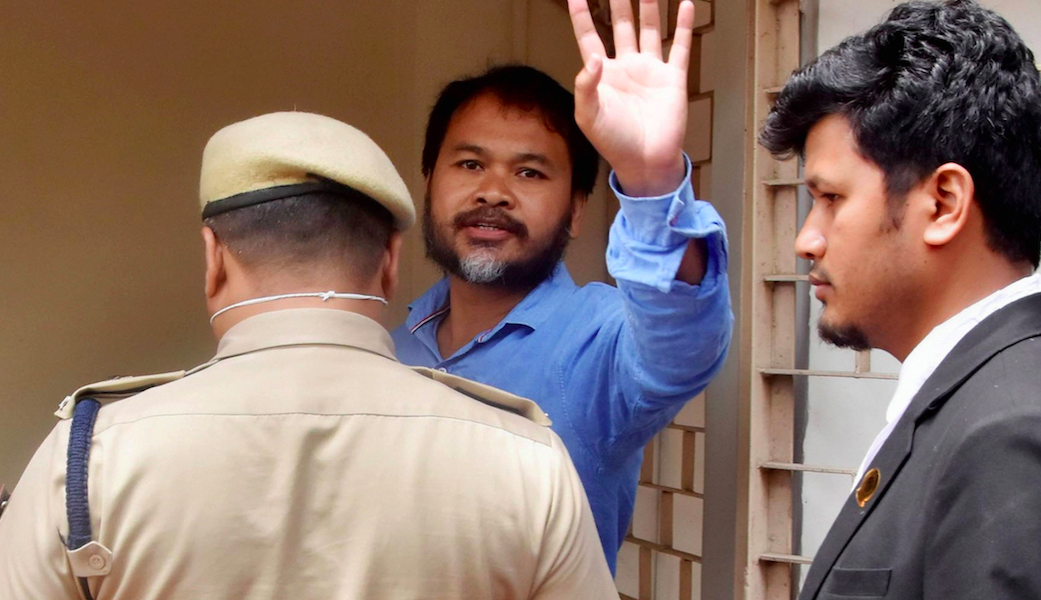 Guwahati: Peasant leader Akhil Gogoi has been sent to police custody till May 13.

The leader of the Krishak Mukti Sangram Samiti (KMSS) was produced at the special National Investigation Agency (NIA) court in Guwahati on April 23 in the same case in which the Gauhati high court on April 7 had stayed his bail.

The high court on April 7, had issued an interim stay order on the default bail which was granted to Gogoi in the NIA’s case in which Gogoi was accused of having Maoist links.

The NIA had failed to file a chargesheet within 90 days of Gogoi’s arrest, and on March 16, had sought an extension of another 90 days. The special NIA court had rejected the NIA’s petition back then.

The case (number 13/2019) was filed by the Chandmari Police station in the city in December over his alleged role in inciting anti-Citizenship Amendment Act (CAA) protests that became violent.

It should be noted that another case (number 289/2019) which was filed by Chabua Police station in Dibrugarh, again for his alleged role in inciting violence, was transferred by the state government to the NIA and based on which another new case (number 01/2020) was filed by the investigation body.

One of the members of Gogoi’s legal team said, “On April 16, the NIA submitted a production warrant petition to keep him with the agency. On the basis of this, the special NIA court instructed that he be produced at the NIA court in Guwahati on April 23. The case alleged that the tooth of the officer-in-charge of Chauba police station was broken during the agitation. The case record was supposed to be produced today but it did not arrive due to the lockdown.”

Thus the hearing on this case did not take place. Hearing in one of the cases against Gogoi has been scheduled for May 8.

While being produced at the NIA special court Gogoi told media:

“Three new cases have been heaped upon me. This is a political conspiracy to keep me behind bars. I am in great distress and not in a good condition.

I make an appeal to the state government that those from Assam who are stranded outside the state [due to the lockdown] should be brought back and also be paid money for their depleted financial resources.”

A memorandum was submitted to Sonowal.

Paresh Malakar, a civil rights activist and a co-signatory to the memorandum, said, “The chief minister listened to us and he read the memorandum. He said he would see what he could do. The purpose of the memorandum is to express our greatest worry about Akhil Gogoi’s health. He is weak and there are serious concerns over his vulnerability to COVID-19.”

Also read: Akhil Gogoi Could Be Arrested Again, This Time in a New Case

He was arrested by Sivasagar police from Guwahati Central Jail on March 19 for anti-CAA related violence for ‘illegal assembly of people in Sivasagar district’.

In early April Gogoi was taken away from Sivasagar jail by Dibrugarh police.

Immediately after Gogoi’s was granted bail by default, in March the NIA moved the Gauhati high court, challenging the special NIA court’s rejection. While the high court admitted the case, it did not pass any stay order on it back then.