Health experts have said that the COVID-19 pandemic is a humanitarian crisis and making it a "law and order issue" will not help tackle it. 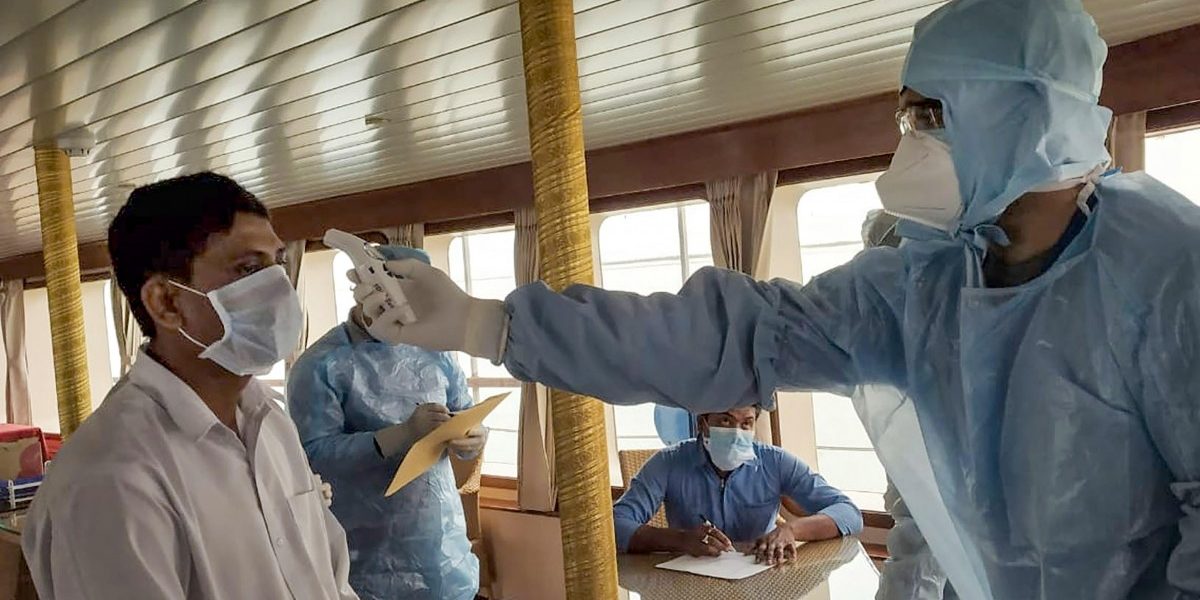 A health worker checks the temperature of a man. Photo: PTI

New Delhi: The Uttar Pradesh government on Wednesday passed an ordinance that prescribes a maximum punishment of life term if a person causes death by “intentional affliction” of COVID-19.

The Indian Express reported that section 24 of the Uttar Pradesh Public Health and Epidemic Disease Control Ordinance, 2020 states that “punishment for intentional affliction” of contagious disease with rigorous imprisonment of two to five years.

If a death occurs due to a person intentionally spreading infection, then he or she could be punished with a jail term ranging from seven years to life, and a fine ranging from Rs 3 to 5 lakh, as per section 26 of the ordinance.

The provision has come under criticism from health experts, who believe the ordinance leaves scope for “arbitrary and capricious state action. Experts have also said that the COVID-19 pandemic is humanitarian crisis and making it a “law and order problem” will not help tackle it.

According to a Times of India report, UP principal secretary (health) Amit Mohan Prasad said that the ordinance “has not been brought in with the purpose of penalising people as much as to encourage them to report to concerned agencies if they believe that they have been infected with Covid-19”.

The state chief secretary R.K. Tiwari said that the meaning of “intentionally here (in the ordinance) is the same as defined in legal terms”.

The ordinance also provides punishment for “concealment” and travel by public transport by a coronavirus patient, which ranges from Rs 50,000 to Rs 1 lakh and imprisonment for 1-3 years.

Prasad told reporters on Wednesday in Lucknow if a person is found to spread the infection in the community, he/she could be imprisoned for 3-10 years.

Also Read: Why Relying on Criminal Law Should Not Be the Answer to a Pandemic

All offences under this ordinance shall be cognizable and non-bailable. There is also provision for recovery of damage done to any property.

Further, Section 31(1) of the ordinance asserts, “No suit, prosecution or other legal proceedings shall lie against any person for anything, which is done or intended to be done in good faith in pursuance of this ordinance”.

There is also stringent punishment prescribed for attacks on healthcare workers. “There is a provision for punishment ranging from six months to 7 years, and fine ranging from 50,000 to Rs 5 lakh for assault or misbehaviour with health workers, paramedical staff, police personnel, sanitation workers or any corona warrior deployed by the government,” said state finance minister Suresh Khanna.

He also that spitting, incitement to attack, throwing filth on “corona warriors”, violating quarantine norms will attract provisions for punishment for 2-5 years and fine of Rs 50,000 to Rs 2 lakh.

Violation of quarantine rules could lead to a person being put behind jail for one to three years, with fines of Rs 10,000 to Rs 1 lakh. If anyone escapes from hospital, they could be punished with a similar penalty.

According to TOI, while the Centre has a similar law, UP’s ordinance has wider ambit and provides protection to doctors, paramedical staff, sanitation workers, police personnel, ASHA workers and any such person deployed by the government at the forefront of battling coronavirus from any kind of harassment or violence, including spitting and garbage thrown at them.

Speaking to The Print, former Union health secretary K. Sujatha Rao said the ordinance “is unenforceable because it is difficult to identify criminal intent by an infected person”, adding that it asymptomatic individuals could pass the infection unknowingly.

“There is a huge scope for arbitrary and capricious state action. Such laws are highly amenable to being misused by a biased investigating agency on grounds other than Covid like their caste, creed, religion, gender, etc,” she said.

It may be recollected that a few days ago, Uttar Pradesh chief minister Yogi Adityanath had accused those who visited the Tablighi Jamaat religious congregation in New Delhi of “hiding” their infection, which he said “is definitely a crime”. “And this crime has been done by those associated with the Tablighi Jamaat,” he said, adding action would be taken against them.

Like many other BJP leaders, he tried to pin the blame for the spread of the coronavirus solely on those who visited the congregation. It is in this context that experts fear the ordinance could be misused to target certain people.