Constitutionalists have condemned Vikas Dubey’s public execution, but the practitioners of realpolitik know the UP chief minister has inched his way ahead in the BJP national pack.

Mangled remains of a car at the demolished residence of notorious gangster Vikas Dubey, at Bikru village in Kanpur, July 10, 2020. Photo: PTI

Vikas Dubey’s violent end in an ‘encounter’ was cast in stone. From the humble paanwala in Kanpur Dehat to senior bureaucrats in Lucknow’s secretariat, no one seems surprised that death came swiftly and predictably to this man. Only a few ‘old school’ police officers find themselves taken aback at the brazenness of the ‘encounter’. The condemnation of police lawlessness, if any, remains muffled, whereas the voices of approval are loud and clear – that a much-needed retribution has been visited upon a cop-killer.

This should not be a surprise. As a nation, we have been seduced these last six years into getting enthralled over the use of violence at home and abroad. We applaud loudly when our rulers tell us they have the will to ‘punish’ all those who dare cast an evil eye on Mother India.

The Vikas Dubey encounter is particularly cathartic. Because of our frustration at not being able to punish the Chinese Army, the New Bharat crowd has unconsciously seized upon the Kanpur encounter as a wonderful affirmation of our capacity to unleash violence – and feel good about ourselves. Our satisfaction is both visceral and cerebral.

The contemporary requirements of strong leadership stipulate that violence must be demonstrative, loud and public. Almost like a hanging in a city maidan, the Kanpur encounter should remove any doubt about the regime’s capacity to mobilise ruthlessness, about its unwilling to adhere to any norms of reasonableness and civic virtue.

In fact, political sociologists have long ago taught us that a police force becomes an efficacious, firm and just instrument of the rule of law only in those societies where a moral consensus permeates political and administrative arrangements. Elsewhere, the onus rests with civil society to assert and defend that moral consensus. For instance, the widespread demonstrations in the US over George Floyd’s murder by a policeman represent society’s moral expectation that law-enforcers will not overstep the boundaries of law and fairness.

Watch | Who Did Not Want Vikas Dubey to Survive Another Day?

The demonstrations found an echo beyond American borders but in India we were content to studiously ignore its meaning and significance. A society that finds merit in applauding police highhandedness towards minorities can hardly be expected to get excited about death in a distant land. Moreover, perhaps because we know that our politics and politicians have worked in tandem for many decades to dissipate the moral consensus that sustains the majesty of the law.

Even in the ‘New India’, we have preferred to carry on with the bad habits of the old. In fact, we have been goaded to become besotted with violence, and are not prepared to accept any restraints on the official exercise of it. Lawlessness by others, of course, will not be tolerated; but the officially empowered can take the law in their hands and act in any way they please. That is how the Kanpur police felt unconstrained to sort out Vikas Dubey once and for all. 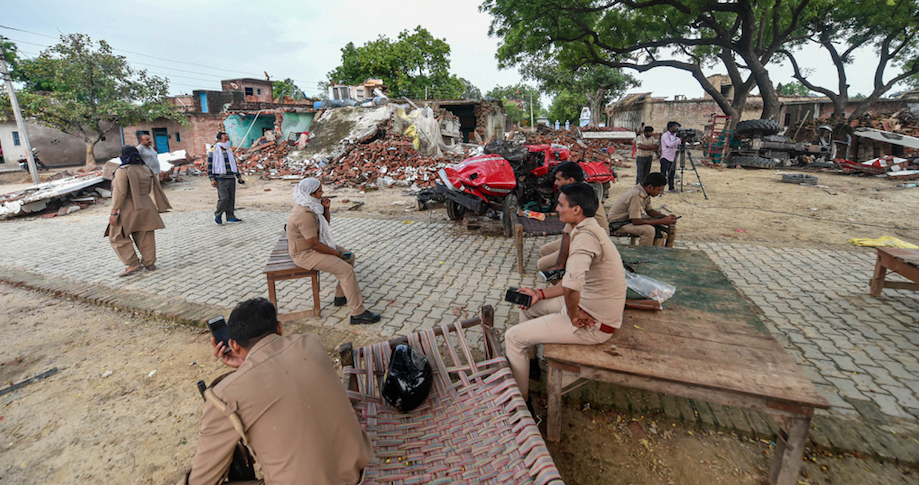 Granted, this is not a new malignancy. We have relied, erratically and ineffectively, on the intervention of the higher courts to uphold the illusions of rule of law against the entrenched police-criminal-politicians nexus. Yet, we are entitled to our dismay at the celebration of police vigilantism, just as we are entitled to expect the higher judiciary to arouse itself out of its institutional stupor and deference to the managers of New India.

While it remains to be seen what the judiciary will do to ensure India’s formal status as a republic of laws, it is clear that the very public demonstrativeness of the Kanpur encounter was intended to serve a well-defined political purpose and design.

The political calculation is that the Kanpur encounter will more or less ensure a second term for the BJP under Adityanath when Uttar Pradesh goes to the polls in March 2022. Himself no stranger to idiom of violence, the chief minister is portraying himself as an austere and unflinching administrator, who will go after criminals, irrespective of their caste or religion. No one should be surprised if the UP CM gets, in the next few months, a public certificate of admiration from the chief priest himself.

Vikas Dubey’s utility to politicians as a gangster was the help he gave them in winning elections in his bailiwick. Now, he is going to be much more useful in death than he ever was in life. His killing will be paraded around as a trophy for a ‘Hindufied’ governance that can countenance the gunning down of an outlaw who was often serenaded as a “brahmin sher.” or lion. It may be just a coincidence that Dubey’s victims were also Brahmin policemen. Consequently, his death will hold a certain appeal for the middle classes across the caste divide. And, there may even be a secular dividend: see, they will say, the chief minister’s wrath is not just confined to the Muslims, he will come down heavily on anyone who dares mock the might of his law and order machinery.

The BJP is adept at the politics of symbolism and can be relied upon not to let the Vikas Dubey encounter fade away from public memory. When the time comes, Kanpur will be marketed as the new Pulwama/Balakot lodestone.

The Brahmin community, which since Nehru’s days has fancied itself as the king-maker, has been coerced into coming to terms with the new Thakur dominance. With this reordering of arrangements among the caste Hindus, the social coalition propping up the Yogi regime stands consolidated and the Yogi himself emerges as a refurbished face of the BJP in Uttar Pradesh.

More importantly, the ramifications of this process will be felt beyond UP.

The good yogi has inched his way ahead in the BJP national pack. Leaving Amit Shah behind, he has positioned himself as the most authentic successor to Narendra Modi.