Despite widespread opposition to the Bill over concerns of data privacy, potential for abuse and infringement on fundamental rights, it was passed by voice vote in the lower house on Monday. 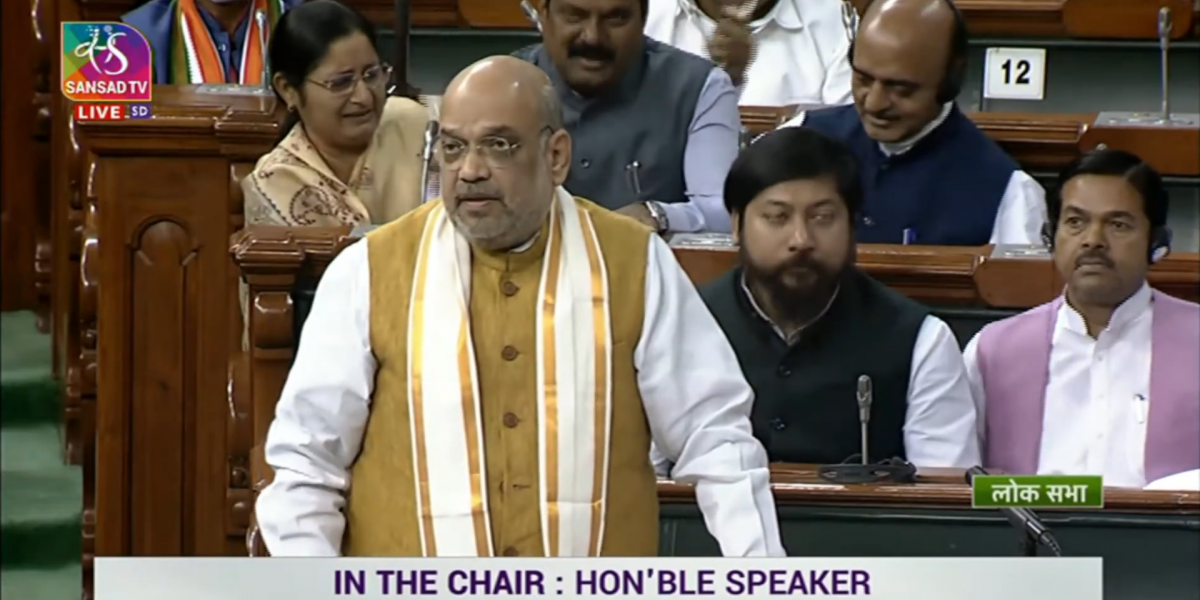 New Delhi: The Lok Sabha on Monday, April 4, passed by voice vote the Criminal Procedure (Identification) Bill, 2022, which seeks to expand the powers of investigating officers to collect biometric details of prisoners.

Moreover, the Bill also proposes that police personnel be allowed to collect behavioural attributes of prisoners, including handwriting samples and signatures.

The Union government has also sought the repeal of the current Identification of Prisoners Act, 1920, under which the police is only allowed to make finger and foot impressions, that too, for only a limited category of convicts and non-convicted persons.

Addressing the lower house, Union home minister Amit Shah said that the sole objective of this Bill was to increase conviction rates. Citing National Crime Records Bureau (NCRB) data from 2020, Shah pointed out the low conviction rates in cases of serious crimes such as murder (44%), rape (39%), attempted murder (24%), robbery (38%) and so on.

He compared these figures to average conviction rates in several western countries, such as Canada (68%), the UK (83.6%), the US (93%) and more, calling these countries “champions of human rights” as they had more stringent laws in place.

He also called the new Bill the ‘T’ in Prime Minister Narendra Modi’s call for ‘SMART’ policing in 2014. ‘SMART’ stands for ‘Strict and Sensitive, Modern and Mobile, Alert and Accountable, Reliable and Responsive, Techno savvy and Trained’.

When the Bill was introduced in parliament a week ago by Minister of State for Home Affairs Ajay Mishra ‘Teni’, several opposition leaders had raised concerns on its adverse implications for human rights and had called for the Bill to be referred to a parliamentary standing committee or a select committee for detailed deliberations.

Congress leader Adhir Ranjan Chowdhary called the legislation “draconian” and said it infringed upon the right to privacy.

Similarly, Congress MP Manish Tiwari called it “illegal” and in violation of Articles 14 (equality before law), 19 (freedom of speech), 20 (3) (right against self-incrimination) and 21 (protection of life and personal liberty).

“If I am arrested for picketing for protection of civil rights or any genuine demand, and if an FIR has been launched against me, then a DNA test will be taken. What is this? This is a violation of the basic rights of an individual. What is the logic? What is the reason?” asked Revolutionary Socialist Party MP from Kerala, N.K. Premachandran

Apart from these, other opposition MPs raised concerns over the potential for misuse in the legislation as well as data privacy.

Responding to the debates, Home Minister Shah said that some of the opposition’s concerns were valid and that they would be addressed while the rules under the Bill are formulated. On the topic of data privacy, Shah said that a “technology-driven, fool-proof mechanism” will be put in place to prevent data leaks.

Thereafter, regarding concerns about individuals detained under any preventive law, Shah said that these individuals will not be forced to provide samples and that no narco-analysis or brain mapping will be done without an individual’s consent. However, such individuals will be allowed to offer their own samples, the Hindu reported.

Biological samples can be forcibly collected from individuals arrested or convicted for crimes against women or children; those arrested or convicted where the punishment awarded is a jail term in excess of seven years; and in cases where a magistrate has specifically ordered the collection of these samples.

Any refusal to furnish samples in these cases will attract a three-month prison term and a fine of Rs 500 or both under Indian Penal Code Section 186 (obstructing a public servant).

Moreover, Shah said that the government is also drafting a new model prison manual where the various concerns will be addressed. This manual, according to Shah, will include provisions on the rehabilitation of prisoners, limiting the rights of prison officials and so on.

As such, Shah urged opposition members not to consider the Bill in isolation, but in conjunction with the forthcoming prison manual, as well as other Union government initiatives for dealing with “next-gen” crimes, such as the setting up of forensic science universities and a ‘Modus Operandi’ bureau in the Home Ministry to study criminal trends.

He also noted that consultations were underway to revise the Indian Penal Code and the Code for Criminal Procedure.

In a detailed response to the Bill in the Lok Sabha, Trinamool Congress (TMC) MP Mahua Moitra said that the law being repealed – that is, the Identification of Prisoners Act – is a British Colonial era law, yet the new Bill is more intrusive and has fewer checks and balances that the one being repealed.

Moitra also noted that the new Bill is being brought in without any overreaching data protection law being in place in the country. A Personal Data Protection Bill had been introduced in 2019, but had been referred to a Joint Parliamentary Committee thereafter and has not, as yet, been drafted.

On the government’s claim that the new Bill is being brought in to keep up with the advancements in technology over the past ten years, the TMC MP notes that these advancements also expand the surveillance powers of the state and that, without adequate safeguards, the new Bill has the potential to provide inordinately wide discretionary powers to the government.

Opposition MPs even took to Twitter to voice their issues with the Bill. Bahujan Samaj Party (BSP) MP Kunwar Danish Ali said that the Bill would lead to a “police state” in the country, likening the Bill’s potential for abuse to that of the Unlawful Activities (Prevention) Act.

Criminal Procedure Identification Bill will surely lead us to a #PoliceState. Raising voice against human rights violations will be a crime in ‘New India’. With the misuse of #UAPA, peaceful and innocent #antiCAA protesters are still languishing in jails. https://t.co/K77Psf2JYo